This paper will evaluate the Oprah Winfrey Eulogy for Rosa Parks “…God uses good people to do great things.” The purpose of this speech to evaluate Oprah Winfrey speech utilizing the critical thinking skills that have been acquired during term. The paper explains the purpose of the speech as well as answers questions to why words or phases were selected.

Given the General Education Assignment in my Critical Thinking class was to evaluate the famous eulogy that Oprah Winfrey had spoken on October 31, 2005 at Metropolitan AME Church in Washington, D.

Turn in your highest-quality paper
Get a qualified writer to help you with
“ Oprah Winfrey Eulogy for Rosa Parks ”
Get high-quality paper
NEW! AI matching with writers

C. for Rosa Parks. This speech was given in front of Reverend Braxton, family, friend, admirers, and the amazing choir. The purpose of this speech was for people to understand young Oprah’s Winfrey appreciation of Rosa Parks and what she did Oprah’s speech is about the effect that Rosa Parks had on her as a child growing up in the South, during height of the Civil Rights Movement. Oprah remembered as a child, how her father explained to her about this colored woman (Rosa Parks) who had refused to give up her seat and in her mind, she thought “she must be really big.

Oprah imagined that Rosa Parks must be at least 100 feet tall and must be a stalwart, strong, and carrying a shield to hold back all the white folks. This is especially significant, considering that unlike the few black public figures of the time who were ministers, athletes, and entertainers. Rosa Parks was a regular person, a house keeper who rode the bus like young Oprah herself.

Oprah Winfrey began to state how it was an honor for her as a “colored person” to be able to present a speech for a well known African American female hero. I personally found it interesting that Oprah used the term “colored” to describe African American people considering it’s been deemed inappropriate for the better part of the last forty years or so. This term “colored” is offset by a set of quotations which relates back to Fundamentals of Critical Thinking by Burton Porter in Chapter 2, where he states that in the process of communication we usually employ words to convey some meaning, but occasionally we refer only to the words themselves and not to what they convey.

We know that in this case Oprah was using this word because it had a particular meaning which grouped all African American people. Oprah intentionally used this term that was looked at as negative at the time to exalt Rosa Park’s and her accomplishments This relates to how oppressed people has used terms to denigrate them and turn them around as terms of endearment or pride. Oprah’s speech went on to describe how Rosa’s sacrifices inspired her to become the woman that she became today. “Without that inspiration, after being raped at age 9 and having a baby at age 14, she may not have been able to work on the radio while still in high school or co-anchored the local evening news at age 19.” www.Oprah.com Oprah Winfrey was headed towards to the life of being a regular person just as Rosa Parks, living a normal life as many other African Americans, fighting for equal rights.

Oprah also thanked Rosa for herself, and for every colored girl, and colored boy, who didn’t have heroes who were celebrated. Referring back to Porter in Chapter 10, this was an inductive generalization of Rosa Park’s impact on Oprah and the world in general. Inductive generalization tends to get us in trouble as if did for Oprah in this speech because there was only a few sample statements based on one or two instances where a conclusion was drawn. Porter quotes George Hegel “An idea is always a generalization, and generalization is a property of thinking; to generalize means to think.” I would personally say this speech was very informal as it didn’t give specific examples of how Rosa actions impacted Oprah’s trajectory.

There is no definitive evidence that what Rosa Parks did impacted Oprah going on to become the most successful talk show host in the history of broadcasting. Don’t tell that to Oprah because she stated herself that she would not be where she is today if it had not been for Rosa Parks.

Overall, I believe that although this was an inductive speech, it highlighted Rosa Park’s impact on Oprah Winfrey and the Country in general. The language and terminology used in this speech does relate closely to the understanding of today’s literature. This speech was presented in a very straight forward way. The fact that Rosa Park’s did not give up her seat on the bus, to a white male, has made history for the Equal Rights Movement.

Oprah Winfrey Eulogy for Rosa Parks. (2021, May 15). Retrieved from http://studymoose.com/oprah-winfrey-eulogy-for-rosa-parks-essay 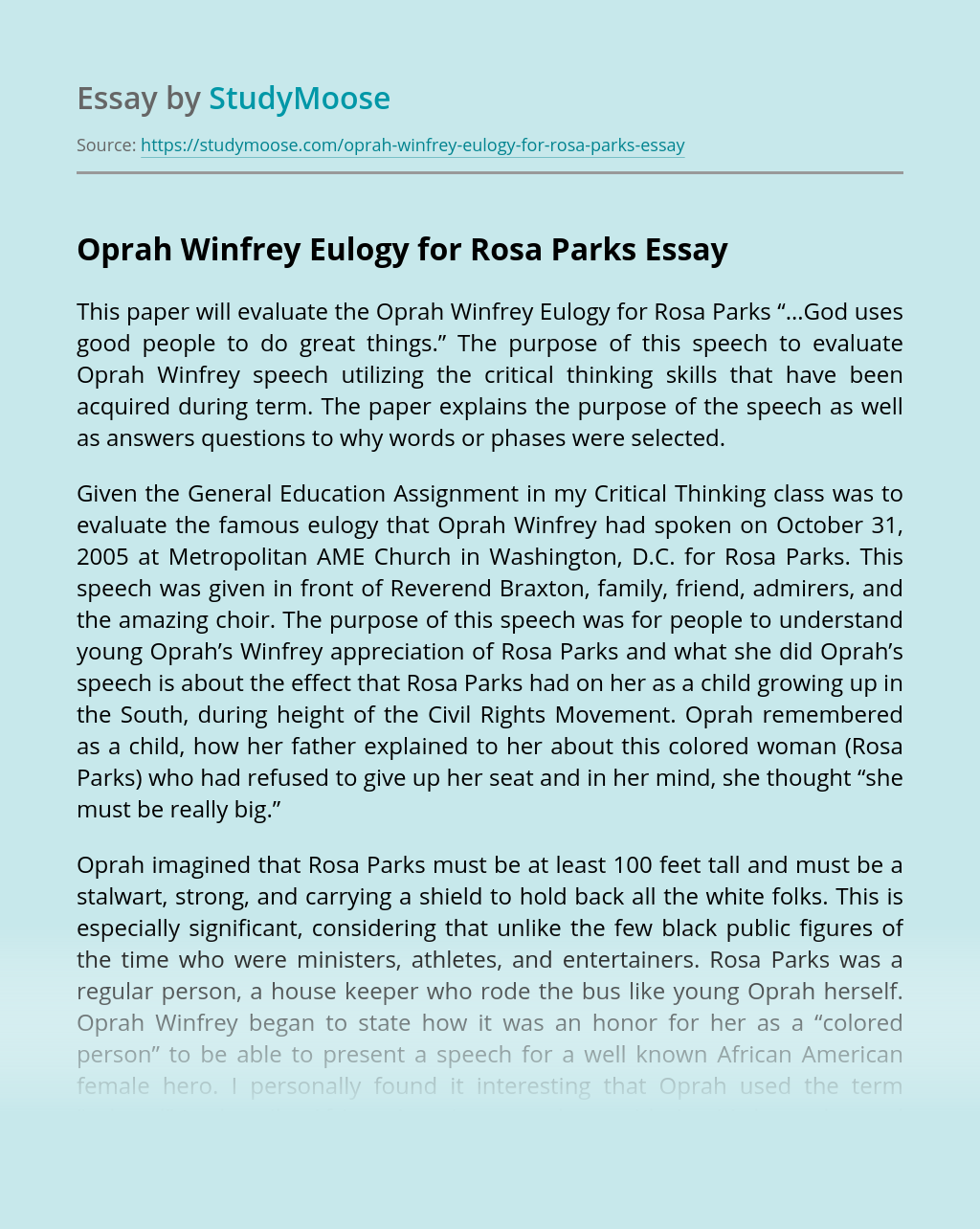 Turn in your highest-quality paper
Get a qualified writer to help you with
“ Oprah Winfrey Eulogy for Rosa Parks ”
Get high-quality paper
Helping students since 2015
Stay Safe, Stay Original