In the opening scene of Macbeth, how does Shakespeare set the atmosphere for what will happen later in the play?

In the opening scene of Macbeth, how does Shakespeare set the atmosphere for what will happen later in the play?

‘Macbeth’ is set in Scotland. At the time, Scotland was united with England because James 1 of England also became James V1 of Scotland, the first monarch to rule both countries.

‘Macbeth’ was written in 1606. This was just a year before the Gunpowder Plot, led by Guy Fawkes, attempted to kill the king and destroy the Houses of Parliament. During this period English society was full of treachery and nobody could be trusted.

Don't use plagiarized sources. Get your custom essay on
“ In the opening scene of Macbeth, how does Shakespeare set the atmosphere for what will happen later in the play? ”
Get custom paper
NEW! smart matching with writer

Also, at this time, there was very little technology and no scientific explanation for strange goings on, such as the miscarriage of babies. Many people, therefore, believed that witchcraft and ‘agents of the devil’ were responsible for anything that could not be explained. Shakespeare draws on these superstitions when he uses the witches to set the scene at the opening of ‘Macbeth’.

It is believed that William Shakespeare wrote ‘Macbeth’ to be performed at the royal court to impress and flatter the new king.

James 1 himself believed in witches and that his life was once threatened by them. The King, and the people of that time, could relate to ‘Macbeth’ because they were very religious and superstitious whilst also believing in the work of the devil. This stage in English history, and also in the history of drama and literature, was called the ‘Jacobean’ age.

Act one, scene one of the play is all about the witches. Shakespeare chose to have the witches there at the start of the play to show that the theme of evil will follow throughout the play.

The audience would understand immediately that evil is around because the music and lighting would tie in with their image of evil. In the Polanski film version, aimed at modern audiences, the setting for the witches, on an empty beach in the winter, is very dull and cold. The colours especially help to create this feeling. Beaches are often deserted during winter months so this was an ideal setting for the supernatural events to occur. If it were set in the summer on a crowded beach it would not have the same effect on the audience.

Given the opportunity to stage this opening scene, my witches would wear drab and dark coloured rags with holes ripped out of them for the arms and neck to come through. They would have long, greasy black hair coming down over their faces. A long, crooked nose would poke through the hair and possibly bear a large, hairy wart on the end of it. The women would be old and wrinkled with warts and moles in very prominent places. This description is of course a very stereotypical view of witches. The audience would immediately relate to the women being witches if this description was used.

In both the Polanski version and the cartoon film, ‘Animated Tales’, the music is discordant and unharmonious. I too would use this type of music in the staging of this opening scene as it would unsettle the audience and remind them that evil is very much the theme of this play.

In my production, the lighting would be dim and the action set at night, the time when people believed that evil was about, and when the devil did his work. Lightning and thunder would be present when the witches first enter onto the stage Shakespeare also chose to have this as a stage direction in his play, “Thunder and Lightning. Enter three witches”. This type of weather has long been associated with evil because powerful forces are released and for many centuries there was no explanation for it. If the three witches then emerge shrouded in smoke, not only would it create atmosphere but also add to the supernatural appearance of the witches making them look as if they are hovering above the ground.

The witches speak as if they are always plotting and are very careful not to be seen by anyone apart from their victims. This becomes obvious when they are only seen in the play in unsociable hours. The first witch says, “When shall we three meet again?” This is the first line in the whole play and I think it is chosen because it immediately lets the audience know that they are up to something.

The first five and the last two lines are all in rhyme. Although much of Shakespeare’s work is written in verse, I think rhyming is used in this scene because it is typical of witches, especially in casting the spells that they make around big, bubbling cauldrons.

The term “Fair is foul and foul is fair”, is used by the three witches at the end of this first scene. They all say this together in a kind of a chant to emphasise it and to make it stand out over the other language in the rest of the scene. I think that this riddle implies that the end result will come whether it be by ‘fair’ and honest means or by ‘foul’ unfairness and ruthlessness.

Macbeth’s name is mentioned in this scene to inform the audience that the meeting of Macbeth and the three witches later on in the play is not a coincidence, and that they are planning to meet him. It also displays that Macbeth has an important role in the play and is somebody the audience should concentrate on in the later scenes.

The witches’ knowledge and flattery of Macbeth in scene three, for example “All hail Macbeth! That shalt be king hereafter” leads the audience to think that he is being encouraged by them to become the King by any means, ruthless or not. The audience’s reaction to this would be a strong dislike of the witches. If the witches did not give Macbeth this prophecy he would probably not have tried to force his way onto the throne and would still have been an honest and loyal ‘Thane’.

In conclusion, this scene identifies Macbeth and links him to the future evil and tragic events that will unfold during the play. Although the witches must take some blame for influencing Macbeth with their prophesies and temptations, he has free will and could have chosen not to use evil methods to make their predictions come true.

In the opening scene of Macbeth, how does Shakespeare set the atmosphere for what will happen later in the play?. (2020, Jun 02). Retrieved from https://studymoose.com/opening-scene-macbeth-shakespeare-set-atmosphere-will-happen-later-play-new-essay 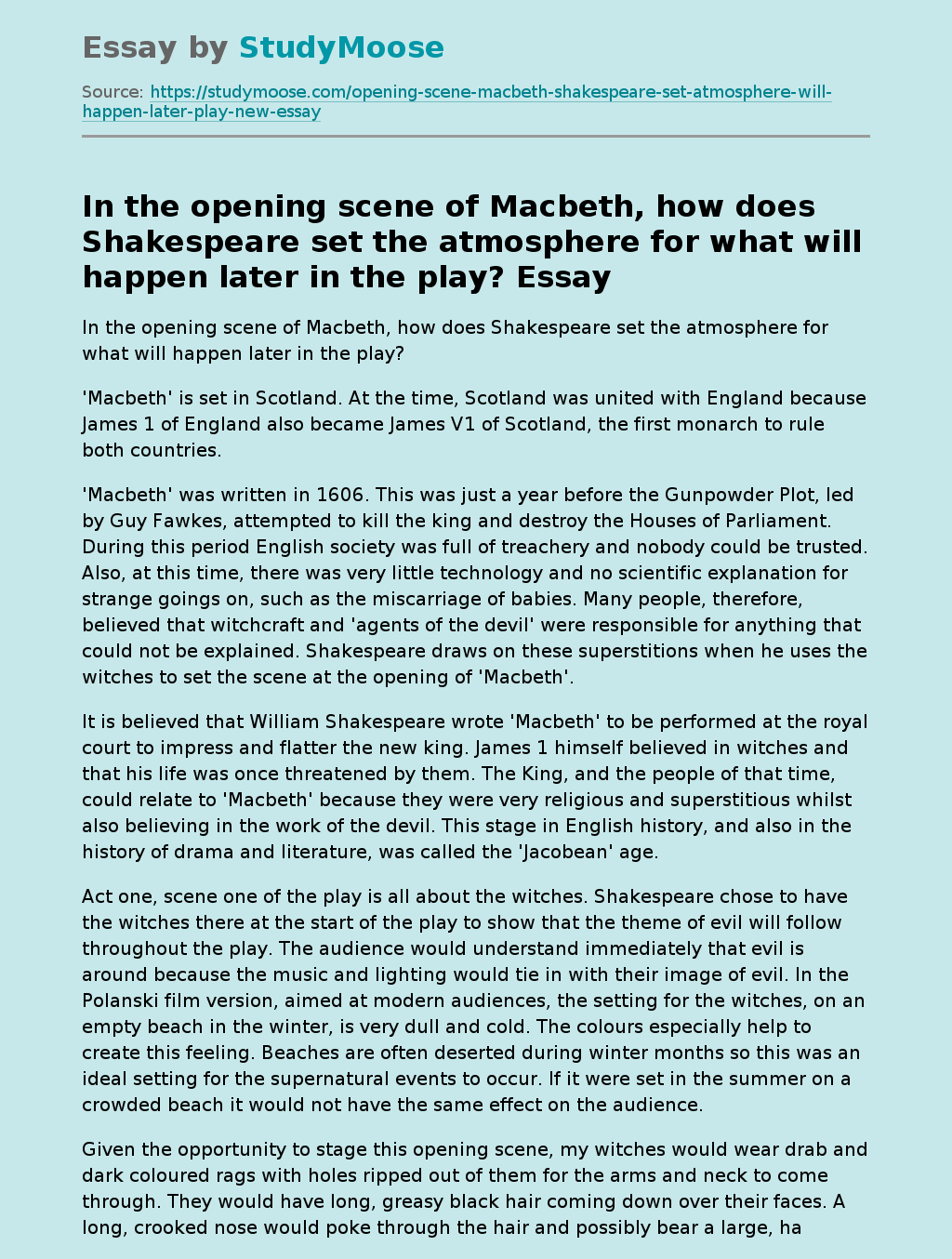