One Flew over the Cuckoo's Nest Response to Literature

Society is a judgmental and rejecting place. It only allows uniform individuals to be in this society which discards anyone’s individuality and pride. In the novel, One Flew Over the Cuckoo’s Nest, by Ken Kesey, Nurse Ratched alienates the patients’ individualities which only allows them to never progress in their mental health. The society rejects the people who are not normal. In this case, the people are the ones with mental disorders.

Kesey’s anti-establishment point of view against society portrays that the government misuses power to manipulate society which leads to the suppression of individuality through the literary devices analogy, metaphor, and symbolism.

Don't use plagiarized sources. Get your custom essay on
“ One Flew over the Cuckoo’s Nest Response to Literature ”
Get custom paper
NEW! smart matching with writer

Ken Kesey conveys his theme by vividly explaining the “pecking party”. As one of the treatments, Nurse Ratched holds group therapy for the patients. During the group therapy session, McMurphy notices that the Nurse ignites all the conflict at first so he explains, “The flock gets sight of a spot of blood on some chicken and they all go to peckin’ at it” (Kesey 57).

McMurphy is trying to explain the abusiveness of Nurse Ratched’s power. This analogy supports Kesey’s message of how society rejects and leads to the suppression of individuals. Kesey uses the chickens to represent the patients and the “first peck” would represent Nurse Ratched because she manipulates an individual which causes uneasiness to the patient which will never be the cure for one who is mental to get better.

McMurphy’s rhetorical question signifies his opinion even more. This allows not only Harding, but the rest of the patients to see how Nurse Ratched is just another person and how they should not let her take complete control over them. Kesey furthers his analogy after the pecking party image because it reveals and justifies who really does “peck that first peck”.

This relates to the theme because Nurse Ratched represents the government while the patients represent society; concluding that the government continuously pecks at the individuals who feel that they are not a part of society. Overall, the pecking party is an analogy of how society suppresses one’s individuality because to be an individual one must “get better” like the patients attempt to do; but all they are doing are taking steps back due to Nurse Ratched. In One Flew Over the Cuckoo’s Nest, Kesey demonstrates his use of metaphors through machinery comparisons to portray the theme of suppression of an individual.

When Bromden characterizes Nurse Ratched he says, “So she really lets herself go and her painted smile twists, stretches to an open snarl, and she blows up bigger and bigger, big as a tractor, so big I can smell the machinery inside the way you smell a motor pulling too big a load. ” (5). Bromden sees Nurse Ratched as machinery and not as a human being. This supports the fact that the ward is like a factory, just waiting to make patients into “products”. Kesey uses metaphor to compare Nurse Ratched to machinery because this describes her persona perfectly.

Like a machine, Nurse Ratched is very smooth and calm about things at first but like every machine there are flaws. When Nurse Ratched meets her flaws, that is when things begin to go haywire like a machine. It can either breakdown or malfunction but it is always repairable. When Bromden has the dream about Blastic, he thinks “…I was looking to see – just a shower of rust and ashes, and now and again a piece of wire or glass” (88). The significance of Bromden’s dream is that it represents how the ward is inhumane because “a shower of rust and ashes” fell out of Blastic’s body instead of human organs.

Kesey exemplifies metaphor through Bromden’s dream by explaining how society’s standards of being “accepted” can transform one to be inhumane and to lose their individuality. Overall, these comparisons relate to the theme having the machines represent a form of government, standing in the way, or suppressing, the individual, or society. This can support the main theme that society abuses their power to manipulate and suppress the individuality of others. Fog is used by Kesey to demonstrate them and to symbolize the aloneness and individuality of a patient.

Bromden describes the effects of fog when he thinks, “I don’t have to end up at that door if I stay still when the fog comes over me and just keep quiet” (132). This explains how much control Nurse Ratched had over the patients. It demonstrates how something like fog takes away their individuality be they “just keep quiet”. The fog symbolizes a safe zone and aloneness for the patients because Nurse Ratched had so much authority over the patients that it was like a crib holding them while she was out. Kesey’s theme is supported in this because society takes away individuality as well as fog does.

One characteristic they both share is the way they manipulate and abuse their power. Bromden also thinks about fog when he said, “You had a choice: you could either strain and look at things that appeared in front of you in the fog, painful as it might be, or you could relax and lose yourself” (131). Bromden describes how the patients were almost forced to be in the fog because “you could relax and lose yourself” and that the time that is all the patients really want. The fog also symbolizes a scapegoat for the patients so they don’t have to face all the challenges ahead because “you had a choice”.

A simple break from everything, especially Nurse Ratched. This furthers Kesey’s message of how the fog is another form of control from Nurse Ratched, in which she abuses her power by manipulating her patients so they cannot get better. Ken Kesey uses analogy, metaphor, and symbolism to demonstrate how society uses their power to manipulate others which leads to a suppressed individual. He uses examples from the ward to compare the real outside world with a mental asylum. This world and society focus too much on how to fit in and it has become more of a moral thing to fit in than to be one’s self.

Kesey blames it on the establishment that people are suppressed of their individuality, but is that really true? It has become a custom rather than a rule and that needs to change; and it starts from being a leader and an individual rather than a follower. The real story of individuals is not within the establishment, but it is within a person. To express that is to depending on the person and that is the problem in our society, no one likes to be that person to step up and be the first to go. But if someone were to do it, our society would change instantly.

One Flew over the Cuckoo's Nest Response to Literature. (2017, Mar 04). Retrieved from https://studymoose.com/one-flew-over-the-cuckoos-nest-response-to-literature-essay 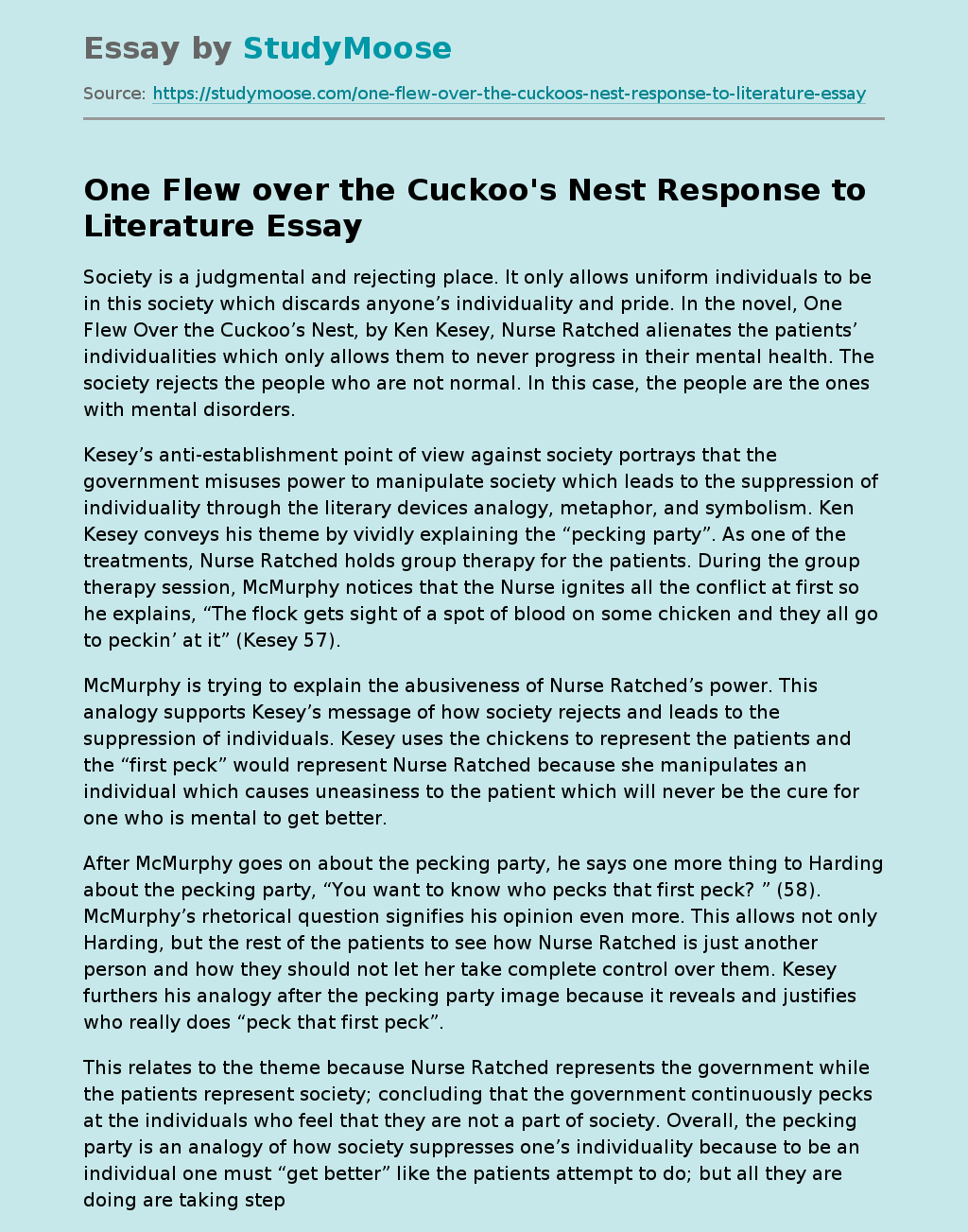