One Flew Over the Cuckoo’s Nest Book Review

The novel One Flew Over the Cuckoo’s Nest (Kesey, 1962) is narrated from the point of view of a character called “The Chief” who is an inmate of the mental asylum in which the story takes place. The book opens with a scene where the Chief is sweeping the floor and ends with the Chief escaping from the asylum, and so the changing perceptions of the Chief are a key to the main messages of the book. The character who occupies most of the action in the book is a rebellious newcomer called McMurphy.

Don't use plagiarized sources. Get your custom essay on
“ One Flew Over the Cuckoo’s Nest Book Review ”
Get custom paper
NEW! smart matching with writer

It is McMurphy who is the catalyst for the change in the Chief, showing him a both a different way to see the asylum and a number of strategies of resistance which ultimately allow the Chief to break free. This paper will analyse how the Chief perceives the asylum in the early stages of the book, focusing especially on the concept of “the Combine”. After that Murphy’s view of the world will be presented, along with his various resistance strategies.

In conclusion the Chief’s revised view of “the Combine” will be analysed, showing what has changed in his understanding of the world of the asylum, and of the world in general.

At the start of the book it is not immediately evident that the Chief is mentally ill. He explains that he is half Indian and chooses to be deaf and dumb: “I’m cagey enough to fool them that much” (Kesey, p. 9) His separation from the world of sound is presented as a deliberate defence against oppression, but the reader may suspect that it is a symptom of a mental illness like paranoia or schizophrenia.

It is a feature of the book that medical descriptions are avoided, and the reader is left to figure out for him or herself whether or not, or to what extent the characters are ill or mad.

The Chief imagines the Big Nurse having powers that extend via wires which only he can see: “I see her sit in the centre of this web of wires like a watchful robot, tend her network with mechanical insect skill…” (Kesey, p. 27). He imagines that she is working to control the world outside the institution also, suggesting that there is a huge conspiracy against him and the other inmates called “the Combine” which he defines as “a huge organization that aims to adjust the Outside as well as the Inside” (Kesey, p. 27).

This analogy works both as a description of a delusion, with no basis in reality, and as an artistic representation of an institution (the asylum) and a wider authoritarian society (conservative American society in the early 1960s) which operates on a rigid and inhuman basis. At the start of the book the Chief, and through him the reader, feel this cold, hard, oppressive force and see the inmates as victims of its power. One way of making this chilling force constantly present in the narrative is the Chief’s use of vocabulary relating to machinery to describe all of the asylum personnel.

The three “black boys” who are orderlies working for the Big Nurse speak with the “hum of black machinery” (Kesey, p. 9) and the most frightening of all is Nurse Ratched herself: “She works the hinges of her elbows and fingers … She starts moving,…when she rumbles past she’s already as big as a truck, trailing that wicker bag behind her in her exhaust like a semi behind a Jimmy Diesel… and her smile’s going out before her like a radiator grill. ” (Kesey, p 79). These are inhuman images used to describe the leaders of an inhuman regime.

The arrival of McMurphy into the story makes a huge impression on the Chief who, despite his huge size, is cowering and fearful of the cold and all-controlling power of the Combine. The first impression is of McMurphy’s “loud brassy voice” (Kesey, p. 14) Chief significantly makes a connection between this voice and the voice of his Indian father: “He talks a little the way Papa used to, voice loud and full of hell…” Shortly after this the ward is stunned by the sound of McMurphy’s laughter, which is strange to them because no one ever laughs in this oppressive place.

So much of McMurphy’s verbal behaviour is a surprise to the ward: his laughing, singing and ironic banter are all examples of a language the inmates have forgotten the meaning of. This is one of the most important aspects of McMurphy’s influence. He reminds the inmates of a different kind of communication with authority and with each other that is free and spontaneous, unconcerned about the hierarchies of the asylum context, and taking everything less seriously than the authorities intend things to be taken.

McMurphy mocks people, including his friends, in order to show that there is more than just one way of seeing things, and that the asylum’s regime is ridiculous when viewed from outside perspectives. He argues with the Big Nurse, and he laughs at her rants and rages. This is a subversive attitude, and it sparks new thoughts in all the inmates, setting off a chain reaction of awareness that cannot be stopped.

The first meeting of McMurphy and the Chief is also an important moment in the book, and this time the Chief is struck by the touch of McMurphy’s hand: “It rang with blood and power” (Kesey, p. 25). Later, when sweeping out the sleeping area, the Chief notices a smell that he has never encountered before in all this time on the ward; “the man smell of dust and dirt from the open fields, and sweat, and work. ” (Kesey, p. 83). It is as if the Chief is rediscovering through the presence of McMurphy, all the natural human senses which had been dulled or switched out of commission by the Combine.

Just by being himself McMurphy reawakens the warm, human qualities of the inmates and shows them how to use these qualities against the hard, cold machinery of power. The world that McMurphy represents is offered as a contrast to the regimented, controlled environment of the ward. There is nothing particularly radical about what he represents, for example setting up a voting process to determine the television viewing schedule for the inmates, but in the upside-down regime of the Combine this appears to be a shocking suggestion.

Drinking, smoking marijuana and sex with prostitutes are, in the world outside the asylum, quite ordinary and natural expressions of normal masculine behaviour in large sections of the community. It is the abuse of power by the Big Nurse in talking to Billy Bibbit’s mother that turns the antics of the inmates from a prank into a tragedy. In every society it is common for young males to push boundaries and experiment with things that are forbidden by teachers, parents and authority figures.

It is part of normal growing up. The irony of the asylum is, that it takes an oppressed youngster like Billy and then just when he catches a glimpse of sexual and other kinds of freedom via McMurphy, crushes his spirit so completely that he takes his own life. The book depicts a struggle for power over the inmates: “As the many symbols and images indicate, the central theme of One Flew Over the Cuckoo’s Nest is the restoration of the inmates’ individual and collective potency. (Lupack, 1995, p. 94).

Whether as group, or as separate individuals, McMurphy encourages the inmates to take back the power that has been unjustly stolen from them by the institution. Some critics have seen McMurphy in religious terms, as a character who sacrifices himself in order to save his brothers: “The fishing scene is an extended figure of Christ and his disciples, and instance of McMurphy as fisher of men. ” (Hicks, 1981, p. 174). Hicks points out that there are images of the cross and the crown of thorns in descriptions of the electric shock table, and that McMurphy’s men are “physically cannibalizing him” (1981, p. 5) by wearing him out more and more as he transfers his power and energy over to them. It is true that as McMurphy’s influence grows, more and more of the inmates rebel or discharge themselves, or in the case of the Chief, make a spectacular escape but this is a book that does not come with a happy ending and salvation in a heavenly future. McMurphy is turned into a lobotomized shell of his old self which the Chief kills out of mercy, as an Indian would kill an injured animal.

The future of the other characters is not known. The freedom that the Chief gains is a freedom from the real and imagined “wires and connections” (Kesey, p. 254) that he rips up when he throws the control box out of the window. In conclusion, then, it appears that the Chief has changed his view of the Combine. He leaves the delusions and the asylum behind but he still must navigate his way in the outside world. It remains to be seen how he will tackle the Combine-like injustices and oppressive forces in the wider world.

He does not have his mentor McMurphy with him, and must only go back to where he started and try to reintegrate into a community that has been oppressed and exploited by the building of a great dam. The great difference at the end of the book is that that he wants to go back to his old haunts “just to bring some of it clear in my mind again” (Kesey, p. 254) and thanks to the example shown by McMurphy, he can now do this with courage and clarity, seeing possibilities of collective resistance rather than just being isolated and crushed by overwhelming institutional power.

One Flew Over the Cuckoo’s Nest Book Review. (2016, Sep 23). Retrieved from https://studymoose.com/one-flew-over-the-cuckoos-nest-book-review-essay 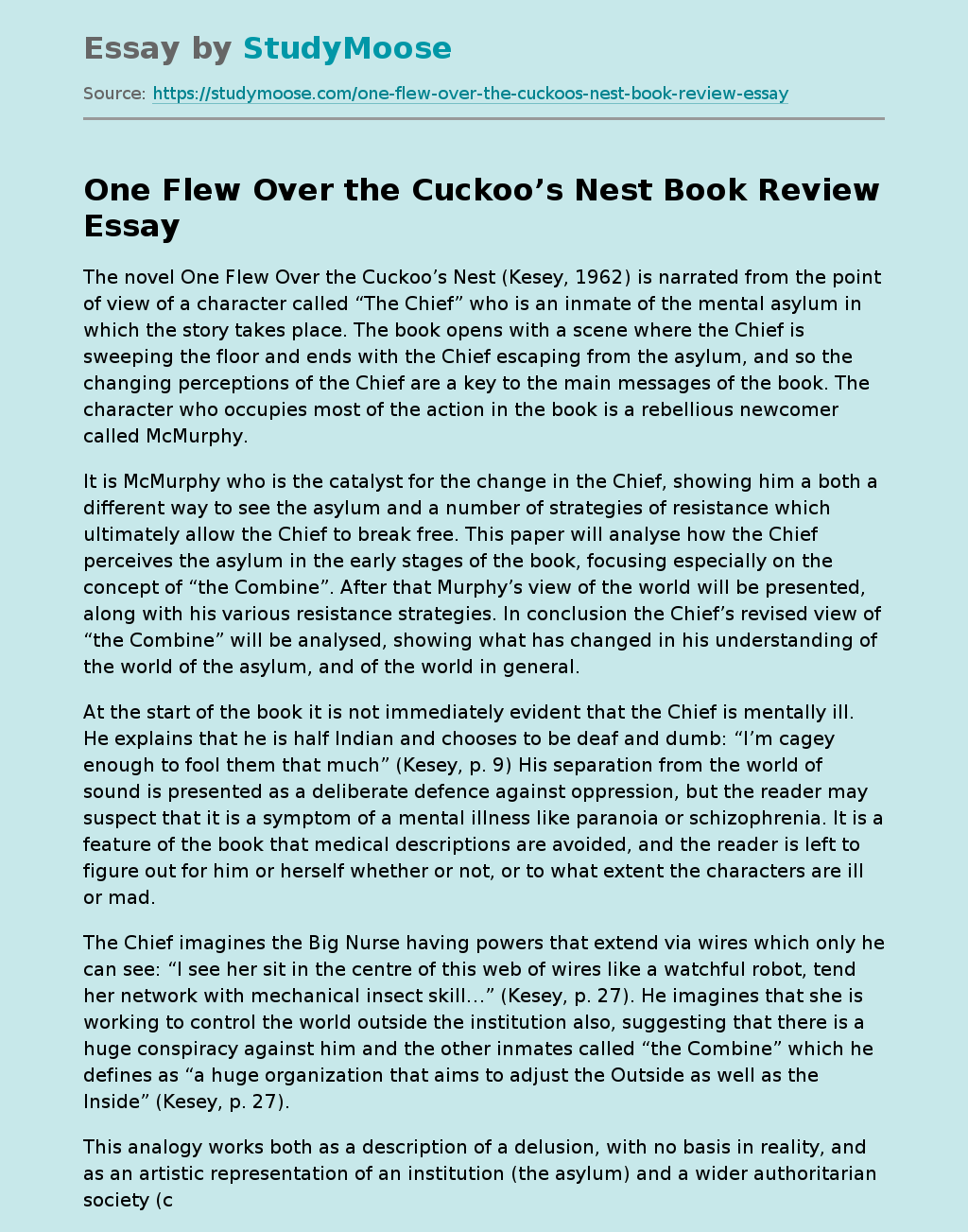