On the theme of Modern mystery, Sir Arthur Conan Doyle is one of the most popular authors, who introduced to the legendary detective of the Fictional world, Sherlock Holmes and his companion Dr. Watson. Doyle has written over 50 short stories and 4 novels featuring the Holmes and Watson that are milestones of the kind.

Doyle also has written plays, romances, poetry and nonfiction other than his Sherlock genre work. It has been over 125 years when his first Sherlock novel was published. The reason people loved the story of Sherlock Holmes is because of the unique wring style of Conan Doyle.

The stories of Sherlock Holmes were one of the best selling stories in the 19th century. The dynamic duo of Sherlock and his companion, Dr. Watson is one of the greatest formations of character in the world of literature. “A study in scarlet” is considered one of the first (or even the first) detective novels. It is a mix of mystery and suspense together into one.

Holmes is introduced as a brilliant and peculiar individual whose success in solving crimes derives from his powers of observation and deductive reasoning. Another main character, Watson is his loyal companion who narrates the stories and is an everyman stand-in for the reader. His works feature specific allusions to events and tensions during the era in which Doyle was writing, in addition to referencing other popular writers, philosophers, and musicians.

Conan Doyle also uses wording that we would not use normally to keep the reader’s attention and to portray that they are in an older time period than the time the book was published.

The wording also usually includes colorful and descriptive words such as, “Seldom have I seen so graceful a figure” rather than saying you have a beautiful face. Conan Doyle makes his characters sound as if they were in the 17th century instead of the 19th century. That is one of the many ways Conan Doyle writes his magical pieces.

Arthur Conan Doyle’s writing style is unique and wildly entertaining. Doyle’s technique of writing in most of his book consists of literary devices and intense vocabulary, and is seen consistent throughout his works. Doyle’s use of metaphor and imagery frequently appear throughout his stories, giving more detail representation to the story.

One of Conan Doyle’s most noticeable styles is the wide use of adjectives to provide great detail for the reader. The reader can similarly picture themselves to the surroundings as they are portrayed, placing themselves in the environment. Each of the novels is told in a linear style, from the first-person point of view of Holmes’ partner Dr. John Watson. Watson spares no detail as he recounts the tale, typically in a mysterious manner extracting every bit of exposure that can be transferred to the reader.

Each of the novels is told in the first person past tense of Watson, however it is told as if the intention of the message is to create suspense and anticipation. Watson reveals only those details that he is ready to, waiting for the “big reveal” later in the tale. Watson controls the story firmly by gathering great detail for the reader, placing them directly in the scene.

Apart from Doyle’s writing techniques, the content is also unique and often based on the real world. It is said that Doyle was searching for a person to fit for the narrator for Sherlock Holmes book and read the articles of the real Dr. Watson, who was a surgeon of London in the 19th century, and Sherlock was an inspiration from Dr. Joseph bells, who was a former teacher of Sir Arthur Conan Doyle.

In addition, his stories are also based on real life events. “A study in Scarlet” showed Victorian culture, which actually increased the popularity of the book. In addition, Doyle’s story develops from a small story to a large conclusion that makes it appealing to the audiences and increases suspense in the readers mind.

As in the 20th century, Arthur Conan Doyle is still popular for his notable works, and his works has been adapted to various forms of media. The latest is in BBC Sherlock series; where there are the same characters and story but based on modern era. Sherlock is the beginning of the modern mystery era of the literature. Doyle’s styles of writing and context have given the best detective in the fictional world. 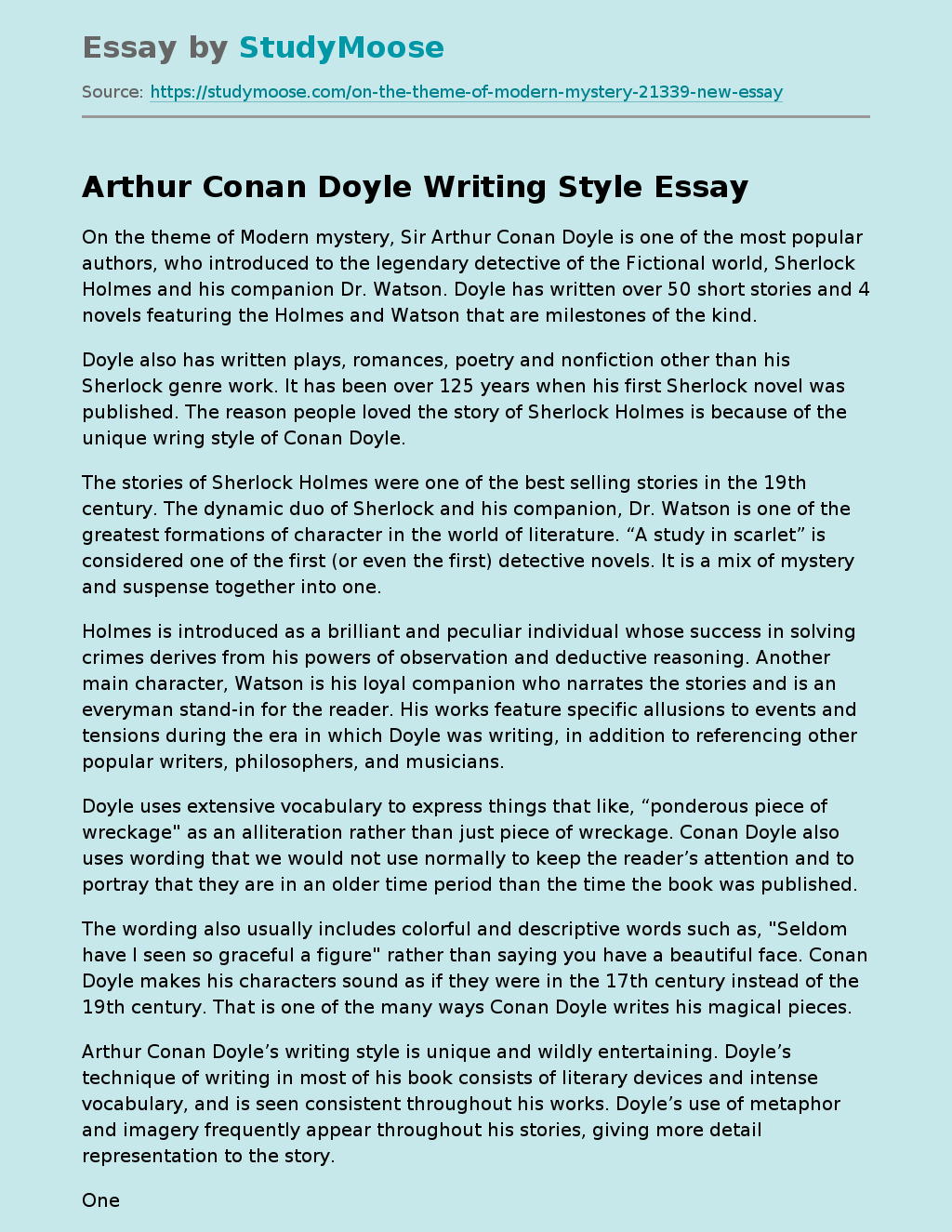