On Seeing England For the First Time by Jamaica Kincaid

When you see something for the first time as a child it’s fascinating to you. England is like a diamond in the rough to young Jamaica Kincaid. When she thinks about England, she sees a great place and it’s unlike anything she’s ever seen before. In the essay “On Seeing England for the First Time,” Jamaica Kincaid uses imagery, diction, and repetition to show her feelings of awe.

In the essay “On Seeing England for the First Time” Kincaid uses imagery to express her feelings of awe toward England.

Don't use plagiarized sources. Get your custom essay on
“ On Seeing England For the First Time by Jamaica Kincaid ”
Get custom paper
NEW! smart matching with writer

She compares England to “Jerusalem.” This shows her adoration, she is comparing England to the city of the bible. In Kincaid’s eyes England is a place that one aspires to visit. England is also described as “a very special jewel.” It’s considered rare and precious. In Kincaid’s eyes, England is valuable and should be venerated. When she sees England on a map for the first time she describes it as having “shadings of pink and green unlike any other shadings of pink and green.

” Kincaid considers England unique; it’s unique and unequal, even on a map. Kincaid also expresses her awe toward England by calling “its yellow form mysterious.” This signifies that England is mysterious to her, as if it holds some special secret. Kincaid has a big fascination with England and shows it using imagery.

Through the use of diction Jamaica Kincaid shows her feelings of wonder toward England. She uses the word “adoration” to illustrate how she admires and adores England.

Jamaica uses the word “greatness” to show that she considers England most important. “Gently” is used to show that England has no harshness or violence. Jamaica Kincaid calls England “meaningful.” She feels that it is significant and of importance to her. Kincaid proves her admiration for England through diction.

Throughout the Kincaid passage the phrase England is constantly repeated. Kincaid shows her admiration for England when she says “the people who got to wear England were English people.” Kincaid considers the people of England remarkable and they leave a lasting impression on her. To Kincaid “England was a special jewel…and only special people got to wear it.” Kincaid exhibits her admiration for England by giving up her preferences to emulate English behaviors. Kincaid states, “We somehow knew that in England they began the day with this meal called breakfast.” This is an expression of her admiration because even though eating a big meal so early in the morning is strange to her, she does it because she wants to imitate England. To Kincaid “made in England” means that whatever the product is, it came from a great place. Kincaid shows her fascination with England using repetition.

In this passage, Jamaica Kincaid uses diction, imagery, and repetition to show her feelings toward England. She shows fascination and awe using these literary terms.

In this essay titled, On Seeing England for the First Time Jamaica Kincaid subtly argues that England’s vain dominating presence, produced from the common admiration for England, played a negative role in her life. Kincaid develops this claim of England by battling the reality of England versus her childhood idea of England. Since this is the beginning of her work not only is the purpose to entice the reader but to also inform them of the “reality” of England which conquered her lifestyle and inhibited her natural growing culture. Kincaid writes in a serious, somber tone for people who also feel dominated by England or another culture.

Questions on Rhetoric and Style

On Seeing England For the First Time by Jamaica Kincaid. (2016, Jul 06). Retrieved from https://studymoose.com/on-seeing-england-for-the-first-time-by-jamaica-kincaid-essay 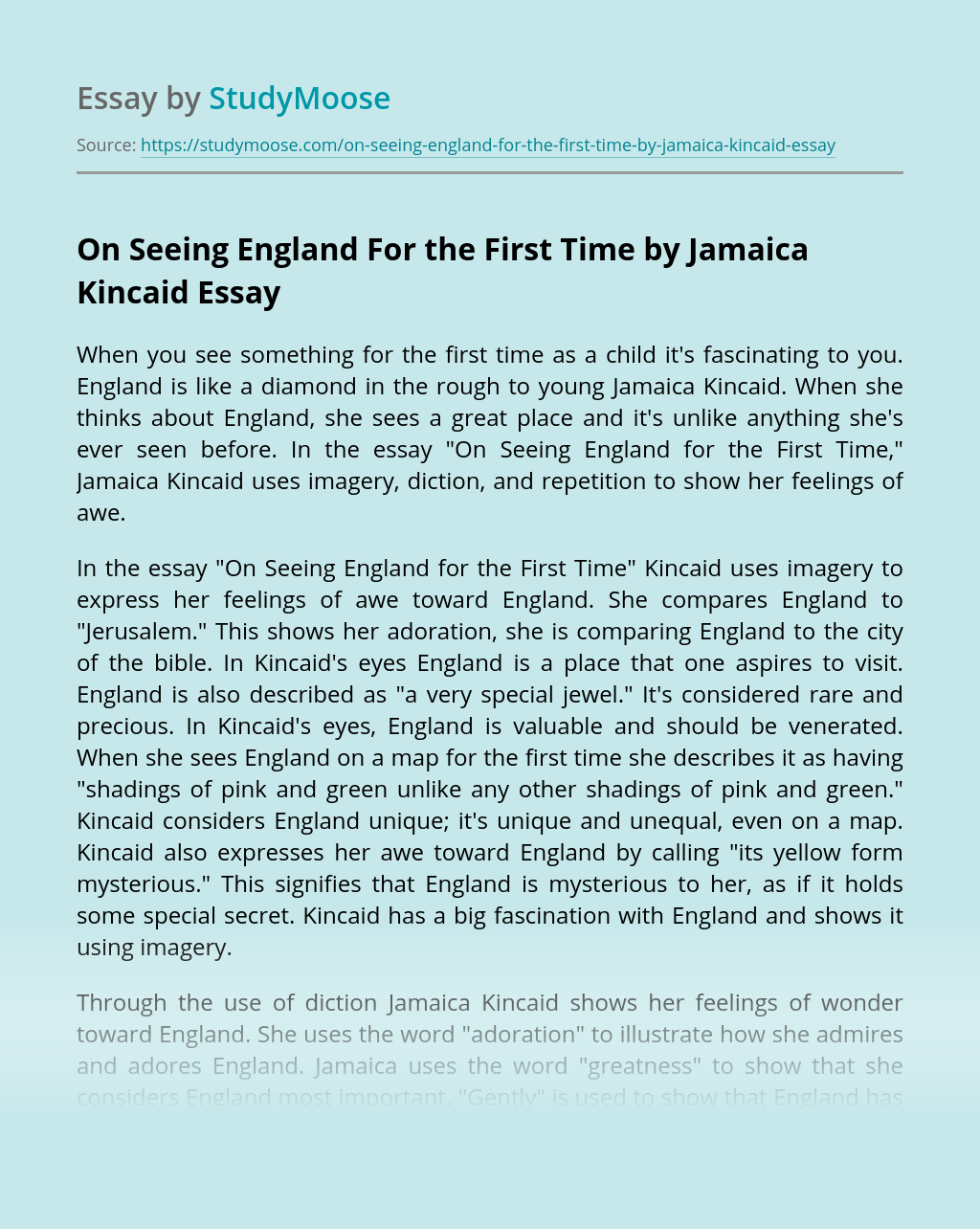