On How Not to Read the Constitution

The question about understanding and interpreting our Constitution has been always topical. The researchers Lauren H. Tribe and Michael C. Dorf published an article discussing the issue when the Constitution should be read strictly or more loosely. They have concluded that this important law book will always be a serious subject for various interpretations.

Both writers mentioned that the Framers did not think about the possible effects of that significant document on the society in general.

Don't use plagiarized sources.
Get Your Custom Essay on On How Not to Read the Constitution Just from $13,9/Page

They called it “wish projection” while the contemporary readers consider this book to be “wish fulfillment.” That fulfillment idea can be asserted in the document to justify personal moral or political viewpoints. However, Dorf and Tribe state that the Constitution remains “empty, and infinitely malleable” for most readers. It means that is significant to identify exact principle which will anchor the Constitution.

Lauren H. Tribe and Michael C. Dorf have a common view on the most obvious problem with the Constitution.

For them, it is the immense amount of space which readers can use to make up new rules. For example, they mention the Preamble and the usage of terms which they call “fluid, but plastic” which convince readers to imagine. The author discusses the usage of the “lively” language which gives more serious support in legal, ideological, or political spectrum than the Preamble could have ever provided. These directions lead to the significant discrepancies in interpreting one and the same document and its practices. This triggers constant debates about the meaning of certain lines in different contexts.

The viewpoint that people have to look beyond the particular beliefs of the Framers to use the norms mentioned in the Constitution to modern problems is not a “liberal” position. In 1976 Supreme Court made the following statement considering this situation. The Framers used general language in the document, and this leaves a challenge for the next generations to understand the original meaning of that language. As the environment is constantly changing, it is not an easy task to do.

The opposite viewpoint is called the conservatives which are convinced that discovering the Constitution is a more difficult process than trying to understand the fixed meaning used at the time of creating that significant document. Those people who wrote the Constitution and those who voted for using it as the normative document for the whole country projected their vision into an indefinite future. Justice Joseph Story said: ”How easily men satisfy themselves that the Constitution is exactly what they wish it to be.” It means that the readers implement the language of that fundamental book as a mirror to use their personal moral and political views in the undefined language.

Since the creation of the Constitution, this document meant to create a connection between the government and the society, the rules and responsibility, group of people and the individual needs. The main objective of this book is to balance the freedom against liberty. However, this document contains lots of lines which could be read from different viewpoints. For example, the Eighth Amendment includes the information about banning the infliction of “cruel and unusual punishment.” However, there are no clear explanations of the means of punishment. The Fourth Article mentions that the US guarantee each state a republican form of government. However, there is no clarification of the definition of the republican government. These examples prove that the Constitution leaves lots of free space for the readers to add within the meaning of various articles and amendments. Another basic problem is that there are lots of terms which can be understood differently. The words like “Justice,” “Blessings of Liberty” are general concepts which are used throughout the whole work.

Here comes the question: How people can rely on the Constitution if it can be interpreted differently when another person reads it? It seems that this document requires lots of revisions and clear explanations which would serve as a rule for the whole country. It is no wonder that each person understands the text with another meaning. However, the most significant law book is that document which should have one and the same meaning within one context.

Should the Constitution be rewritten or should people think of another solution? It is true that this question cannot be answered by ordinary citizens. The higher law institutions of the country must research this issue more thoroughly. The Constitution contains lots of unsolved riddles which each reader interpret from his or her viewpoint. Such a multi-facet approach cannot be used in the most significant law book because the citizens have to use exact rules and know the obligations.

Both Dorf and Tribe summarize, “Inconsistency-even inconsistency with democracy–is hardly earth shattering.” It means that there never will be perfect systems if there is a human factor: in this case, it is the necessity of people to interpret. There will always be different and opposite viewpoints, and people just have to find compromises to prevent possible conflicts.

On How Not to Read the Constitution. (2016, Jun 04). Retrieved from https://studymoose.com/on-how-not-to-read-the-constitution-essay 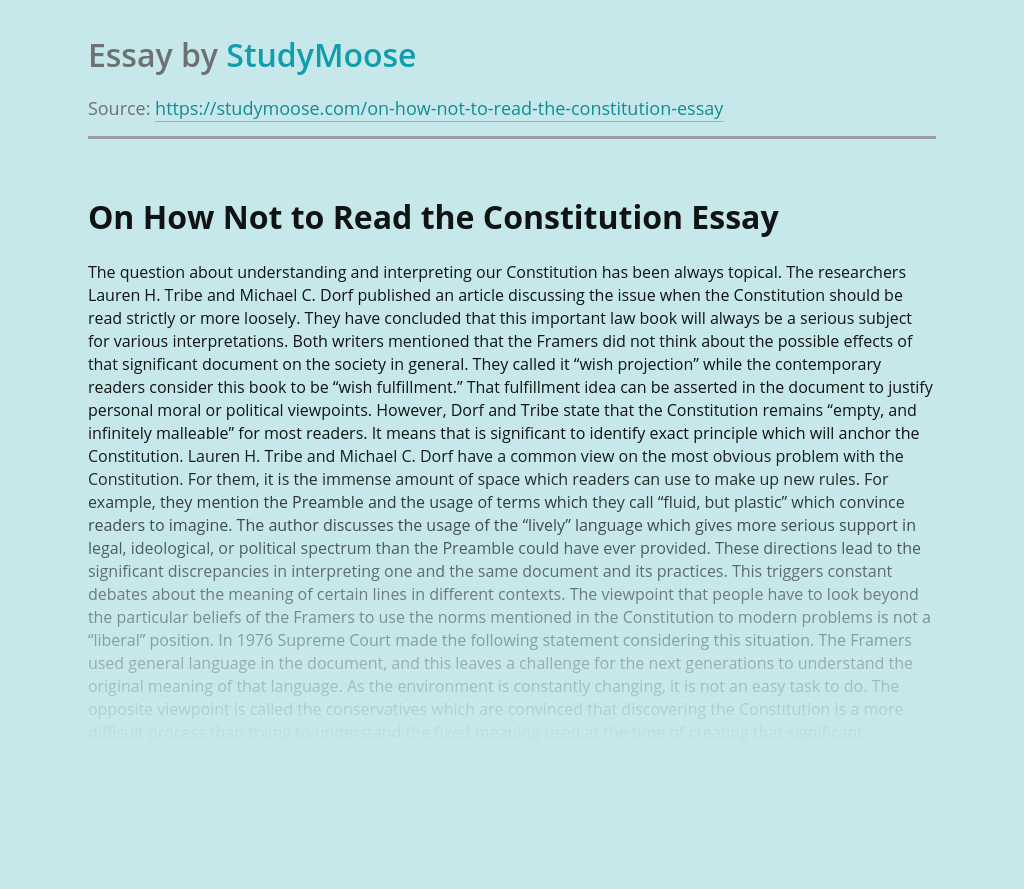 Rate this post The Legislature and the Judiciary: Conflicts The article “The Courts and the legislature in India” by Phiroze K. Don't use plagiarized sources. Get Your Custom Essay on On How Not to Read the Constitution Just from $13,9/Page Get custom paper Irani talks about the conflict between the Judiciary and the Legislature, the...

Rate this post I. Introduction The spirit of equality pervades the provisions of the Constitution of India, as the main aim of the founders of the Constitution was to create an egalitarian society wherein social, economic and political justice prevailed and equality of status and opportunity are made available to all. However, owing to historical...

Rate this post QUESTION 1 Issue: the issue about company’s constitution and whether the loan contract between ABC bank and Sambal Pty Ltd is invalid. State the law: Section 140 of the corporations act states that: “A company’s constitution (if any) and any replaceable rules that apple to the company have effect as a contract:...

Rate this post 1. If no judicial court of authority, namely the United States Supreme Court, has stricken the 1973 War Powers Act and declared it null and void constitutionally, how is it that the authors of the text book are able to conclude Congress has few, if any, war powers remaining? How can this...

Present condition of rule of law in Bangladesh

Rate this post Introduction: One of the basic principles of the English constitution is the rule of law. Don't use plagiarized sources. Get Your Custom Essay on On How Not to Read the Constitution Just from $13,9/Page Get custom paper This doctrine is accepted in the constitution of U. S. A. and also in the...