Offred may be the heroine of her own story but there are many other heroines in the narrative. Discuss three of them and their function in the novel. In ‘The Handmaid’s Tale’ the main theme of the novel is gender and the way power is unequally distributed, this is explored in an extreme circumstance of a theocracy in a time of revolution. There are different methods of heroism demonstrated in the novel such as defiance through thought and action.

Offred is quite a passive woman that one could describe as selfish so you could dispute whether she deserves the title of heroine at all.

Don't use plagiarized sources. Get your custom essay on
“ Offred may be the heroine of her own story but there are many other heroines in the narrative ”
Get custom paper
NEW! smart matching with writer

She herself recognises that she is submissive yet we see random acts of disobedience from her throughout in her thoughts. Offred’s way of rebellion may not be through physical action yet she tries to remember things from the past and continues her own sense of individuality. She hangs on to memory and idealises the past which makes the current regime seem all the more unreasonable yet the recollection helps make the time more bearable for her.

As the narrator Offred is defying the routine and she feels it is her duty to record events and not get emotionally attached she says ‘One detaches oneself. One describes. ‘ This emotional distance enables her to accept that the responsibility of being a handmaid has been unavoidably imposed on her and that she has no other choice so the only thing she can do is record the unreasonable conditions.

Offred feels like her life is a performance and I think that the fact that she can bear to live like that makes her a heroine in her own way.

In an echo of Simone de Beauvoir Offred states that ‘my self is a thing I must now compose, as one composes a speech. What I must present is a made thing, not something born. ‘ Offred took for granted all the freedoms that femenists won and now pays the price even though she still feels apparently uncomfortable towards her mothers activism. We see at the end that she doesn’t tolerate the regime all the way through as she visits Nick on several occasions endangering both of them. You may say that this action is stupid but it is another way of going against routine.

Offred speaks for the disempowered and as we can see from the historical notes she must have escaped as her account was recorded and because of this she has helped the future generations learn of how life was even though she may or may not have taken direct action at the time. Moira is a completely different character to Offred. The contrast between docile Offred and Moira, who is a feisty feminist is outlined continuously by Offred herself. You can tell that she has a great admiration for Moira as she respects the courage it takes for her to voice her opinions and constantly rebel.

All descriptions of Moira emphasize feminism down to her sexual preference she fits the stereotype of the lesbian government defying femenist typical of the 1960’s. In many ways Moira is like Offred’s mother who’s actions we hear about when Offred recollects incidents of burning pornography. You could also suggest that Offred’s mother is a heroine with her defiance of the rules and the fact that she has been sent to the colonies. The colonies is the place which the citizens fear going to most so the fact that she is bearing this makes her seem all the more courageous.

Moira is the only character who directly attemps to escape Gilead, by putting on the Aunt’s clothes she is defying the goverment’s attempts to categorize her and define her identity. It is ironic that in the end Moira escapes and ends up in ‘Jezebels’, the biblical significance of this name connotes as a whore house. You could argue wether Moira is a proper heroine as she chose the easy option, in ‘Jezebels’ all her appetites are fulfilled and so she doesn’t feel the hunger of touch or longing like Offred.

She feels it is a nice compromise and tries to justify her being there to Offred when she says ‘The food’s not bad and theres drink and drugs, if you want it, and we only work nights. ‘ Moiras escape and rebellion had often inspired Offred and so she seems disappointed that the previously spirited individual has in some ways become passive like herself and surrendered to accept a role in society. Top of Form 1 After being a role model for the major part of the novel we see Moira exemplify the way a totalitarian state can crush even the most independent spirit.

Although Ofglen only had a minor role in the novel compared to Offred she proved herself a lot less passive. Ofglen took real risks such as at the salvaging when she ended the revolutionarie’s life to prevent him suffering any more than necessary. As she was part of the resistance herself showed that she was willing to act in trying to change the things she didn’t agree with. Doubling is present throughout the novel when the handmaids had to pair up and act as spies towards one another.

This act of doubling forces Offred to compare her and Ofglen’s functions in society and after discovering Ofglen’s participation in the resistance she has a great deal of admiration for her. At first she believed Ofglen to be a true believer but she also takes into account that is the way she must come across. On their shopping trips and walks we see the conflict and contrasts between the actual situation and what it is hidden behind. They look at a large house and observe that it appears to have it all and be an embodiment of family values but it is just a charade.

The language used to describe the house is all routine and very regulationary and cold ‘The hold of a ship. Hollow. ‘ This also emphasizes Offred’s preoccupation with words. Underneath the apparently perfectly ran household is sexual coercion, enslavement and political expediency as the commander fulfills his sexyal appetite and is involved in the black market, himself defying the system. We see people get off on power, women as well as men only in the way of femenism and resistance.

The pun ‘pen is envy’ is taken from the word penis separated. Women are treacherous to the regime and fighting against the system, it is linked to Offred’s mother who was possibly sent to the colonies due to her femenist views. I think these heroines are important in the novel because they prove that not only the men are capable of demonstrating strength, power and resistance. Although they may not use the same methods they are all equally important and effective because each woman is acting in the way they believe is best at the time.

Offred may be the heroine of her own story but there are many other heroines in the narrative. (2020, Jun 02). Retrieved from http://studymoose.com/offred-may-heroine-story-many-heroines-narrative-new-essay 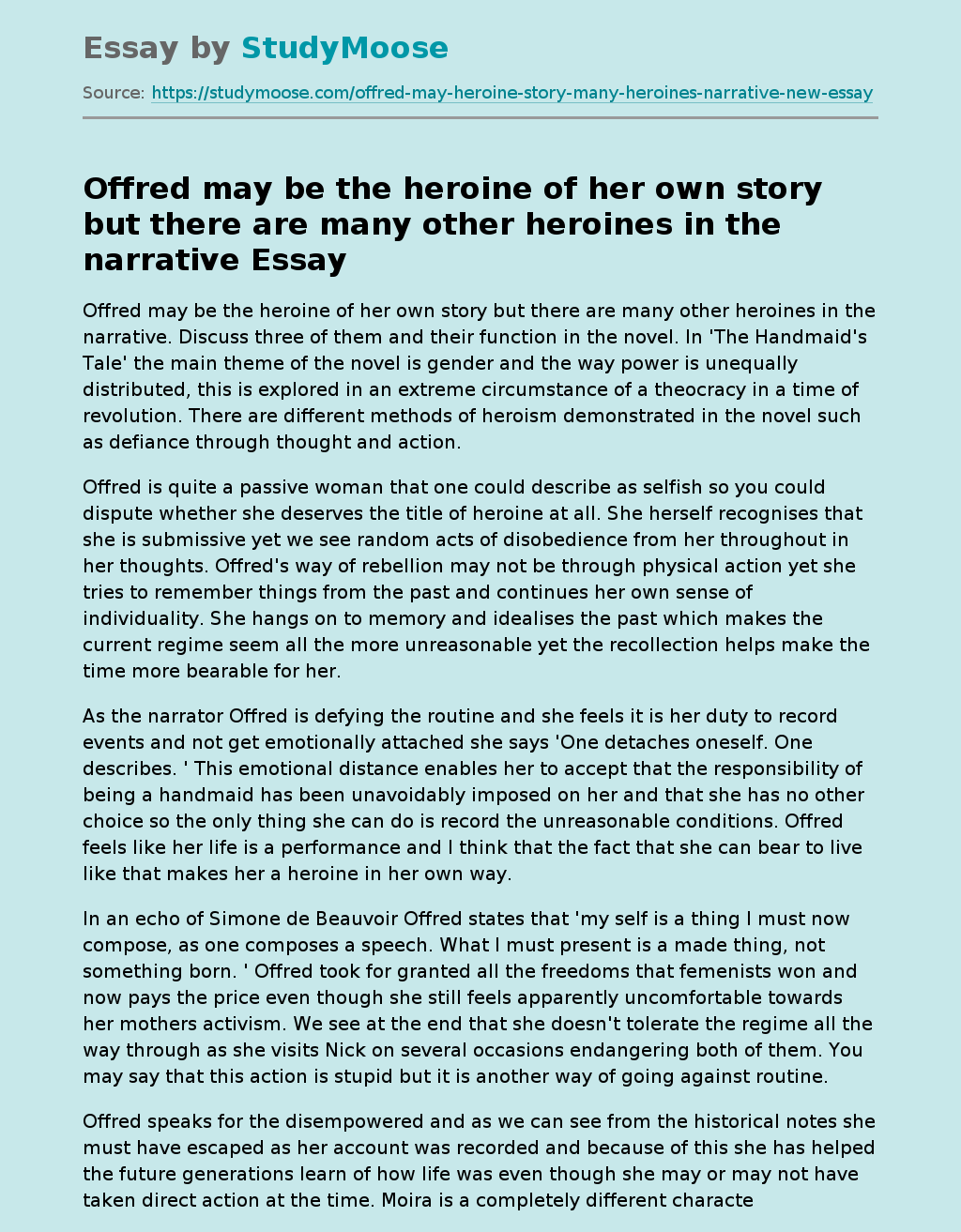