Handmaid's Tale - the character of Offred

Margaret Atwood’s novel The Handmaid’s Tale houses a very authentic range of characters, in a complex world. Set in the Republic of Gilead, a totalitarian and theocratic state, where a reproduction rate is rapidly decreasing, some women are labeled as handmaids and assigned to elite couples that have difficulty conceiving. The personality of one character in particular, however, may seem hasty and misunderstood at first glance. But given the circumstances, she proves to hold the values of humanity: she has her own set of opinions, flaws, and habits; has regrets; and a balance of courage and fear.

Don't use plagiarized sources. Get your custom essay on
“ Handmaid’s Tale – the character of Offred ”
Get custom paper
NEW! smart matching with writer

Furthermore, the setting this character must survive in is not much different from today’s society. The government is deemed corrupt, fear of punishment is instilled, and the leaders ensure that the citizens adhere to the law. Finally, the aid and support that she receives, the faith and hope she has, and the development of friendships she makes also has a likeness to ordinary relationships in our world.

Hence, the novel’s protagonist, Offred is a relatively relatable individual, especially in terms of her character, her surroundings and her supporting roles.

Offred conveys a sense of reality in her personality as she is not perfect and has her own set of opinions, flaws, and habits. For instance, Offred has many moments and flashbacks where she reminisces about her past. This implies that she has regrets and obstacles in her life, just as every human being does. When Offred describes her appearance, albeit briefly, it signifies the insecurities that she keeps bottled up inside “I am thirty-three years old.

I have brown hair. I stand five seven without shoes. I have trouble remembering what I used to look like. I have viable ovaries. I have one more chance” (Atwood, 143).

Had she been proud of what she looked like, she most likely would have gone into more detail, but the lack of words plainly states that she thinks nothing special about herself. At one point that she mentions that she does not like to look at herself in the mirror. This shows that she does not look at her self as superior and she is also self-conscious of her own appearance. She also possesses a certain attributes that any person would possess; she is rebellious and disobedient in constricting situations. This is what makes her more interesting and what sets her apart from the rest.

Although Moira, Offred’s best friend, was an even more revolutionary character, she seemed too daring to be true. A real life person would not be likely to pull off stunts that Moira had accomplished, for example escaping from the Red Centre “She had both hands on the lid when she felt something hard and sharp possible metallic jab into her ribs from behind. Don’t move, said Moira, or I’ll stick it all the way in, I know where, I’ll puncture your lung”, “I couldn’t believe how easy it was to get out of the Center. In that brown outfit I just walked right through.

I kept going as if I knew where I was heading, till I was out of sight” (Atwood, 130, 244). Offred had just enough courage and just enough fear to seem realistic. Keeping these points in mind, it is clear that Offred could have been an ordinary character in our society. The Republic of Gilead, as strange as it may seem, actually has some similarities to the modern day and this is primarily seen by Offred’s response to its laws and regulations that they instill. To her, the government appears as corrupt as most governments in this world, and dictators still thrive, just as they do in Offred‘s society.

Offred responds to this by doing nothing, which would be the decision of most people if forced to live under these conditions. The leaders of Gilead, after all, employ obedient enforcers to make sure that citizens abide by their laws. She mentions this in the book when she retells how the changes in her nation started. She describes in full length that she, along with all women in the U. S. , were forced from their jobs by men in uniform carrying machine guns “Not fired, he said. Let go. You can’t work here anymore, it’s the law” (Atwood, 176).

The fear of punishment is instilled, akin to the terrors of being imprisoned or given a death sentence in our world. Penalties are dreaded so much in Gilead, for most of the time they are unjustly given out and they vary from hanging to ‘Salvaging’; which is being beaten to death “ The three bodies hang there, even with the white sacks over their heads looking curiously stretched, like chickens strung up by the necks in a meat shop window; like births with their wings clipped, like flightless births, wrecked angels” (Atwood, 277). Offred ultimately responds passively, on account of this fear, and because liberal ways are shunned in Gilead.

Margaret Atwood was right in not giving Offred any extraordinary abilities to surpass or overthrow the tyrants that ruled over her life as it would result in a loss of Offred’s relatable self. Relationships with other people are a necessity of life that defines human existence. As Offred progresses with day-to-day life, she develops these friendships, which ensure that she exists. The friends and allies that she made were essential for keeping her sanity intact because without any shoulders to lean on in times of sorrow, a person’s mental capacity could break.

Amongst her friends were Cora, whom Offred was not very close with but did not have any tension with, Ofglen, Moira, her best friend, and Nick, the Commander’s chauffeur that Offred opens up to and confides in towards the closure of the story. Offred frequently finds herself seeking support and knowledge in people who share the same beliefs and opinions as her, most significantly from Ofglen and Moira. This portrays the doubts about her world that she holds: another human quality. From Ofglen, she realizes that she is not alone in thinking that their country is corrupt and that something must be done to change things “At last Ofglen speaks.

“’Do you think God listens,’ she says, ‘to these machines? ’ She is whispering: our habit at the Center”(Atwood, 168). However from Moira, Offred finds out that escaping from their strict nation is not as easy as she had thought, as Moira could not even arrive at such a courageous feat. Without her supporting roles, Offred could have been an ignorant citizen in Gilead that was brainwashed into believing every word that the government fed them. If that were the case, Offred’s connection to the readers would have been lost. Furthermore, Offred turns to hope and faith to console her and help her to move on with life.

Just as her friends helped her, these virtues aided in protecting her wellbeing; though forced, since she had nothing else to look to. The hope that Offred’s husband is still alive is very similar to the feelings of families in modern day society that pray for the safe return of their lost, loved one from war or other degrees of separation. Faith is introduced to Offred when she acknowledges the pillow in her room with the word ‘faith’ printed on it “There’s a hard cushion on it, with a petit point cover: FAITH, in square print surrounded by a wealth of lilies” (Atwood, 57).

The fact that it is something she can read implies that there is still hope, as not everything has been taken away from her. This knowledge strengthens her belief that change will come, though subconsciously since Offred never mentions it. The faith that she puts into the Commander also ties into the trust she gives him when playing games, reading magazines and when he brings her to Jezebel’s “He wanted me to play Scrabble with him”, “He sits me down, and sits himself down beside me. He puts an arm around my shoulder” (Atwood, 144, 236). Trust is a very common issue that people have trouble giving out.

But in examining these elements it is clear Offred’s confidantes have impacted her life and how they make her into a real character. The Handmaid’s Tale is appealing due to its main character, Offred, who shows a great deal of realism in a world of impossibilities. Her character itself is strong-willed, but moderate, and is the perfect mix of what it is to be human. Through her, many of the readers can see a bit of themselves in Offred. She is an excellent example of how a regular person would behave if they were thrust into the world of The Handmaid’s Tale.

Handmaid's Tale - the character of Offred. (2017, Nov 11). Retrieved from http://studymoose.com/handmaids-tale-the-character-of-offred-essay 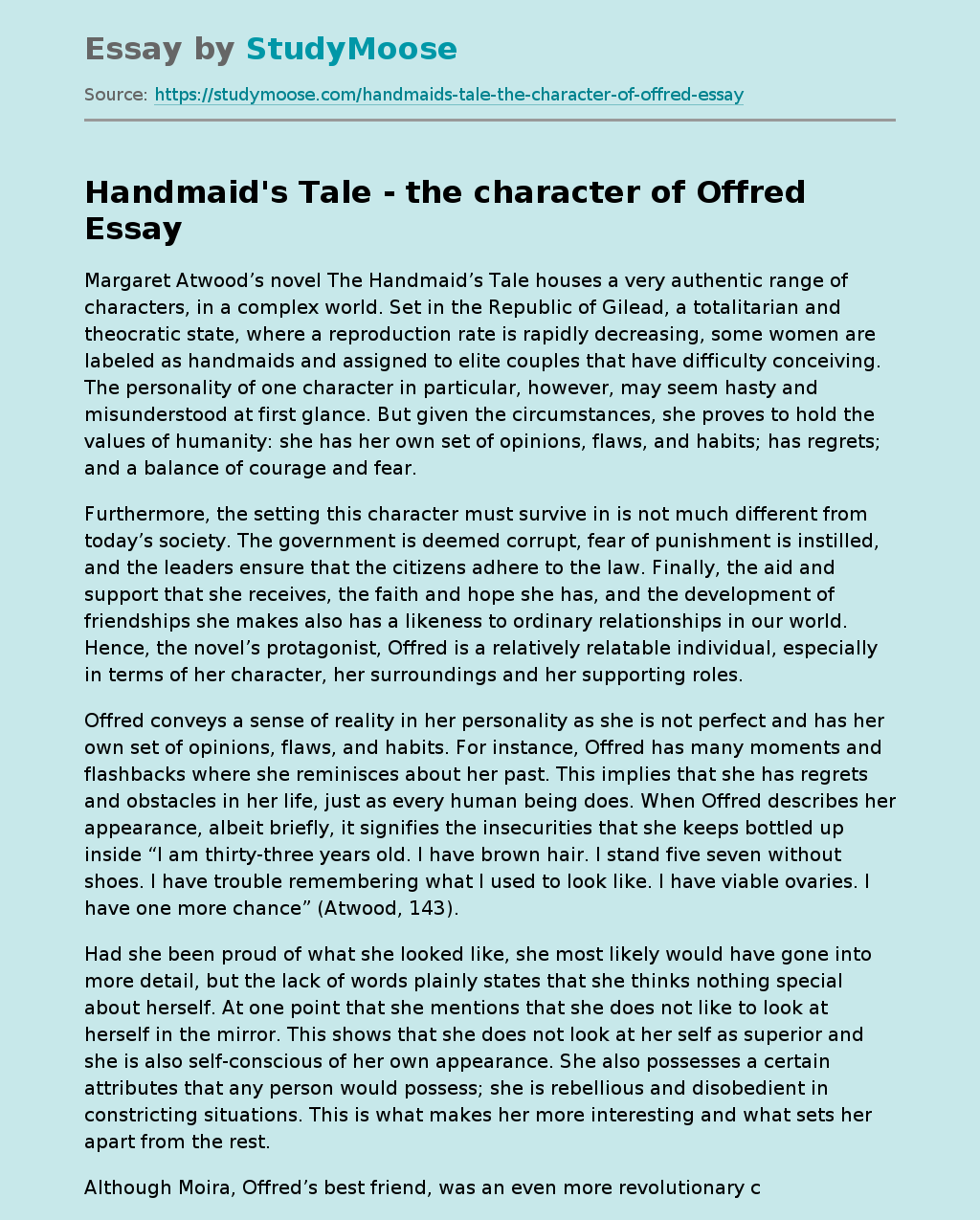