The novel The Handmaid’s Tale written by Margret Atwood is about how the government chose to control the way the community was run and control the lives of men and women. The novel tells the story from the perspective of a middle-aged woman named Offred who questions society’s accepted beliefs and conventions. Offred is a handmaid in the Republic of Gilead who is constantly questioning the government beliefs and rules. Her character pushes the limits set out by the government.

Don't use plagiarized sources. Get your custom essay on
“ The Handmaid’s Tale ”
Get custom paper
NEW! smart matching with writer

Being a handmaid Offred is not allowed into the sitting room.

One night she wanders down to the sitting room to try something new, she is there to be independent; she likes to be on her own. “I like this. I am doing something, on my own. The active Tense. Tensed. What I would like to steal is a knife from the kitchen, but I’m not ready for that” (Atwood 92). At this point Nick interrupts her.

Nick and Offred are not allowed to associate with each other. “I freeze, white was a mistake. I’m snow in moonlight, even in the dark” (Atwood 92). She breaks laws, knows what she is doing to be wrong but her need to test the laws convinces her to proceed.

Secondly, the novel indicates that Offred breaks many laws by spending time alone with the commanders and her presence in the sitting room with Nick. Offred visits with the commander and plays scrabble with him. “‘I’d like you to play a game of Scrabble with me. ‘ he says” (Atwood 130). In playing scrabble she breaks the law against handmaids spending independent time with commanders without the supervision of the wife. One night she heads down into the sitting room to do something rebellious. She has the thought of stealing. “In the wood at midnight, magic flower.

A withered daffodil… with daffodils will soon be thrown out” (Atwood 92). Shortly after Nick interrupts her. He puts his hand on my arm, pulls me against him, his mouth on mine, what else comes from such denial? Without a word. Both of us shaking, how I’d like to. In Serena’s parlour, with the direct flowers on the Chinese carpet, his thin body… My hand goes down… I could unbutton, and then. But its too dangerous (Atwood 92) Although she is cautious about her choices she still breaks the laws, she knows what she is doing and she still continues.

Finally, while ignoring the laws, Offred gains many things including the need for and the suffering, excitement, laughter and love of a strong friendship. After her interaction with Nick she becomes confused and anxious “You can wet the rim of a glass. This is what I feel like: this sound of glass. I feel like the word shatter. I want to be with someone” (Atwood 97). She is afraid. She does not know what to think about this passion she is having. But this is wrong; nobody dies from lack of sex. It’s lack of love we die from. There is nobody her I can love, all the people I could love are dead or elsewhere.

Who knows where they are or what their names are now? They might as well be nowhere, as I am for them. (Atwood 97) The friendship she gains with the commander affects her in powerful ways, she begins to feel differently about herself. “I am thirty-three years old. I have brown hair. I stand five seven without shoes. I have trouble remembering what I used to look like. I have viable ovaries. I have one more chance… Circumstances have altered” (Atwood 135). It is shown that her actions cause her confusion and she is in a state where she had begun to have hope.

In conclusion, the author Margret Atwood follows the pattern of fictional novels with The Handmaid’s Tale by having the main character, Offred, constantly questioning the social beliefs and conventions in the Republic of Gilead. Offred’s want for a better life is illustrated through her challenges against the social standards, her methods of testing them and the final outcome of her defiance. Sarah Driscoll January 17, 2005 Show preview only The above preview is unformatted text This student written piece of work is one of many that can be found in our GCSE Margaret Atwood section. 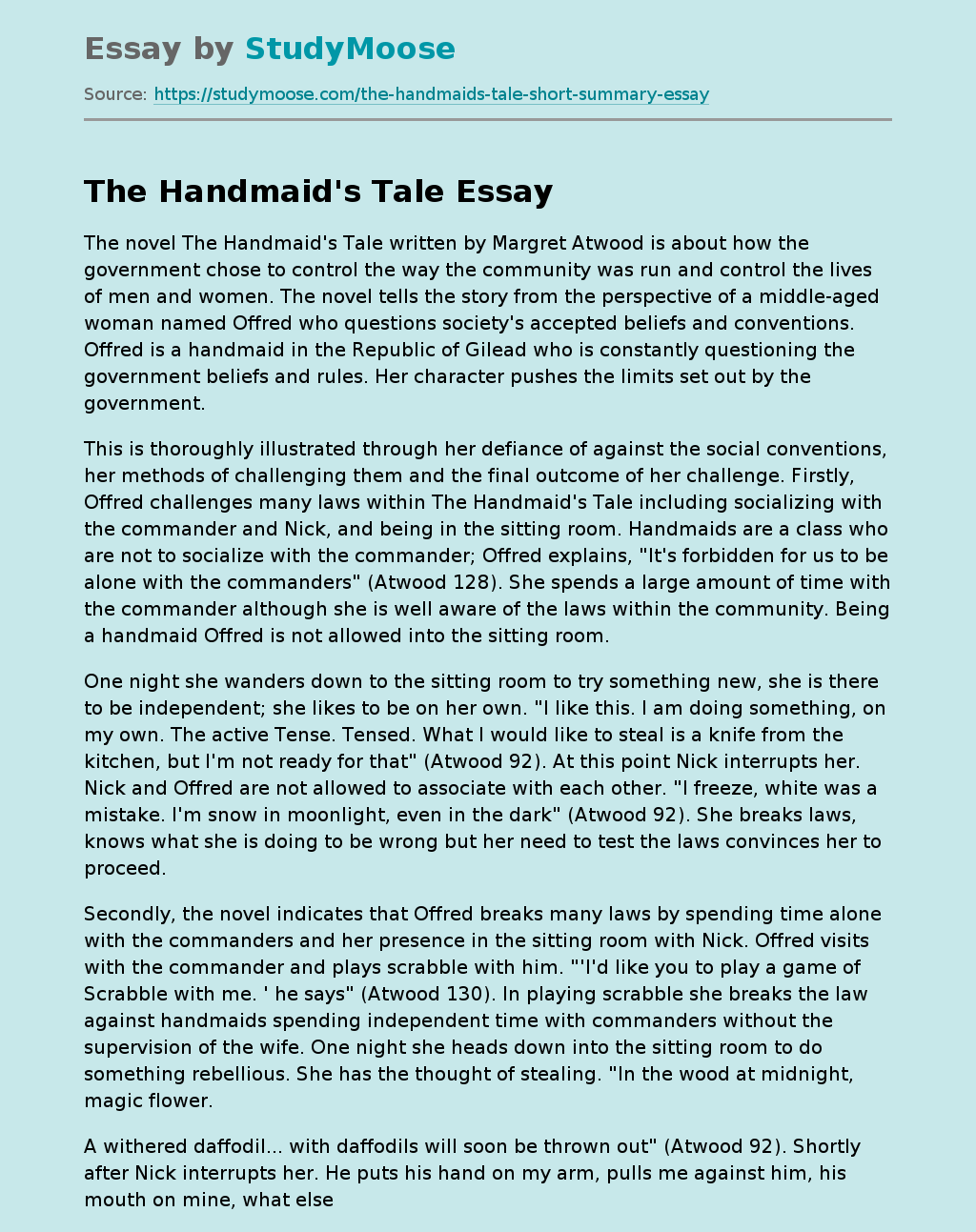