People are always required to know the proper etiquette whether they are at home, in school, in public places, or in the office. Working with other people in an organization or company requires necessary conduct or behavior so that people can work in a friendly environment and be able to work well. Office etiquette or office manner is very essential so that a workplace will be organized, disciplined, conducive for work, and comfortable for the employees. Respecting others and being well-mannered in the office make a harmonious relationship between people in the workplace.

Don't use plagiarized sources. Get your custom essay on
“ Office Etiquette ”
Get custom paper
NEW! smart matching with writer

It is important to build trust and respect among people in the office since most workers spend most of their time at work or in the office (Menon, 2008). This paper will provide guidelines and what to do and what not in a workplace in order to attain a pleasant environment office. Cell Phone Etiquette Cellular phones are regarded as a necessity nowadays. It is very handy but can also create disturbance in people especially at work when everybody’s quiet and busy working.

It is important to be discreet when inside the workplace; there are people who do not have any consideration at all when it comes to using their mobile phones.

One should be aware on the proper use of cellular phones at workplace. It is important to turn the ringer off or turn it to silent or vibrate mode so that when somebody calls or sends a text message, the other people in the workplace will not be disturbed with the loud ring or sound of the phone.

Moreover, sounds or ringing tone from the phone can be annoying for some people. Another point to remember is to use the cell phone only during emergencies or important calls, such as when there is a family emergency and any other situation that is really serious and urgent.

It is a rule also not to bring cellular phones during meetings as it can disturb not only the people in the meeting but also the owner of the cellular phone. When someone calls or sends messages to his or her cell phone, this could shift the owner’s attention from the meeting to the call or text message (About. com, 2008). Email Etiquette In emailing clients, business partners, and co-workers, one should take into account the proper and ethical way of sending messages and letters through email. Emails should be written in a form of letter. They should not appear as a simple note or text message that people send to their friends or family.

It is important to be courteous and formal in writing an email. The sender should also check the grammar and spelling of the letter as it can give a very bad impression on the sender if he or she does not know such simple things (Montandon, 2008). Emailing jokes and non-work related mails is not also ethical and can make a very bad impression to a person. Sending these kinds of emails can also make other people in the office feel that this person is not working pretty well because he or she has the time to send and forward emails that is not relevant to work (Reid, 2008).

Clothes and Appearance A lot of offices require their workers to wear business attire clothes or casual wear when coming to work. Dress codes are usually different and depend on the company’s regulation. Nevertheless, no matter what the dress code is, one should be aware of the proper clothes to wear when going to work. It is important to always make an effort to appear clean and tidy at work. One should be neat in whatever style of dress or clothes he or she wears. Clothes do reflect a person’s personality as well, so it is essential for people to always look neat and good (“Office Etiquette,” 2008).

For women, it is necessary to wear decent clothes and to avoid too short skirts or daring dresses that expose their cleavage as they may cause distraction or problems such as harassment in the workplace. It is also advisable for women to wear not too much make up that make them look like they are going to attend some party. On the other hand, men should wear something that is presentable and neat such as polo shirts, slacks, and neck tie. They should make sure that their clothes are neatly pressed (Reid, 2008). Grooming Good grooming and hygiene are also very important.

It makes a person look professional when he or she looks neat and smells fresh when coming to work. Thus, taking a bath everyday before coming to work is imperative for everybody. Employees should also practice personal hygiene such as ensuring that their nails and hair are clean and well groomed. They should also wash hands frequently, take care of body odor and bad breath, and cover their mouths before yawning, coughing, and sneezing. One should be very careful also in using perfumes and colognes since some people may not like the scent of a particular perfume and it can cause allergic reaction to some people as well (Menon, 2008).

Physical and Verbal behavior Individuals should take into consideration every act that they do and words that they say. The way somebody talks and behaves represents their personality and character, so it is important for employees to be very careful with their actions and the things that they say inside the office. They should always try to be courteous not only with the bosses but as well as with the co-workers. They should also use language that is appropriate and not too causal when talking to somebody.

They should avoid making jokes and comments that may not be likable to somebody and can offend them. It is very important to think first before saying and doing something (“Office Etiquette,” 2008). Gossiping Gossiping is common among people especially people in the workplace during lunch or break times. If a co-worker starts to gossip around, it is advised to refuse courteously into the person who wants to gossip. It is very important to just “mind your own business. ” People should know that the personal life of individuals in the workplace should be respected (Reid, 2008).

Elevator Courtesy A lot of workers in a building would be either in a hurry as they are running late to work or in a hurry to leave the office. Because of this, elevators can be always crowded. That is why courteousness is very important for people who use the elevator. One common rule in this is to not push people inside. There are some people who are in a hurry that they will thrust their limb into the elevator door and will squeeze their body to get in, so that they will be able to make it on time to work (Menon, 2008). Relationships It is possible to have workplace romance in the office.

Therefore, people who are in a romantic relationship should be professional enough to know what to do and not in the office. There should be no favoritism, personal chats, fights, and even sexual acts inside the office. They should be courteous enough to know their limitations and be able to work professionally while working (Reid, 2008). Greeting/Common Courtesy It is essential for the workers to greet people in the workplace such as saying “hi,” “hello,” or “good morning” whenever they see their co-workers in the hallway, restroom, or wherever (Montandon, 2008).

It is expected that some people will have a hard time to get along with others, and there are some people who may be annoying for somebody. Nevertheless, it is still important for them to greet each other since they are just working in one office. They should always make an effort to smile and be cheerful, thoughtful, and cooperative with everybody at work (Scheneider, 2006). Work Space An office worker should have his own corner, table, or desk to work with. It is very important for employees to maintain cleanliness and orderliness in the said area.

Like physical appearance, the environment also reflects the personality of a person. Having a clean environment or surroundings makes the place conducive to work at. One should always try to keep his or her space or working stations orderly and organized. It is advisable to have all the files and papers be placed in a box or folders so that it will not be scattered all over the table. Simple cleaning is necessary and important for employees to do in their own work stations.

After all, they are not required to clean the whole office area since there is somebody assigned to do that job, which is the job of a janitor (“Office Etiquette,” 2008). Security There will be important papers, files, and documents in a workplace, and it is important to always keep them private and confidential. It is important not to leave these documents and papers in the table. These files should be kept in some safe place where nobody can see and take a look at them. People at work should also respect their co-workers belongings. They should not to touch or get something from their co-employee’s belongings without asking permission.

This is a sign of respect for other people’s things; if somebody wants his or her possessions to be respected, then he or she should also do the same thing to other people (Menon, 2008). Habits People have their own habits that sometimes are very hard to stop. Some habits could be annoying for people such as tapping a pencil on the table, singing loudly, and tapping one’s foot on the floor, burping, chatting, interrupting somebody when talking and others which create disturbing sounds that can annoy and bother people in the workplace.

Hence, employees should be mindful of their habits, and they should be sensitive enough to know whether they are affecting other people already with their personal habits (Menon, 2008). Manners/ Behavior Proper behavior is needed in any place, most especially in the office. People should learn how to respect each other in the workplace and should always be polite. They should say please when asking a favor, and they should always say “thank you” and “you are welcome” when necessary. One act of respect also in the workplace is respecting the time.

One should always be punctual when coming to work or to a meeting. When running late, they should always give an advance notice. Still, it will be much better not to be late at all. Another factor under manner and behavior is learning how to apologize and admit mistakes. One should say “sorry” if he or she knows that he or she did something that is not right. An individual should be humble enough to do this; it shows that a person has great sense of respect for other people in the workplace. Blaming is never an option; people should not blame other people when something went wrong at work (Schneider, 2006). 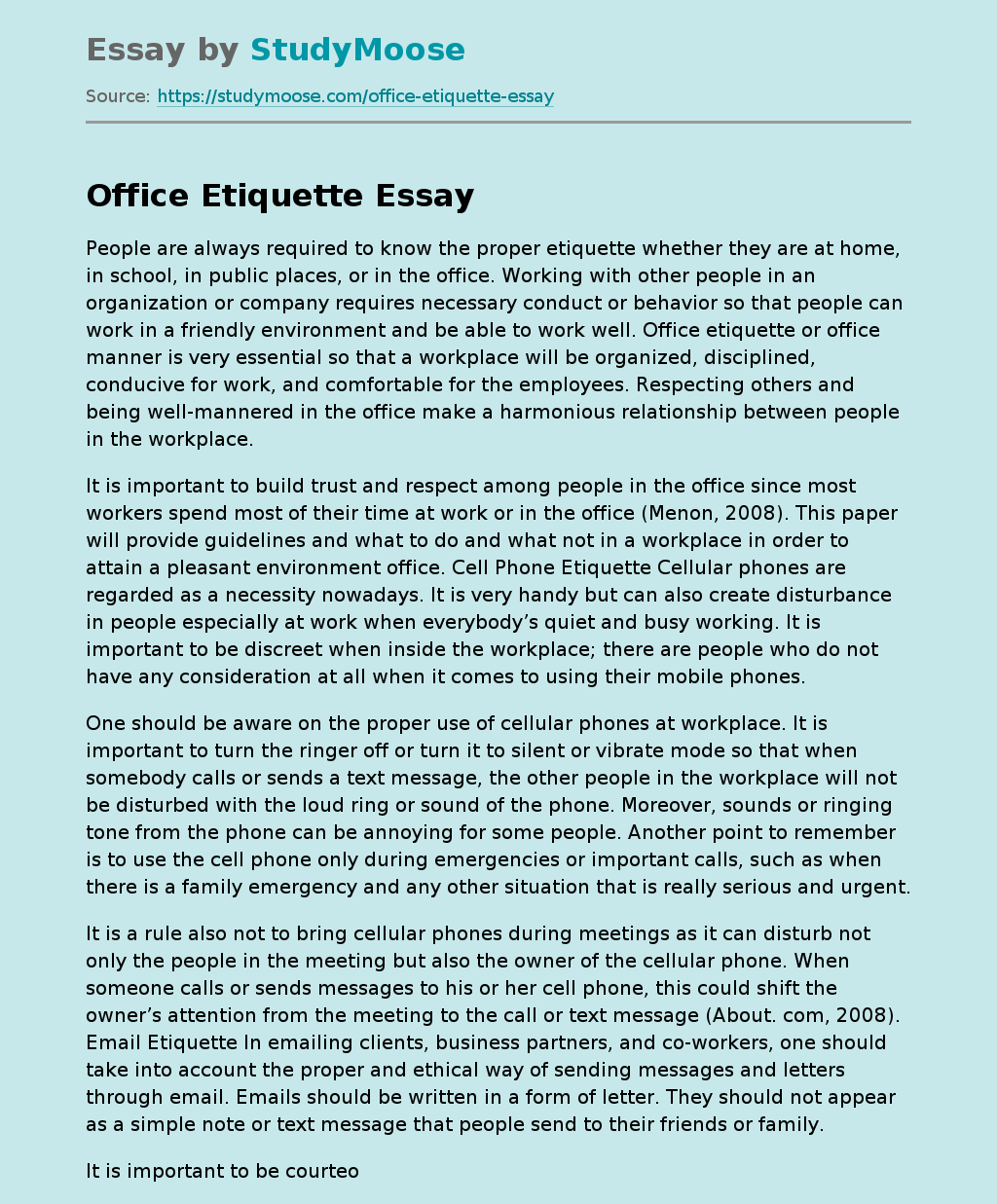