Of Truth by Francis Bacon and A Short Analysis

What is truth? said jesting Pilate, and would not stay for an answer. Certainly there be, that delight in giddiness, and count it a bondage to fix a belief; affecting1 free-will in thinking, as well as in acting. And though the sects of philosophers of that kind2 be gone, yet there remain certain discoursing3 wits, which are of the same veins, though there be not so much blood in them, as was in those of the ancients. But it is not only the difficulty and labor, which men take in finding out of truth, nor again, that when it is found, it imposeth upon4 men’s thoughts, that doth bring lies in favor; but a natural though corrupt love, of the lie itself.

Turn in your highest-quality paper
Get a qualified writer to help you with
“ Of Truth by Francis Bacon and A Short Analysis ”
Get high-quality paper
NEW! AI matching with writers

One of the later school5 of the Grecians, examineth the matter, and is at a stand, to think what should be in it, that men should love lies; where neither they make for pleasure, as with poets, nor for advantage, as with the merchant; but for the lie’s sake.

But I cannot tell; this same truth, is a naked, and open day-light, that doth not show the masks, and mummeries, and triumphs, of the world, half so stately and daintily as candle-lights. Truth may perhaps come to the price of a pearl, that showeth best by day; but it will not rise to the price of a diamond, or carbuncle, that showeth best in varied lights. A mixture of a lie doth ever add pleasure. Doth any man doubt, that if there were taken out of men’s minds, vain opinions, flattering hopes, false valuations, imaginations as one would, and the like, but it would leave the minds, of a number of men, poor shrunken things, full of melancholy and indisposition, and unpleasing to themselves?

One of the fathers, in great severity, called poesy vinum doemonum, because it filleth the imagination; and yet, it is but with the shadow of a lie.

First he breathed light, upon the face of the matter or chaos; then he breathed light, into the face of man; and still he breatheth and inspireth light, into the face of his chosen. The poet6, that beautified the sect7, that was otherwise inferior to the rest, saith yet excellently well: It is a pleasure, to stand upon the shore, and to see ships tossed upon the sea; a pleasure, to stand in the window of a castle, and to see a battle, and the adventures thereof below: but no pleasure is comparable to the standing upon the vantage ground of truth (a hill not to be commanded, and where the air is always clear and serene), and to see the errors, and wanderings, and mists, and tempests, in the vale below; so always that this prospect be with pity, and not with swelling, or pride. Certainly, it is heaven upon earth, to have a man’s mind move in charity, rest in providence, and turn upon the poles of truth.

To pass from theological, and philosophical truth, to the truth of civil business; it will be acknowledged, even by those that practise it not, that clear, and round dealing, is the honor of man’s nature; and that mixture of falsehoods, is like alloy in coin of gold and silver, which may make the metal work the better, but it embaseth it. For these winding, and crooked courses, are the goings of the serpent; which goeth basely upon the belly, and not upon the feet. There is no vice, that doth so cover a man with shame, as to be found false and perfidious.

And therefore Montaigne saith prettily, when he inquired the reason, why the word of the lie should be such a disgrace, and such an odious charge? Saith he, If it be well weighed, to say that a man lieth, is as much to say, as that he is brave towards God, and a coward towards men. For a lie faces God, and shrinks from man. Surely the wickedness of falsehood, and breach of faith, cannot possibly be so highly expressed, as in that it shall be the last peal, to call the judgments of God upon the generations of men; it being foretold, that when Christ cometh, he shall not find faith upon the earth.

As a pragmatic and as an empirical thinker Bacon subscribed to the fundamental Renaissance ideals—Sepantia (search for knowledge) and Eloquentia (the art of rhetoric). Here in the essay Of Truth he supplements his search for truth by going back to the theories of the classical thinkers and also by taking out analogies from everyday life. It is to be noted here that his explication of the theme is impassioned and he succeeds in providing almost neutral judgements on the matter. Again, it is seen that Bacon’s last essays, though written in the same aphoristic manner, stylistically are different in that he supplied more analogies and examples to support or explain his arguments. As this essay belongs to the latter group, we find ample analogies and examples. Bacon, while explaining the reasons as to why people evade truth, talks of the Greek philosophical school of sceptics, set up by Pyrro. Those philosophers would question the validity of truth and constantly change their opinions.

Bacon says that now people are like those philosophers with the important difference that they lack their force and tenacity of argument. He says that like him the Greek philosopher Lucian was equally puzzled at the fact that people are more attracted to lies and are averse to truth. Bacon is surprised by the fact that people are loathed to find out or even acknowledge truth in life. It seems to him that this is an innate human tendency to do so. He finds evidence in support of his arguments in the behaviour of the ancient Greek sceptics who used to question the validity of truth and would have no fixed beliefs. Bacon thinks that people behave like those philosophers. But he understands that they lack their strength of arguments. He then finds the Greek philosopher Lucian, while considering the matter, was equally baffled.

Lucian investigated and found that poets like lies because those provides pleasure, and that businessmen have to tell lies for making profit. But he could not come to a definite conclusion as to why people should love lies. Bacon says that men love falsehood because truth is like the bright light of the day and would show up pomp and splendour of human life for what they are. They look attractive and colourful in the dim light of lies. Men prefer to cherish illusions, which make life more interesting. Bacon here gives an interesting analogy of truth and falsehood. He says that the value of truth is like that of a pearl, which shines best in the day-light, while a lie is like a diamond or carbuncle, which shines best producing varied rays in dim light of candles. He comes to the conclusion that people love falsehood because it produces imaginary pleasure about life.

Bacon also examines the statement of one of the early Church authorities, which severely condemned poetry as the wine of the devils. Bacon here shows that even the highest art of man—poetry, is composed of lies. He seems to have compounded the two statements made by two early Christian thinkers. He agrees with St Augustine who criticized poetry as “the wine of error”, and with Hironymous, who condemned poetry as “the food of demons”. The equation is that, since the devil or Satan works by falsehood, lies are its food. Poetry tends to be Satanic because it resorts to falsehood while producing artistic pleasure. Bacon, however, makes a distinction here between poetic untruth and fascination with falsehood in everyday life. He thinks that poetic untruth is not harmful, as it does not leave lasting impressions on the mind and character of a person.

On the other hand, the lies, which are embedded in the mind and control and regulate every thought and action of a person, are harmful. Bacon refers to the Epicurean doctrine of pleasure, beautifully expressed by the famous poet of that school, Lucretius, who considered the realization of truth to be the highest pleasure of life. Bacon says that the value of truth is understood by those who have experienced it. The inquiry, knowledge and the belief of truth are the highest achievements that human beings can pursue. He amplifies the matter by giving an analogy from the Bible. According to him, God created the light of the senses first so that men could see the world around them. The last thing he created, according to him, was the light of reason, that is, the rational faculty. Bacon here interestingly comments that, since he finished the work of Creation, God has been diffusing the light of His spirit in mankind.

He supports his argument by referring to the Epicurean theory of pleasure beautifully expressed by Lucretius who held that there is no greater pleasure than that given by the realization of truth. The summit of truth cannot be conquered and there is tranquillity on this peak from which one can survey the errors and follies of men as they go through their trials; but this survey should not fill the watcher with pity and not with pride. The essence of heavenly life on this earth lies in the constant love of charity, an unshakable trust in God, and steady allegiance to truth. At the concluding section of the essay Bacon explains the value of truth in civil affairs of life.

He is conscious of the fact that civil life goes on with both truth and falsehood. He feels that the mixture of falsehood with truth may sometimes turn out to be profitable. But it shows the inferiority of the man who entertains it. This is, he says, like the composition of an alloy, which is stronger but inferior in purity. He then compares this kind of way of life to that of a serpent, which is a symbol of Satan itself. Bacon finds a striking similarity between the crooked and mean devices adopted by people and the zigzag movements of a serpent. To clarify his point more clearly, Bacon quotes Montaigne who said that a man, who tells lies, is afraid of his fellow men but is unafraid of God who is all perceiving. Bacon concludes his arguments by saying that falsehood is the height of wickedness, and such that it will invite the wrath of God on Doomsday.

Of Truth by Francis Bacon and A Short Analysis. (2016, Nov 08). Retrieved from http://studymoose.com/of-truth-by-francis-bacon-and-a-short-analysis-essay 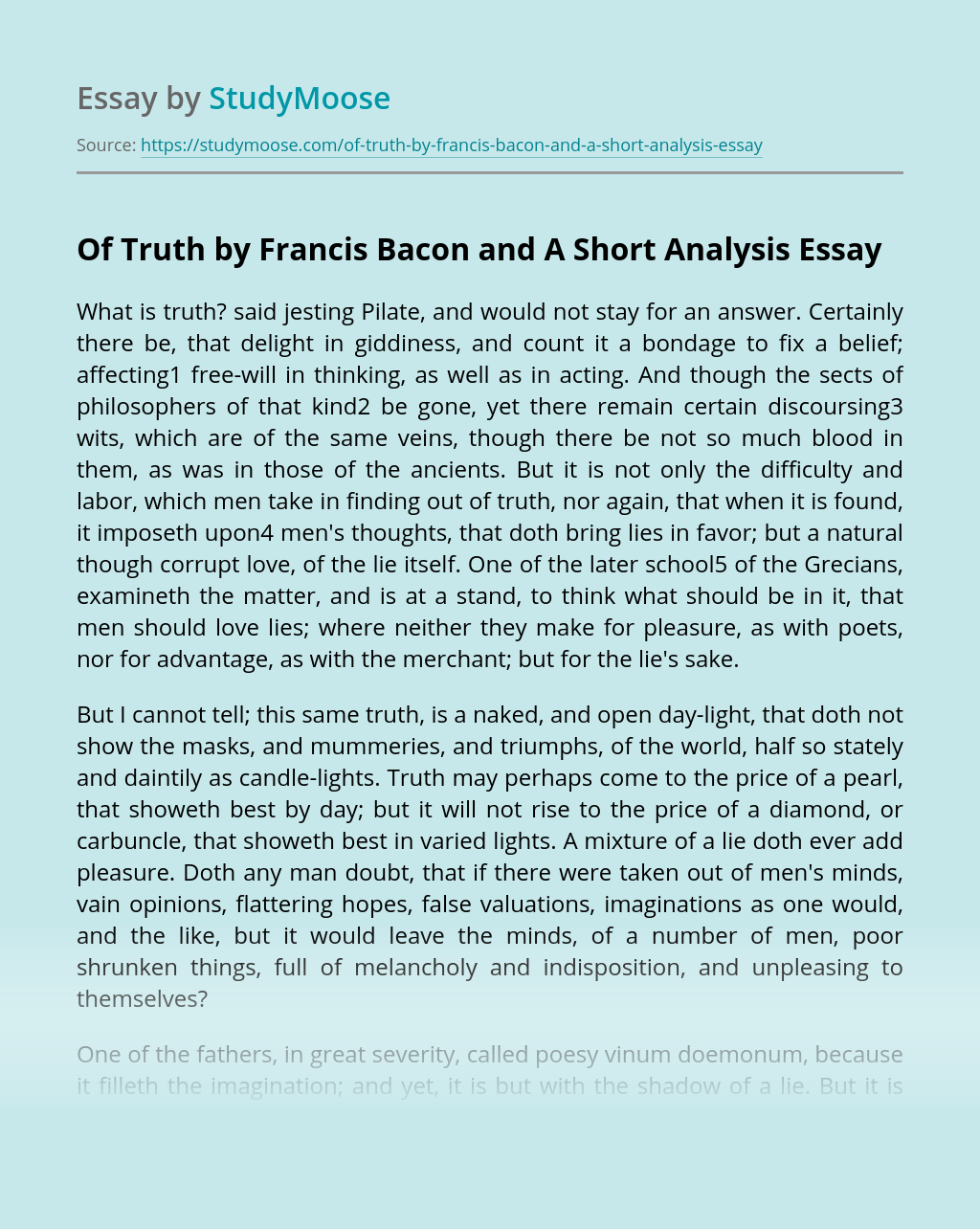 Turn in your highest-quality paper
Get a qualified writer to help you with
“ Of Truth by Francis Bacon and A Short Analysis ”
Get high-quality paper
Helping students since 2015
Stay Safe, Stay Original