Modernism has its origins in the late 19th and early 20th centuries and it is characterized by a break with traditional styles of norms and rules. Modernism experiments with literary form and expression, and it is driven by a desire to overturn traditional modes of representation, and express new topics and sensibilities of their time. In the short story, “The Short Happy Life of Francis Macomber” we hear about man versus nature, and we are being presented to the literary techniques of the modern era – for example the iceberg method.

Don't use plagiarized sources. Get your custom essay on
“ The Short, Happy Life of Francis Macomber ”
Get custom paper
NEW! smart matching with writer

Francis is a very wealthy man that has chosen to go to Africa for hunting to become more of a man.

He is a very tall, well built person with his hair cropped like an oarsman, thin-lipped; overall a handsome man. He is a fine gentleman from England, who has been married to Margaret for eleven years. Their marriage is not very well functioning and they go through a lot of arguments and disagreements, throughout the story. There is a very critical point where Francis wakes up in the middle of the night, and realizes his wife is not sleeping next to him.

He lies awake for two hours until she finally returns. “Where have you been?” Macomber asked in the darkness” ….“I just went out to get a breath of fresh air.” … That’s a new name for it. You are a bitch.” “Well, you’re a coward.” (page 13, line 25,28, 33 and 34). When Margaret returns, Francis is well aware of where she has been. He is mad at her, and he wants her to stop cheating and be a better wife.

Margaret is a beautiful and well-kept woman, who had a few years before been a well-paid model. Her good looks have faded a bit, and she is no longer capable of leaving Francis and get a richer and manlier husband. She does not thrive in the marriage, which makes her seek the excitement, acceptance and the confirmation of her beauty somewhere else, in this case with Wilson. Francis Macomber is a rich gentleman from England. He is very well built and he is a handsome 35 years old man. He is good at court games which are a symbol of him living by the rules and adapting to society. In the story he is dressed in the same sort of safari clothes that Wilson wears except that his is new. This tells us that he want to find the man inside himself. He wants to prove a point to his wife, himself and society, that he is a brave and true man, by coming to Africa in his safari outfit and shoot some game. The fact that his clothes are all new shows a big inexperience.

He is this very fine, rich man who wants to be in touch with his wild side, and wants to show courage and skill, but his clothes and actions in the wilderness makes him look like an inexperienced fool. On the other hand there is the handsome hunter Robert Wilson. He is the complete opposite of Macomber. He is the exciting and brave professional hunter, who is in touch with his wild and manly side. He is not as well-groomed as Macomber. He has a stubby mustache and sandy hair. A very red face, which means he is outside a lot. He lives in the wild and therefore he has got a suntan. His eyes are a cold blue which symbolizes that he has a cold inner. He is a lone wolf, who does not let anybody in, and he is almost portrayed as the animal compared to Francis, who is the controlled gentleman. Besides his untidy outer, is Wilsons character filled with mystique and the courage of a true African hunter.

In contrast to Francis Macomber, Wilson is not afraid to break the law and make his own rules. For example when he chooses to whip the staff, if they do not act properly and follow his orders. Even though it is illegal, and that they should be fined instead. He lives in his own world in the wild, cut off from civilization. He is a man of nature, which is what Francis travels to Africa to become. Francis undergoes a change of his character throughout the story. He arrives in Africa, thinking that he is going to own everything and kill every animal in his way. When he gets there he realizes that it is not that simple. He is a civilized person who is not adapted to nature, and he is not capable of handling situations like hunting a lion. When he fails the shooting of the lion he becomes very ashamed, and he feels humiliated. Francis makes sure that Wilson is not going to tell about the mistake to anyone, because it would ruin the image he is trying to create.

His wife, Margaret, does not want to talk to him, and on the way home from the lion hunt, she “…had reached forward and put her hand on Wilson’s shoulder. He turned and she had leaned forward over the low seat and kissed him on the mouth” (page 12, line 31-33). Margaret is all about pushing limits. She tries to awaken the wild and jealous side of Macomber, by kissing Wilson right in front of him and having sex with him. She is not happy in her marriage, but she does not want to leave her husband because of his money. Therefore she tries to change him, and make him more of a man, by provoking him to change. When Macomber shoots the buffalos, he does undergo a big change to a more manly and fearless character.

When he returns to the bush where one of the buffalos went in to, it abruptly comes rushing towards him. Suddenly Francis Macomber lies dead in front of the buffalo, but it is not the animal that is to blame. Margaret Macomber fired a riffle from the car, which hid her husband in the head and killed him. Whether or not it was on purpose is difficult to say, but in the last couple of pages, it becomes very clear that Margaret is not happy with her husband’s sudden change of character. He is becoming a bit more like Wilson, and the two men start to accept each other, whereas it was pure hate in the beginning. “Isn’t it sort of late?” Margot said bitterly.

Because she had done the best she could for many years back and the way they were together now was no one person’s fault. “Not for me,” said Macomber” (page 21, line 7-9). Margaret realizes that now that he has got a new confidence, and he has become such a proud and fearless man, he is going to leave her when they return to England. Therefore it is possible that the shot was meant to kill him. That she intended to murder her husband, so that he would not leave her. Even though she cries hysterically, Wilson is also convinced that it was on purpose. He is mad that she did it because he was starting to see a true man in Macomber, but Margaret made Macomber’s newfound “Happy Life” a short one. 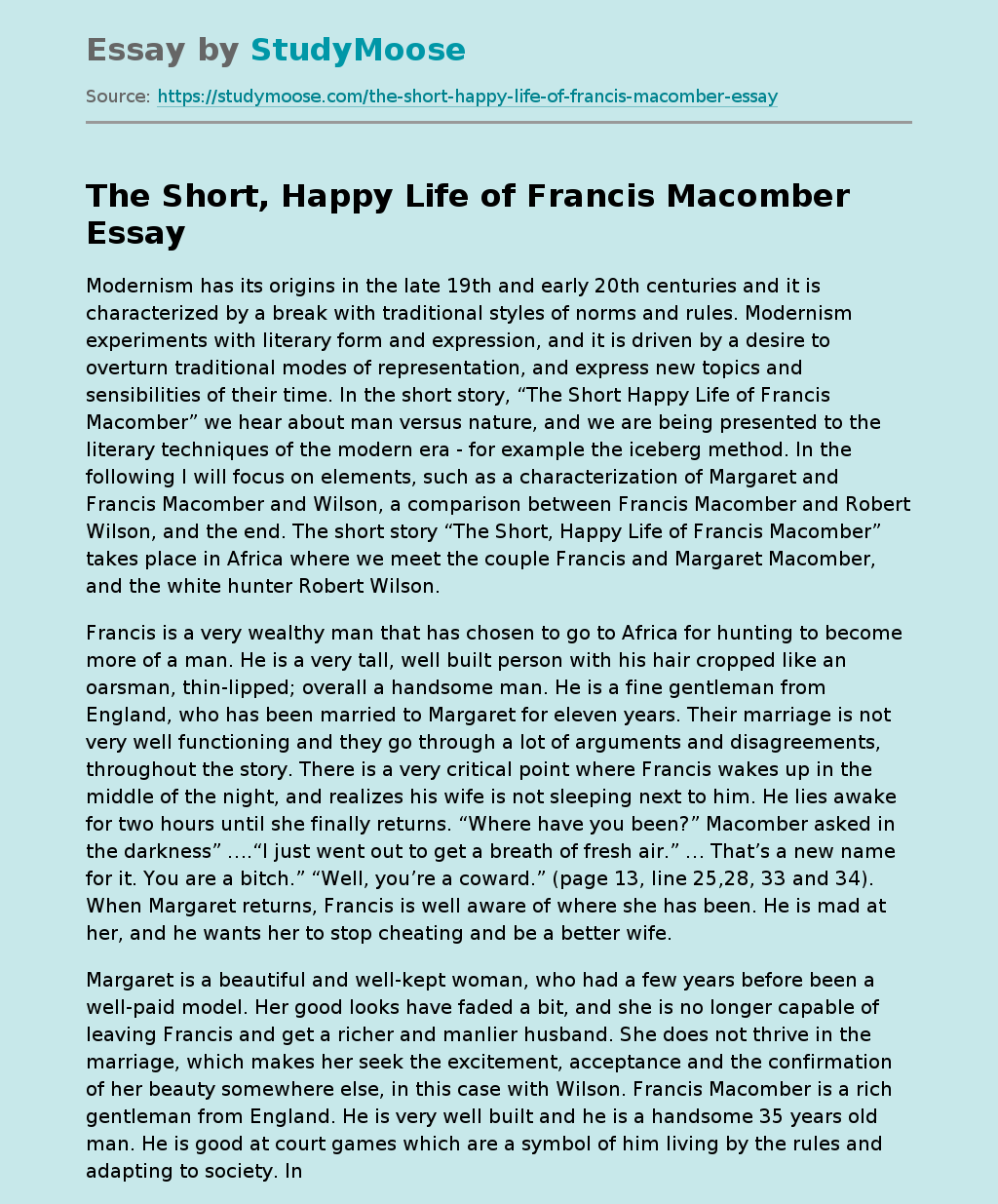