"Of Mice and Men"

Of Mice and Men by John Steinbeck is a realistic novel that depicts the life of two common men over a period of three days. The two main characters, George and Lennie, are practically opposites in terms of disposition and appearance. The author seems to have a variety of themes in the story including loneliness, relationships, and dreams. John Steinbeck uses a wide variety of literary devices including allegory and similes.

Don't use plagiarized sources. Get your custom essay on
“ “Of Mice and Men” ”
Get custom paper
NEW! smart matching with writer

One of the most powerful devices that Steinbeck uses is foreshadowing.

The shooting of Candy’s dog foreshadows the death of Lennie. Steinbeck spends a great deal of time illustrating the relationship between Candy and his dog. They have been together for many years and they keep each other company in the same manner that George and Lennie do. This makes these three men very different from the rest of the ranch workers who are primarily loners.

When Carlson shoots Candy’s dog in the back of the head, Candy loses his companion, which makes it evident that something similar will happen to George.

Lennie is like Candy’s dog. He is even described by Steinbeck with animal-like qualities. His hands are described as “paws” and he drinks water like a “horse”. Lennie’s passion for animals makes him more animal-like as well. The death of the mouse, puppy, and Curly’s wife all help to foreshadow the death of Lennie. When George finds out that Lennie has killed Curly’s wife he knows that Curly will seek revenge.

George alone finds Lennie in the brush and assures him that he is not upset about what he did. With Lennie’s back turned, George tells him about their dream one last time. He shoots Lennie in the back of the head in the same manner Candy’s dog was shot and with the same gun. “He never knew what hit him”. However, George was able to shoot Lennie because he did not want to see him killed by Curly while Candy was unable to shoot is dog. This makes George a stronger character. 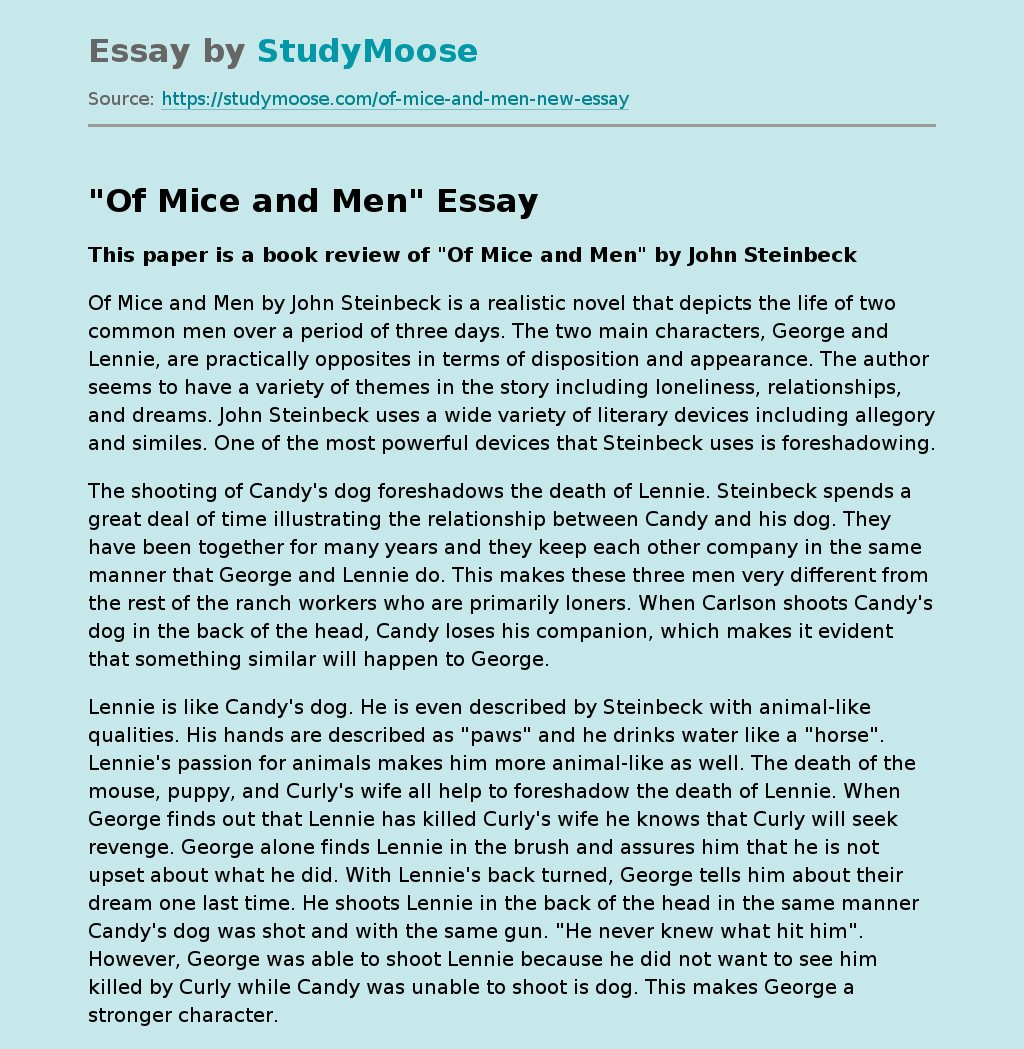