Caring is a simple yet strong and powerful word, an abstract concept commonly found in nursing theory. Caring implies responsibilities, connections, and trust. Nurses take on the role with pride and honor. Nurses are caregivers. Many nursing theorists looked and still do look at caring as a core concept for nursing practice. Three main theorists come to mind, Jean Watson, Patricia Benner, and Kristen Swanson, when thinking about nursing and caring, although many of theorists highlight the importance of caring in the nursing profession.

Don't use plagiarized sources. Get your custom essay on
“ Nursing Theory and Caring ”
Get custom paper
NEW! smart matching with writer

Each theorist has an independent definition of what caring is, ways to use it in nursing, and what it means in the nursing world. The purpose of this paper is to examine the definition of caring through nursing and nursing theorists, compare different definitions based on the core concept of caring, analyze Jean Watson’s Theory of Human Caring, and examine the current relevance in nursing practice, research, and development.

The Oxford English Dictionary defines caring as “to take thought for, provide for, look after” (“Care,” 2011, para.

3). Theorists look at the concept of caring and break it down to discover the exact meaning behind the abstract concept. Kristen Swanson developed a middle-range theory of caring based on maternity and early loss of pregnancy. Middle-range theories “have a high explanatory value” (Andershed & Olsson, 2009, p. 598). Swanson’s researches lead her to the discovery of what caring means. Swanson described caring as an accountability and connection to another person (Andershed & Olsson, 2009).Patricia Benner is more well-known for theory of Novice to Expert Nursing.

Through her research she began to look at the common phenomena surrounding nursing. Patricia Benner worked with Judith Wruble on the theory Primacy of Caring, an attempt to unveil certain factors such as nursing practice, stress, coping, and the outcome of illness (George, 2011).

One of the core phenomena surrounding nursing practice is the concept of caring. Benner defined caring as “an essential skill of nurses; a basic way of being in the world” (George, 2011, p. 662). Benner’s definition offers little in respect a more concrete understanding. Other theorists who attempt to define the abstract concept include Boykin and Schoenhofer, Florence Nightingale, and Virginia Henderson. The leading lady in theory on caring is Jean Watson. The ethics of caring is the foundation for Jean Watson’s theory. Watson defines caring as “the coming together of a nurse and another in human-to-human transaction” (George, 2011, p. 662). Her theory offers more definition to the concept of caring and what caring within nursing entails.

All of the aforementioned definitions have a similarity in the way humans are part of the caring. Each looks at the value placed on an individual and the holistic approach to that individual (Bailey, 2009). The concept of caring does not look at one specific attribute of humans, but the person. Each theorist took the concept of caring and established the caring as a fundamental and integral part of nursing. Watson looked at caring as a relation-ship between two humans. Swanson’s approach was the effect caring had on a certain population. Swanson’s efforts were to bring back to nursing practice the care that originally attracted most nurses (Watson, 2009). Benner’s concept derived from the skills necessary for nursing. Benner’s previous theory of novice to expert goal was to explain the progress of a novice nurse to an expert nurse using knowledge and experience to provide care. Bailey (2009) broke down the variety of caring definitions and discovered the essentialness of caring for the 21st century nurse. Each theorist takes caring and applies it to how nursing functions with a person in a holistic and comprehensive manner.

Jean Watson, born in 1940, developed the theory of caring and published it in 1988 with a revision in 1997. As a contemporary nursing theorist, she garnered respect from some of the most notable theorists such as Nightingale, Henderson, and Benner. Watson has received honorary doctorate degrees, received numerous rewards, and still educates at the University of Colorado Denver. The base of Watson’s theory is the ethics and moral values placed on a person, not necessarily on patients. Watson’s concept is the need to preserve the dignity of the whole person through care and respect (Bailey, 2009). The care and respect Dr. Watson refers to is the connection the nurse makes with the patient and the family. The respect she refers to belongs also to that connection. Metaparadigms are world views.

Nursing theory tends to center on four key concepts, person, environment, health, and nursing as metaparadigms. Watson’s theory of caring centers on the person, or persons, affected by the nursing care provided. In 2010, Dr. Watson gave a thrilling and emotional speech about the nursing care her father, mother, and stepmother experienced. The speech centered on the care and compassion provided by the nurses encountered (Fights, 2010). The story accurately depicts Jean Watson’s concentration on the metaparadigms of person and nursing. Her very moving story led to the Academy of Medical Surgical Nursing to adopt three words to define the medical-surgical nurse; compassion, connection, commitment (Fights, 2010).

The concepts and theories provided by Dr. Jean Watson still thrive in current nursing curriculum and practice. The United States faces one of the largest health care issues and reforms. Nursing shortages and increased expenditure on health care has caused the nation to look at ways to transform the current health care setting into a more profitable business. Jean Watson believes this happens through reinforcing the Theory of Human Caring throughout the health care field (Watson, 2009). Part of Watson’s theory is the 10 factors of caring The first three factors of caring make up the philosophy of Jean Watson. The concept behind the philosophy of caring is to practice in a caring model and not a curing model. Jean placed a large amount a value on the need for humanistic and altruistic care, the instillation of hope and faith in care, and sensitivity to the nurse and the patient receiving care (Nursing Theories, 2011).

Current practice of the Caring Model presented by Watson includes Central Baptist Health in Lexington, KY., St. Mary’s Hospital in Richmond, VA., and Scottsdale Health Care in Scottsdale, AZ., and many others. Government health care reform has provided health care systems to look at the satisfaction of the patient and family in relationship to reimbursement. This is an attempt to cutting health care costs nationwide. The result is patient and family-centered theories that guide evidence-based practice Jean Watson’s theory is ideal for the transformation.

Research has a focus of evidence-based practices. The Johanna Briggs Institute provides sound and peer reviewed information to those knowing where to look. In researching the theory of caring, the application to current health settings is not always spelled out. In an evidence-based practice sheet produced by the Johanna Briggs Institute on stroke victims, there is a clear representation of Watson’s theory. The evidence demonstrates the need to understand the psychosocial spiritual experiences of stroke victims during the recovery process (Johanna Briggs Institute, 2009). Watson’s theory has an element that takes into account the human experience of the spirit instead of the spiritual experience of the human (Nursing Theories, 2011). Nurses need to look at a patient and what he or she is experiencing to gain the connection with the person and family and also demonstrate the commitment and compassion for what the patient and family is experiencing.

Many theorists take into account necessity of caring for a patient. Benner, Henderson, Swanson, and Watson all developed theories and philosophies based on the core concept of caring and providing care in the nursing world. Although all theories are part of current curriculum and many appeal to the contemporary nurse, Watson’s theory has stood the test of time and has been resilient even during hard economic times and reform. The 10 factors of caring of the caring philosophy govern the way a nurse practices and looks at a patient. The spiritual experiences of a patient transformed into a deep connection between the nurse and patient. Reform has pushed systems to re-evaluate the way providers deliver health care and the perception of nursing care based on that care. Systems use financial incentives to create change. Evidence-based research uses Watson’s theory and definition of caring to provide background and support. Watson’s definition broadens the scope of nursing and includes the holistic approach to all nursing realms. 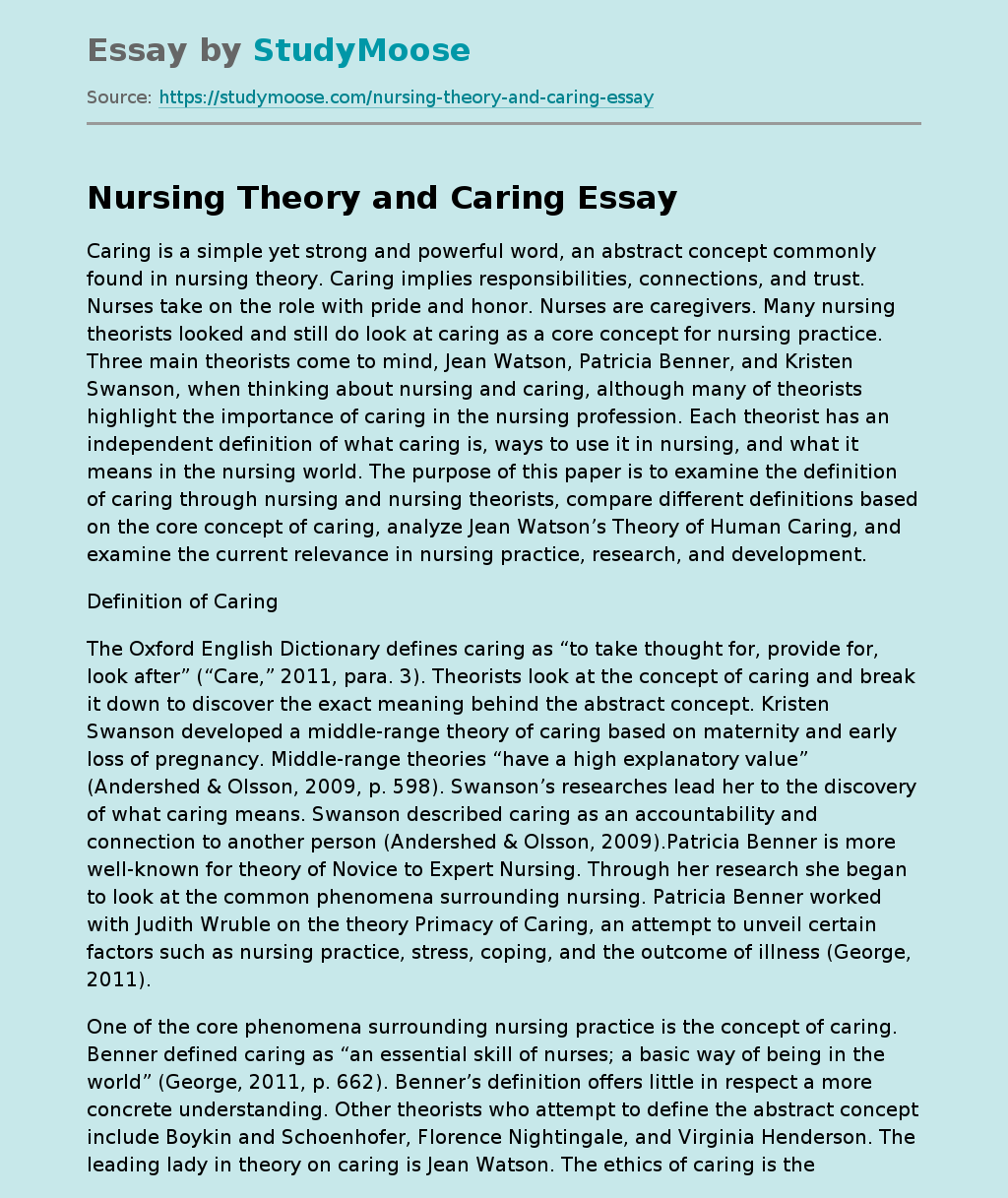