This paper will discuss how Nursing’s History has helped to inform nursing’s future. It will discuss the turn of the twentieth century and the importance of this era on the nursing profession. (Brodie, 2010) The development of nursing education and Florence Nightingale’s contribution to modern day nursing (Hoyt, 2010). Possibilities for the future, which will enable further social standing and the prominence of nursing as a profession. (Fairman, 2012)

The study of nursing history helps us to better understand the issues of autonomy, unity, supply and demand, salary, and current practice.

Don't use plagiarized sources.
Get Your Custom Essay on Nursing History Just from $13,9/Page

Learning from the role models of history, make positive changes in the present and provide options for the future. Provides the ability to make improvements on past practices and creating a sense of best practice. (Brodie, 2010).

Florence Nightingale is considered to be the founder of modern day nursing. She was influential in the development of nursing education, practice, and administration. (Hoyt, 2010) Nightingale’s work served to establish nearly all the advancements that would arise in the nursing profession in the coming decades.

It was from her work, Notes on Nursing, set the tone for all theories that followed.

Prior to 1840, no formal education was provided to people who cared for the ill. These skills and lessons commonly provided in the form of generational learning or trial and error. The care of the sick usually fell to women of a lower social standing or class who were unable to obtain any other work. Nightingale identified the need for formal training of nurses and workers in the public health arena. There has been substantial growth in the innovation of the nursing profession; there have been advanced nursing programs established due to the ‘increasing complexities of modern nursing’. The turn of the twentieth century saw the creation of professional nursing organisations that allowed our profession to be self-regulated, this included formal training and competency standards. (Brodie, 2010).

Given that Nursing evolved into the self regulated profession it is, provides the opportunity to have a strong stance in the negotiations and establishment of appropriate working conditions, working hours arrangements and collective agreements. These negotiations and agreements were made later in the 20th century and now stand as a benchmark for generations of nurses to follow. (D’Antonio, 2010)

The history of nursing provides current day nursing teachers, leaders and professional’s insight into opportunities and possibilities in our profession, aiding us to be accountable for our actions and enables us to provide comment and feedback on potential improvements. (Fairman, 2012) It enables a review of procedures and policy and make recommendations for improvement. It confers the opportunity to be integral in policy implementation for the betterment of health care available to the public.

‘Virginia Nursing History’ is a website that was created in 2001; the site is overall a very useful and provides a nice perspective on leadership in nursing in Virginia from around 1900 to the near present. (Gibson, 2009) Gibson highlit the importance of websites such as this to show the progress and steps that have been made in the nursing profession. It highlights the extraordinary work that high performing nurses have accomplished and the prominent members of the nursing community. Gibson mentions that the work done by nurses tends to go unnoticed or unreported and tools such as this, using modern day technology (internet) to show the progression of our profession.

Having knowledge of the history of nursing helps us to understand where nursing came from and how nursing evolved as a profession throughout time. It provides us with the opportunity to reflect on how things were and why we do things the way we do. It shows us that we have grown from being regarded as the lowest working class, ones who didn’t require training or education. Transformed to a profession highly regarded for its intensive training and requirements, which are providing us with the capability to grow, expand and continue to firm the foundation for future potential nurses. The generational change and progression have given us prominent stance in the public health arena. Thanks to the evolution of nursing and the timeline of growth we, as nurses, are respected and are in a position to continue to grow and improve. Given the growth in our profession and interesting point to ponder is, where will nursing as a profession be in decades to come? 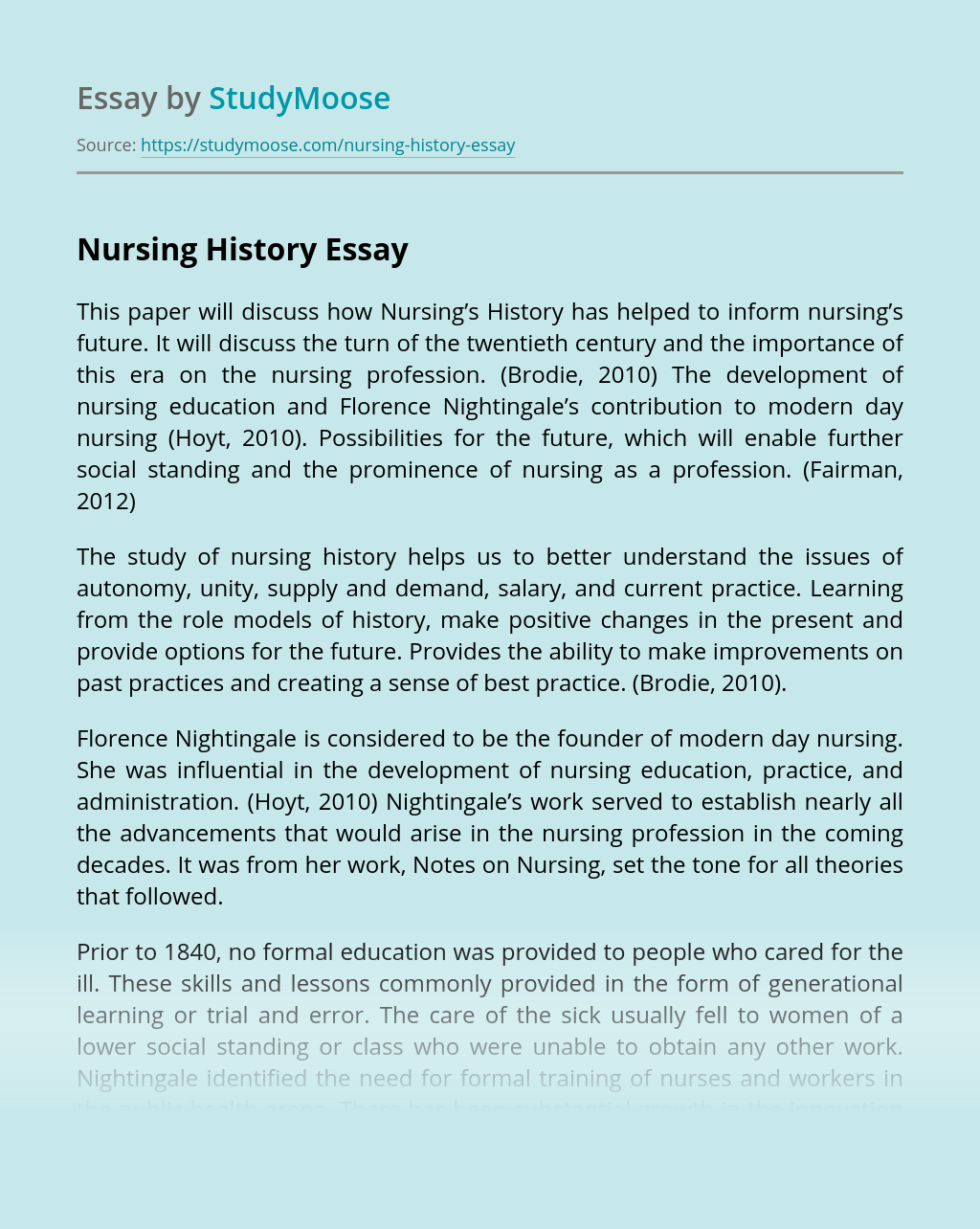 For my strategic group map, we need 3 competitive groups: 1. Aspirants 2. People who are typically on the same as me. 3. Fast followers group Put on the strategic map Chapter 3 Assignment This learning Module introduces the learner to the tools for external environmental analysis. Properly understanding a company’s external environment requires asking... VIEW ESSAY

This paper will discuss how Nursing’s History has helped to inform nursing’s future. It will discuss the turn of the twentieth century and the importance of this era on the nursing profession. (Brodie, 2010) The development of nursing education and Florence Nightingale’s contribution to modern day nursing (Hoyt, 2010). Possibilities for the future, which will... VIEW ESSAY

View sample
Get Essay
Leadership and Management in Healthcare

There is an increase in societal changes and demands in the nursing profession today. It is vital that nurses keep up to date with what is happening in their profession. This is attainable by becoming a member of professional organizations (American Nurses Association, 2014). The three major categories of nursing organizations include: national, state, and... VIEW ESSAY

Health care is a fast evolving field with advancements of technology and treatment options growing every day. The delivery of care has grown and often shifts direction over the years to accommodate changing population demographics and needs of patients. Many factors play a part in the role of health care and medical treatment, one of... VIEW ESSAY