Now a day, people already lived in a digital world where their actions are overly dependent by the technologies and social medias that they have. The rise of social media changes the way how people lived and build a self-concept that makes the process of the looking glass self infinitely more complex. Cooley (1902) is the one who introduced the looking glass self which posits that the self-concept is built, in part, by how an individual sees him or herself by the reaction of others.

Don't use plagiarized sources. Get your custom essay on
“ Now a day people already lived in a digital world where their ”
Get custom paper
NEW! smart matching with writer

Although we can see that social media can give a lot of changes in building self-concept but those changes leads more on the disadvantages which can ruin the self itself.

Building self-concept and gaining self-esteem typically has a very important factor in one’s social life. But because of the negative notion we have in our imaginative minds, we hardly achieve those things. Many are genuinely scared of showing their true self because we have no idea what others might say about us that’s why people depend already on social media where they can filter and edit their own self to be accepted by everyone.

According to Pantic (2014) anxiety, depression, psychotic disorders and low self-esteem are all the likely results of social networking sites, especially Facebook. Looking upon this study, we can say that social media can really change the self-concept of a person but on the other hand, our realities and hardship in our true life is gradually fading. We merely share what is beautiful about us, and we can’t just let anyone know our flaws which lead us to be more socially conscious, thinking that we can’t just act crazily with others and we should always be vigilant about our actions because it may ruin our reputation and our stardom.

By that, many social media users perform self-doubt that imposes pressure and fallout to live on an unrealistic life that becomes more dangerous on building our own self-concept. Because, we are more likely to conceal all of our imperfections in life that may lead us to anxiety and depression.

Firestone (2019) also added that one of the social media networks that stood out from the rest that have a positive effect was YouTube. Video streaming platforms scored very high in categories like awareness in self-expression and community building.

Just like from the research of Jones (2015) where he posits that the goal of his study was to open a new way which to consider the social media practices within a self-concept frame. This only implies that social media can be a powerful means of communication, from the basic level of self to the global self which magnifies various aspects of life.

But contradictory of their study was from Jacobson (2019), where he conducts a research at Stanford University saying that after the recent spate of college suicides, he coined the phrase “duck syndrome.” The term duck refers to the way a duck appears to glide effortlessly across a pond while below the surface its feet frantically invisibly struggling to stay afloat. This denotes that a person can project a perfect image on social media, where they can have feeds packed with inspirational quotes and filters images showing happily and being attractive to everyone. But behind the digital curtain they were struggling emotionally. Where they can’t just seek help for others because they don’t know how. They are already used to filter their life in social media that’s why they forgot that they also have peoples surrounding them in the real world.

This study views the effect of social media practices in the changes of self-concept but in a deeper way. Where on, social media practices can boost ones social aspects on medias but it tends to be more complicated in the sense that we are more likely to interact in the digital world rather than the real world. Just like the findings of Jacobson (2019) who states that we struggle to stay afloat. It gives us pressure to look perfect and impressed peoples on social media rather than with our own family and friends in the real world.

Social media is very useful to everyone. It can constantly change one’s self-concept that can develop more self-esteem, be more socially aware and gain a lot of attention. But it doesn’t mean that you should only confide on social media just to be accepted by everyone in this world. Privacy matters. Learn to control yourself and not allow anyone grasp everything about you because they can exploit this against you. Don’t just also allow them to manipulate you because you have your own life. You might get a lot of praises but not everything there are true, some are simply doing it just also to capture attention with others.

Therefore, as you confide more on social media, the more you are prone to anxiety and depression. Because you are used to filter yourself and share everything on social media on which no one can, in fact soothe you when struggles occurs in your life. So, even though you can foster your self-esteem in social media, remember that you also lived on the real world where you have your true family and friends that you can relay on when you have problems in life. They are the sincere ones who are eternally on your side no matter what happen to you. You don’t need a lot of praises in social medias. What you need is love, care and support for the people who to are truly on your side.

Now a day people already lived in a digital world where their. (2019, Dec 05). Retrieved from https://studymoose.com/now-a-day-people-already-lived-in-a-digital-world-where-their-example-essay 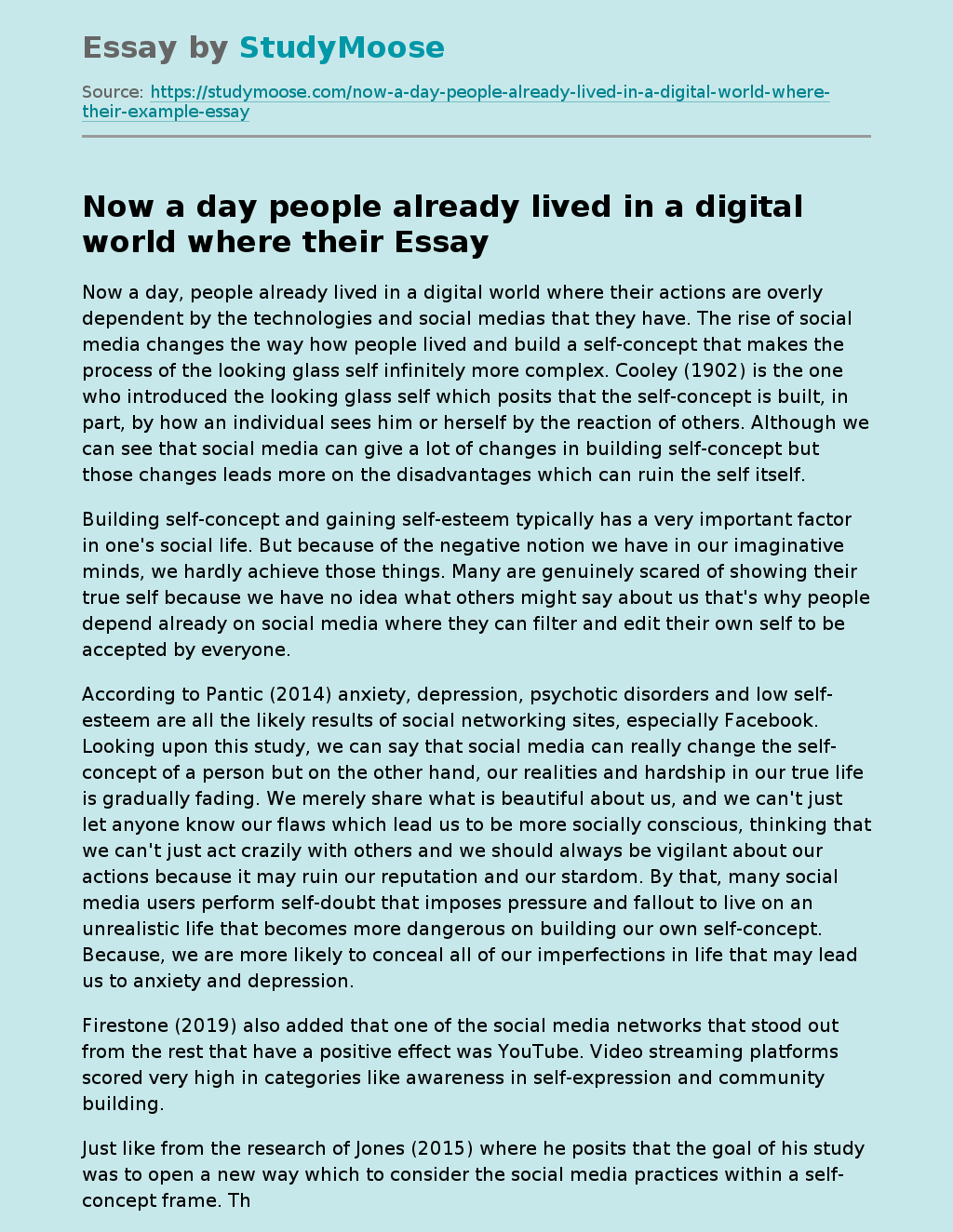