Learning begins with what one already knows perceives and reacts

Learning begins with what one already knows, perceives and reacts to, that is, what one knows shapes what is perceived and provides the basis for further learning and development (Carlson 2013). There are many instances where a child could learn from. The theories of Piaget and Vygotsky made us understand that, child can learn from both nature and nurture. According to Piaget, children can get their intelligence from action and intelligence is adapted from nurture. He states that, “knowledge is an action or event rather than a state” (Miller 2016).

Don't use plagiarized sources. Get your custom essay on
“ Learning begins with what one already knows perceives and reacts ”
Get custom paper
NEW! smart matching with writer

It is when there is a relationship between the child and an object. Children reacts to what they see or know. Their understanding or knowledge change when they develop or grow and begin to do different things. Piaget explained his theory in four developmental stages. In his first stage, which is the sensorimotor is when the child is from 0 to 2 years old. This is where they exhibit a set of reflexes. They reflex if any of their body is touched.

Children at this stage interact with the environment and this is where they have the potential to know everything about the world. In the second stage, preoperational period which is from 2 to 7 years old. Children at this stage are now able to play or use objects and symbols. The third stage is concrete operational stage and it is from 7 to 11 years old. The last stage which is from 11 to 15 is called the formal operational stage. Vygotsky states that, “learning awakens a variety of internal developmental processes that are able to operate only when the child is interacting with people in his environment and in cooperation with his peers” (Miller 2016).

Vygotsky also described his theory as cognitive development thus the interaction between social interaction, language, and culture. In his view, learning happens before development occurs and that is done when children learn history and symbols. Both Piaget and Vygotsky focused on language spurt. Some of the differences that were found in Piaget and Vygotsky was that, “Piaget developed a theory wherein the individual constructs his or her knowledge individually or solitarily whereas Vygotsky put forward a theory in which one only develops as one participates in various forms of social interaction, using then tools like abacus, pencil, hammer etc. and signs which are also social in their very nature” (Lourenco 2012). In the podcast, there was no understanding of any symbol by the Ildefonso guy. He learnt how to sign language after Susan had repeatedly signed with him. As Piaget said, child use symbols in learning or knowing their world. The deaf never learnt anything like that. He didn’t have any symbol or sign in mind till Susan started signing to him. According to Piaget early language can be conceited and becomes socialized with development. Language and communication depend uniquely on the development of how one thinks. People are fond of organizing their experiences in to structures to help them whenever they need it. Every experience can be easily be adapted when one gets a better explanation of it. In the podcast, Susan had to explain those symbol to the Ildfonsa guy to be able to understand. Another difference in Piaget and Vygotsky’s theory I found was that, Piaget said that cognitive development is driven by a child’s inbuilt tendency to adapt to new experiences whereas Vygotsky said that cognitive development is driven by social interaction. Vygotsky explains that children learn through instruction and guidance whereas Piaget explains that children learn by self – discovery. Example is when a child is taught how to write his or her name through guidance of the parent.

Learning begins with what one already knows perceives and reacts. (2019, Nov 19). Retrieved from https://studymoose.com/learning-begins-with-what-one-already-knows-perceives-and-reacts-example-essay 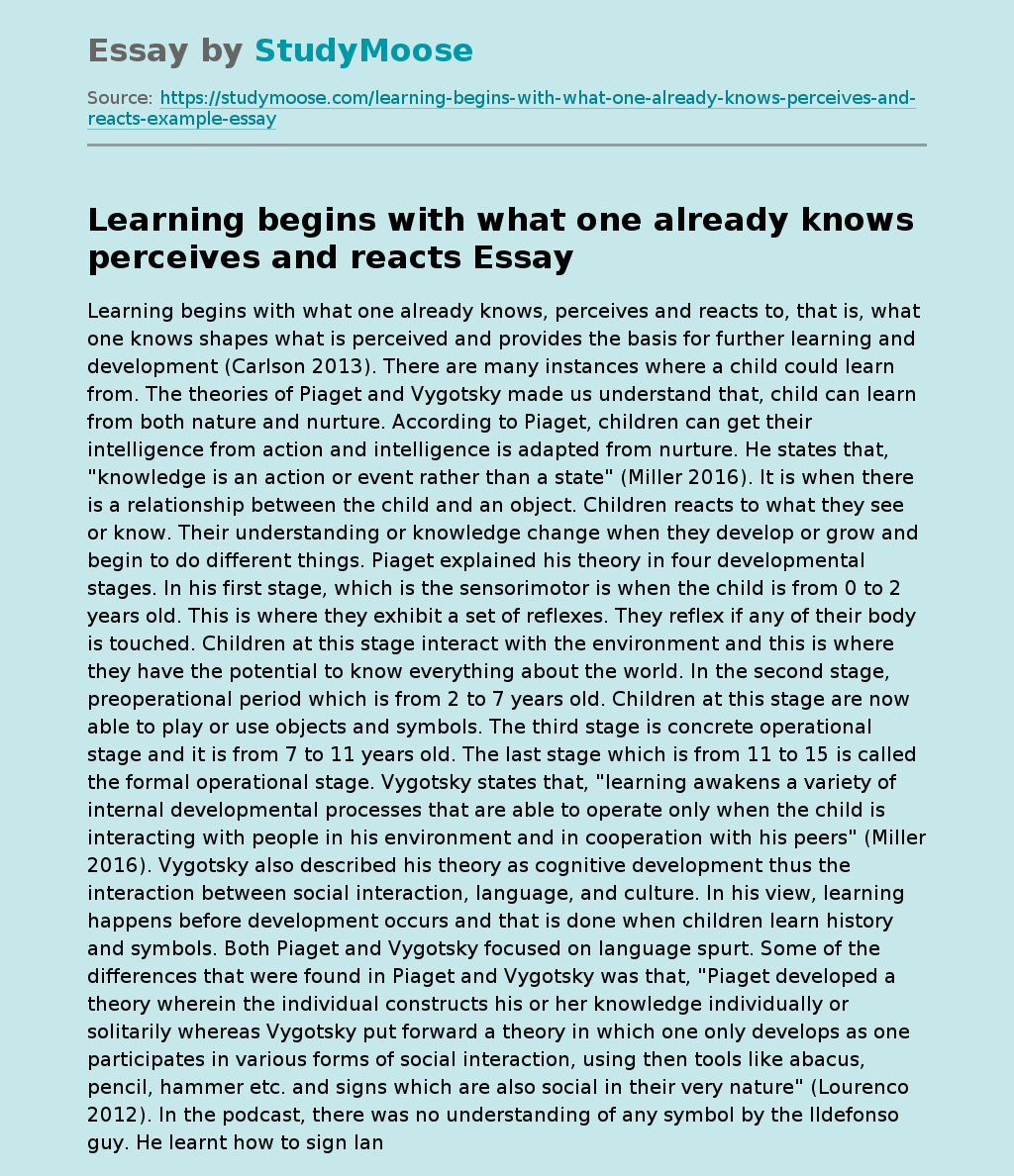