Nonverbal communication plays an essential role in any conversation. Individuals who are aware of nonverbal actions during conversations can more effectively interpret what is being communicated.

Look at the interactions between the individuals in the following photos and interpret what you think is being expressed through nonverbal communication. Please describe the nonverbal cues that lead you to these interpretations.

What is being said nonverbally by each person?

Don't use plagiarized sources.
Get Your Custom Essay on Nonverbal, Interpersonal, and Textual Communication Worksheet Just from $13,9/Page

The woman appears to be trying to hold the conversation together, but the man looks annoyed and ready to leave the conversation. Both individuals are showing gestures through body movement. In this situation the man looks as if he is saying “I do not want to hear it”. Both facial expressions are cues describing the non-verbal communication. The argument or issues tends to not result in a resolution. The conflict seems to still be apparent in the conversation.

This appears to be a relationship that needs work. By the woman holding his arm, I would assume the individuals have a close relationship. The man could be hurt by a certain situation that he is just now learning more about.

If he is waiting for a job interview, what impression do you think he is going to make?

If this individual is waiting for a job interview, he is giving the impression of not caring about receiving the job at all. I would assume he is only there, because he has to be. The person given the interview could assume he is hung-over and not professional. This individual is slouching in his chair, which gives off the impression of being lazy. If this individual is preparing for an interview he should have his shirt tucked in and sitting up straight in the chair. If I was the person giving the interview and walked out to him presenting himself in this manner I would not give him the time of day. I would instantly judge the individuals character as not being a hard-worker. I would assume he would expect everyone else to do the work for him instead of taking responsibility for his actions. The individual also is wearing jeans with holes. This is another cue of unprofessionalism.

What is the interviewer (the woman on the right) communicating with her nonverbal positioning?

Compose responses to each of the following questions.

Textual communication, or content that is read or viewed, also plays a role in communicating with others. Textual information may gain deeper meaning when the text is spoken or viewed in a specific context versus when it is read.

Read the following quotes and write a 50- to 100-word interpretation of what you think is being expressed. Support your responses. If you wish to include references, please format your responses consistent with APA guidelines.

“Maybe all one can do is hope to end up with the right regrets.” (The Ride down Mount Morgan, Act I) — Arthur Miller

In this quote, I think the author is trying to express life with no regrets. All any one can hope is to end up with all the right regrets. No one wants to live a life thinking what if or what could have happened in his or her life. Regrets are considered to be something that has be done that an individual is sad or disappointed over. I think individuals should not live with any regret, because at one time those regrets were something you wanted to experience. If people complete life with all the right regrets than there is nothing to actually regret. I really liked this quote, because when people think about their lives, every one wants to be happy in all the decisions that were made throughout life’s journey.

“Human history becomes more and more a race between education and catastrophe.” (The Outline of History, Ch. 41) —H. G. Wells

Everyone tries to learn from mistakes. In history, the world has continued to be consistant in making mistakes and trying to resolve them. I think this quote presents that if people do not learn from mistakes that mistakes will continue to be made. I think the race for education such as advancement of technology could result in a postiive outcome for the human race or it could be catastrophic. It could mean that if we continue to educate ourselves then we can overcome anything destructive.

“The world is very different now. For man holds in his mortal hands the power to abolish all forms of human poverty and all forms of human life. And yet the same revolutionary beliefs for which our forebears fought are still at issue around the globe—the belief that the rights of man come not from the generosity of the state, but from the hand of God.

We dare not forget today that we are the heirs of that first revolution. Let the word go forth from this time and place, to friend and foe alike, that the torch has been passed to a new generation of Americans—born in this century, tempered by war, disciplined by a hard and bitter peace, proud of our ancient heritage, and unwilling to witness or permit the slow undoing of those human rights to which this nation has always been committed, and to which we are committed today at home and around the world.

Let every nation know, whether it wishes us well or ill, that we shall pay any price, bear any burden, meet any hardship, support any friend, oppose any foe, to assure the survival and the success of liberty.” — John F. Kennedy (1961 Inaugural Address)

After viewing this quote, I feel as though I should have a better understanding of what is being communicated. The United States has been through strong ups and weak hardships, but through everything we should still stay committed and dedicated to our nation. I think the last sentence expresses the main point that is trying to be achieved, that even if nations do not show us kindness at times that we will also present success of freedom and will be at aid for all nations. I think this is directed to show that every one during this time has experienced hard ship of war and struggles, but as a nation we will come together and over come any boundaries in the way of achieving greatness.

“In a sense we’ve come to our nation’s capital to cash a check. When the architects of our republic wrote the magnificent words of the Constitution and the Declaration of Independence, they were signing a promissory note to which every American was to fall heir. This note was a promise that all men, yes, black men as well as white men, would be guaranteed the ‘unalienable Rights’ of ‘Life, Liberty and the pursuit of Happiness.’ It is obvious today that America has defaulted on this promissory note, insofar as her citizens of color are concerned. Instead of honoring this sacred obligation, America has given the Negro people a bad check, a check which has come back marked ‘insufficient funds.’

During this time in history, the speech was presented to give awareness to all Americans about the way race was being held over opportunity. After the Constitution and Declaration of Independence were signed every American were held to live by these guidelines and laws. America failed in abiding by these rights in America’s history. America considered races other than white to be negative instead of positive. In a sense the awareness of these rights were considered to be a check to the world to present the security of justice and freedom once again to everyone no matter race. 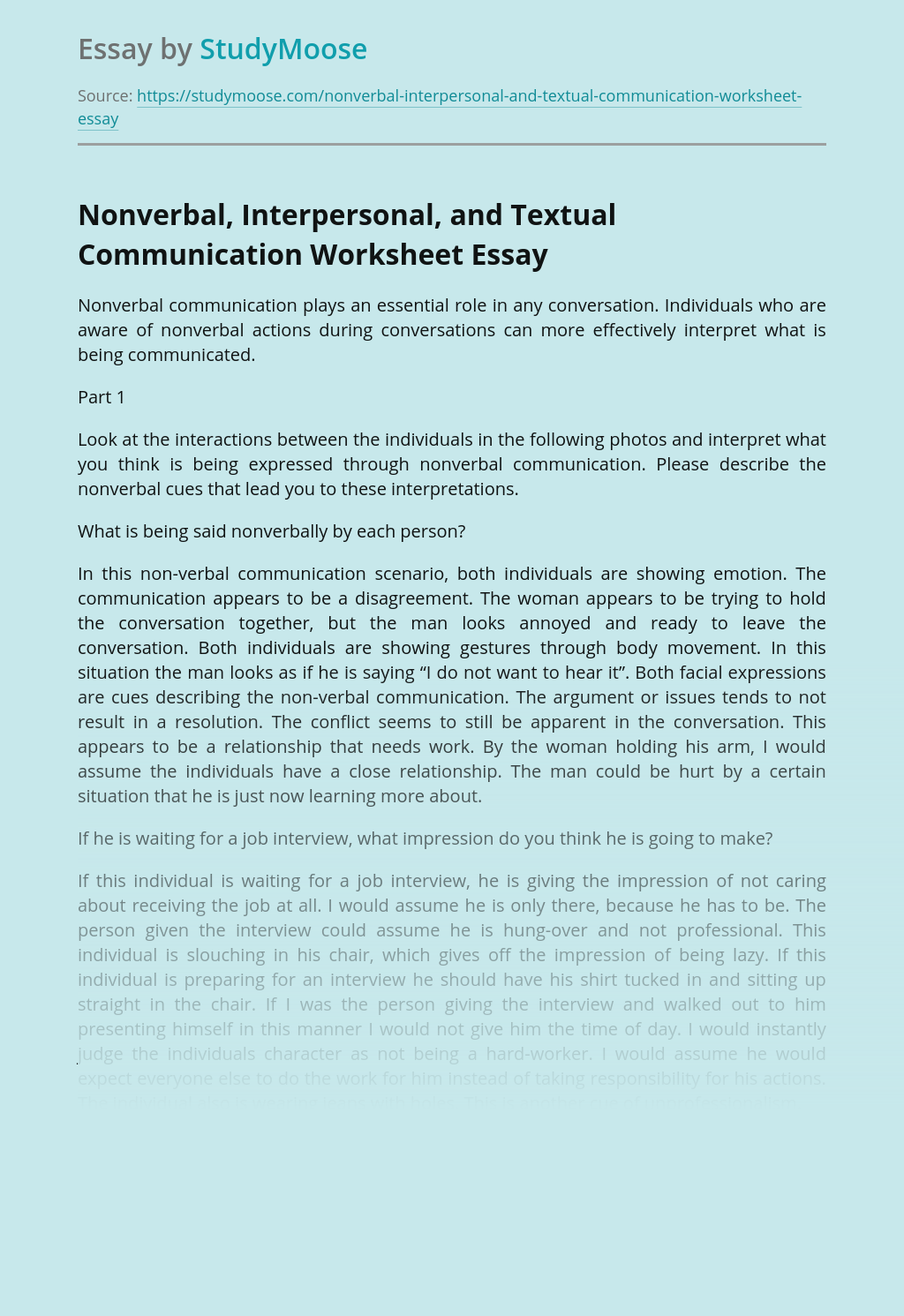 Write a short essay which explains one-to-one interaction and a group interaction during the work experience that you participated in.

Get Essay
The Role Of Electronic Communication

Intro Marketing, IMC and mass interaction are a few of the tested techniques for achieving maximum outcomes for showing an item for sale. Whether it is motion pictures, FMCGs, industrial electronics or autos. General Motors, Procter & & Gamble and AOL spend $2 billion dollar on marketing. McDonald’s spends $1.3 billion per year on advertising....

Learning outcomes: Outcome 1 Understand why effective communication is important in the work setting 1.1 Identify the different reasons people communicate. The main reason we communicate is because we want or require something. This may be for comfort: We may require something for our comfort in the form of food or drink, keeping warm or...