“Who gets up early? Farmers, bakers, doctors. Who stays up late? Muggers, streetwalkers, cat burglars.” (63). Anne Fadiman describes a human’s perspective on being a morning person, or as she refers to it “a morning lark”, verses a night person or “a night owl”. So how would you classify yourself; a morning lark, a night owl or are you a little of both? When reading the article, “Night Owl” by Anne Fadiman, I found that she provides her own views using scientific research about night people and morning people, the effects of being a night person has on her, and describes a contrast between a morning person and a night person through the use of literary devices.

Don't use plagiarized sources. Get your custom essay on
“ Night Owls vs. Morning Larks ”
Get custom paper
NEW! smart matching with writer

Our society stereotypes night owls as people that are out to harm others, to be mischievous, and/or people who are lazy because they sleep the day away. Although being a morning lark has its benefits, being a night owl has its benefits as well.

Fadiman’s observations on night owls are positive, especially since she is awake when the majority of the world around her is fast asleep. The “night owl” regimen seems to complement Fadiman because it serves as a time for her creativity to flow and it seems to flow for many others as well. She claims “I am not fully alive until the sunsets.” Her sleeping during the daytime does not reflect on her ability to accomplish her daily tasks efficiently. I believe that when you begin your day when the people around you are fast asleep you see the world in another light.

Fadiman goes on to describe the changes to shift work by saying, “it is easier to share a given territory when no everyone is out and about at once.”(63), which I can understand. Not everyone can effectively be working on the same schedule simultaneously, since the end result would most likely be an escalated unemployment rate for that particular area. On the other hand being a morning person you are able to reap the benefits of waking up with the majority of the population. Anne’s husband, George, is “a firm believer in seizing the day while it is still fresh”(63). I believe this to be true as well, you can accomplish so much more during the daytime.

Daylight provides many health benefits for humans such as Vitamin D, which is absorbed from the sun and keeps us healthy. It also gives us a clean slate every morning when we wake. Some conflicts can and do arise when you are in a relationship involving people with opposite sleep cycles. Fadiman explains “when we turn off the light at 11:30-too late for him, too early for me-George falls instantly asleep, while I, mocked by the bird that slumbers above my head, arrange and rearrange the pillows, searching for the elusive cool sides.”(62). Issues that are introduced for those people in relationships with different sleep and work patterns can include attendance at recreational and/or social activities and general sleep habits. Throughout Anne Fadiman’s piece, she makes good use of literary devices, such as imagery and symbolism, to set the tone for her audience. She writes the piece as informational but still manages to keep it friendly.

Immediately in the first paragraph she writes about having birds carved in on each side of the head posts of her and her husband’s bed. “On George’s side there is a meadowlark, brown of back, yellow of breast, with a black pectoral V as trig and sporty as the neck of a tennis sweater”(62) Fadiman describes the unique features of the lark that sits above her husbands resting head. She paints a bright vivid image of the lark for her readers in which she refers to the lark throughout her piece. Further in the writing she also describes a journey she had taken with a friend in New Zealand. Fadiman writes a description of her view from inside her tent, “…inside which a glowing candle lantern makes your muddy boots and damp wool socks look as if they were painted by Georges de La Tour, …” (64).

The symbolism used in Night Owl is the concept of owls and larks being used to describe a night person and a morning person and is used throughout the entire article. “Night Owl” was a well-written piece and introduced a topic that is not often discussed but affects almost everyone. She captured readers, including myself, with her use of colorful vibrant imagery and logical information that can be applied to her audience’s real life situations. We are society that views night as a threat and daylight as the prime time to accomplish tasks. With articles such as “Night Owl” people may realize the opportunities that await the night. The change to shift work in my opinion will only continue to increase and improve the preconceived notions of night owls.

Night Owls vs. Morning Larks. (2016, May 01). Retrieved from https://studymoose.com/night-owls-vs-morning-larks-essay 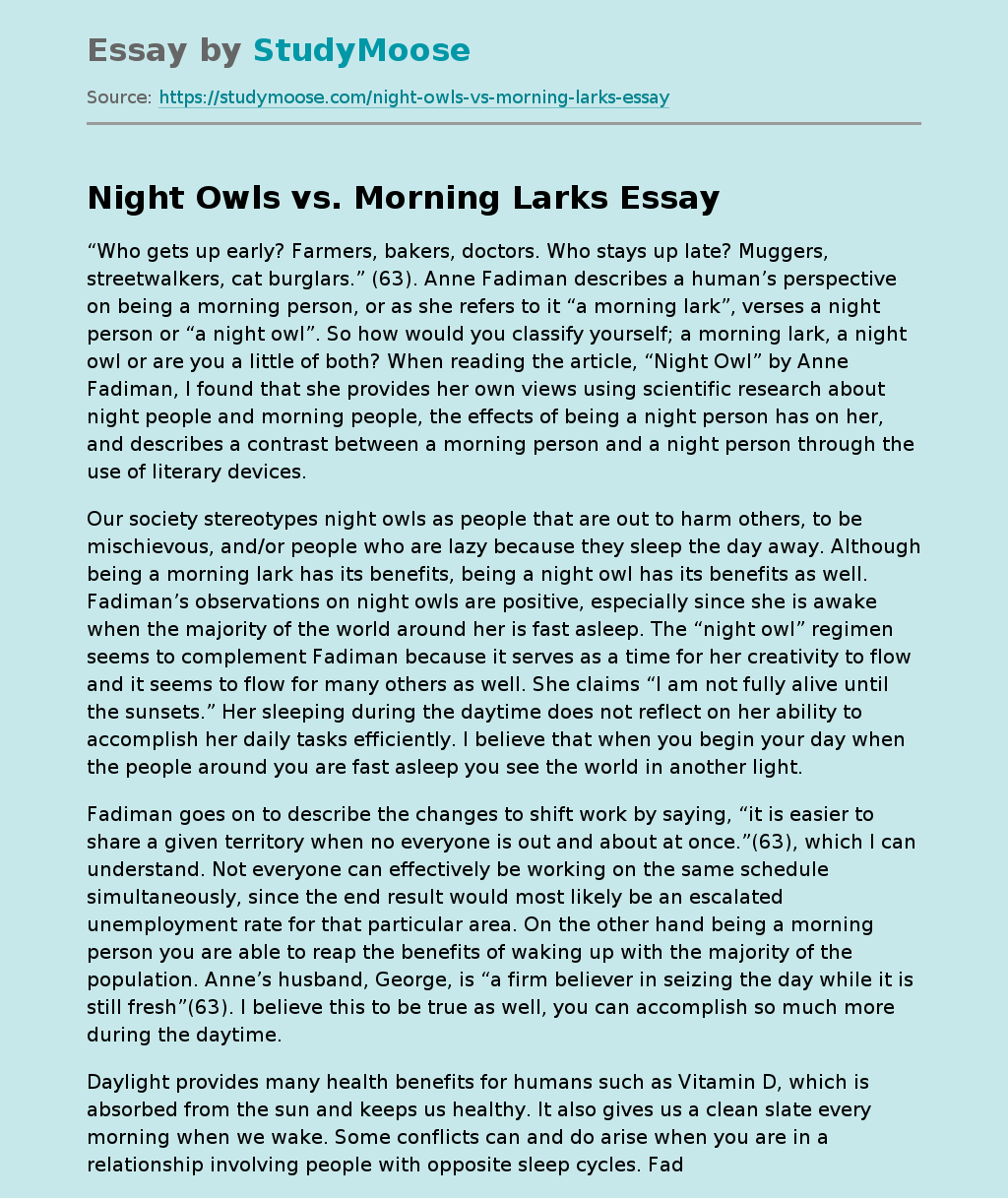