Nick Carraway, the narrator and important character in the novel The Great Gatsby by F. Scott Fitzgerald, is deeply characterized through what he says, thinks, and is seen as by others. Many different perspectives of Nick are evident throughout the novel. He is judged and characterized by himself, his friends, and other strangers that he meets in the novel. Fitzgerald uses more dialogue to characterize Nick than other mediums. In the beginning of the book, on the first page, Nick himself declares that he is the narrator of the book.

Don't use plagiarized sources. Get your custom essay on
“ Nick Carraway ”
Get custom paper
NEW! smart matching with writer

He states that he is “inclined to reserve all judgements” (Fitzgerald 1) because he has had many advantages which the average person would not have had. This is the first bit of character that we see developed in Nick’s character. He is not quick to judge people simply because he knows that if he was, he would be trying to understand a life which has not been a part of him.

It could also mean that Nick is conscious of what other people tell him, because his father told him “Whenever you feel like criticizing anyone, just remember that all the people in this world haven’t had the advantages that you’ve had” (Fitzgerald 1).

Clearly, Nick is an observant person based on the fact that the novel is narrated in such great detail by him. “Every friday five crates of lemons and oranges arrived from a fruiterer in New York—every Monday these same oranges and lemons left his back door in a pyramid of pulpless halves” (Fitzgerald 39).

Nick is super observant, as observations just as detailed as that are told on most every page in the novel. Nick is not always as forgiving and understanding as he claims in the beginning of the novel, however. There are times, although only a few, when Nick is judgemental towards others.

One quote stands out as a popular, recognizable line that Nick says on page 160. “‘They’re a rotten crowd,’ I shouted across the lawn. ‘You’re worth the whole damn bunch put together’” (Fitzgerald 160). This quote is an indirect insult and criticism toward the neighbors and residents who attended a party at Gatsby’s house. He shouts this to Gatsby after talking about Gatsby’s past and how he ended up where he is now. Nick can be characterized in that quote as being either extremely appreciative of Gatsby or being extremely judgemental of the crowd at the party.

Likely both, Nick is going against what he said about himself in the beginning of the novel, which also says that he sometimes makes false statements. Fitzgerald also uses physical descriptions to characterize Nick. “Dressed up in white flannels I went over to his lawn” (Fitzgerald 41). Although not much is described, only his clothes that night, we can still see character development within that description. The fact that he’s wearing simple, white flannels, although fancy and expensive, are also very neutral and humble.

Even though West Egg is considered to be “New Money”, Nick is more observant and in the background. It seems as though he would rather watch something than be watched by something. He could have worn flagrant colors and flaunted himself, but he chose to do the opposite. Another somewhat physical description of Nick is that he’s not a city-born character. He was born in Minnesota, not New York, and because of this, it could be implied that he grew up in a simpler place, where it did not matter what you wore or looked like.

This can be considered while characterizing Nick’s physical traits. Fitzgerald exemplifies Nick’s characteristics in multiple ways throughout the novel. The evidence Fitzgerald provides for the reader is clearly given and shows how Nick is not always what he wishes he could be from a personality standpoint. What Fitzgerald did to show the different sides of Nick’s character is a major reason he is considered among the top American novelists; and The Great Gatsby is by far his best work. 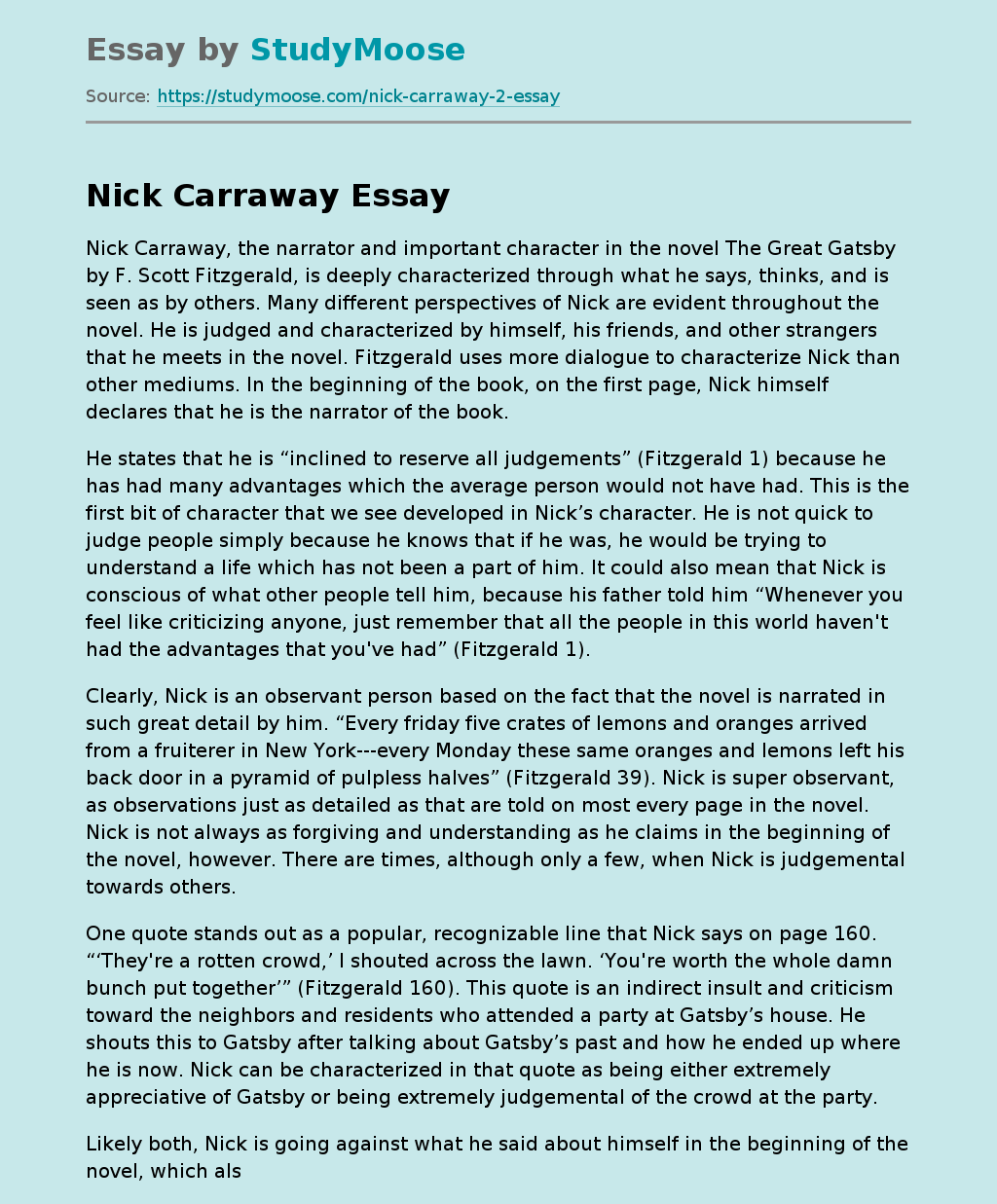