This passage is the last three paragraphs of the story. The passage is Nick’s thoughts on Gatsby and the future. This passage ends the story and concludes Nick’s narrative. It happens while Nick is going home to Minnesota in a train. It illustrates the main theme of the un-attainability of the American Dream.

In the first sentence of the passage, Fitzgerald uses the word “brooding” to show the mood of Nick, the narrator. Brooding gives an impression of deep, dark thinking.

Don't use plagiarized sources.
Get Your Custom Essay on Last three paragraphs of “The Great Gatsby” Just from $13,9/Page

Next, he talks about the green light at the end of Daisy’s dock, a symbol that pervades the writing throughout the work. It symbolizes Gatsby’s hopes and dreams for the future. Fitzgerald uses the word “wonder” to show Gatsby’s excitement for his future with Daisy. Fitzgerald also uses the word “obscurity” to describe the land west of New York. This gives the tone a careless tone because Nick doesn’t explain what he really means.

Nick also proceeds to call the Midwest “the dark fields of the republic.”

In the second paragraph, Fitzgerald mentions the green light again, calling it “the orgastic future.” This description shows the expectations everyone has for future, but only a few people attain it. The diction of the second paragraph adds to the tone of the passage, showing the un-attainability of the American Dream. The last paragraph is only one sentence and is also the last sentence in the book. Fitzgerald uses this sentence to show that the “current” is flowing towards the East, and hence corruption. He uses the word “ceaselessly” to describe the movement of time into the past. Nick’s physical movement west is also his movement into the past and traditional values.

Fitzgerald’s word choice affects the mood of the passage in many ways. In the first paragraph, Nick sounds bitter about the un-attainability of Gatsby’s dream. He says that it was “so close that he could hardly fail to grasp it.” This sounds bitter and resentful. Nick then goes on to talk about how the dream that Gatsby strove for was fake and an illusion. He says that what he was really looking for was in the vast Midwest. In the second paragraph he becomes sentimental and dreamy, using ellipses to show how he keeps stretching for the American dream, which is just ahead of him. Nick turns even more sentimental in the third paragraph, saying that he is moving into the past and embracing traditional values in spite of the overwhelming corruption.

The Great Gatsby is dedicated to the theme of the decay and the unattainability of the American dream and the last three paragraphs of the book fully illustrate that theme. 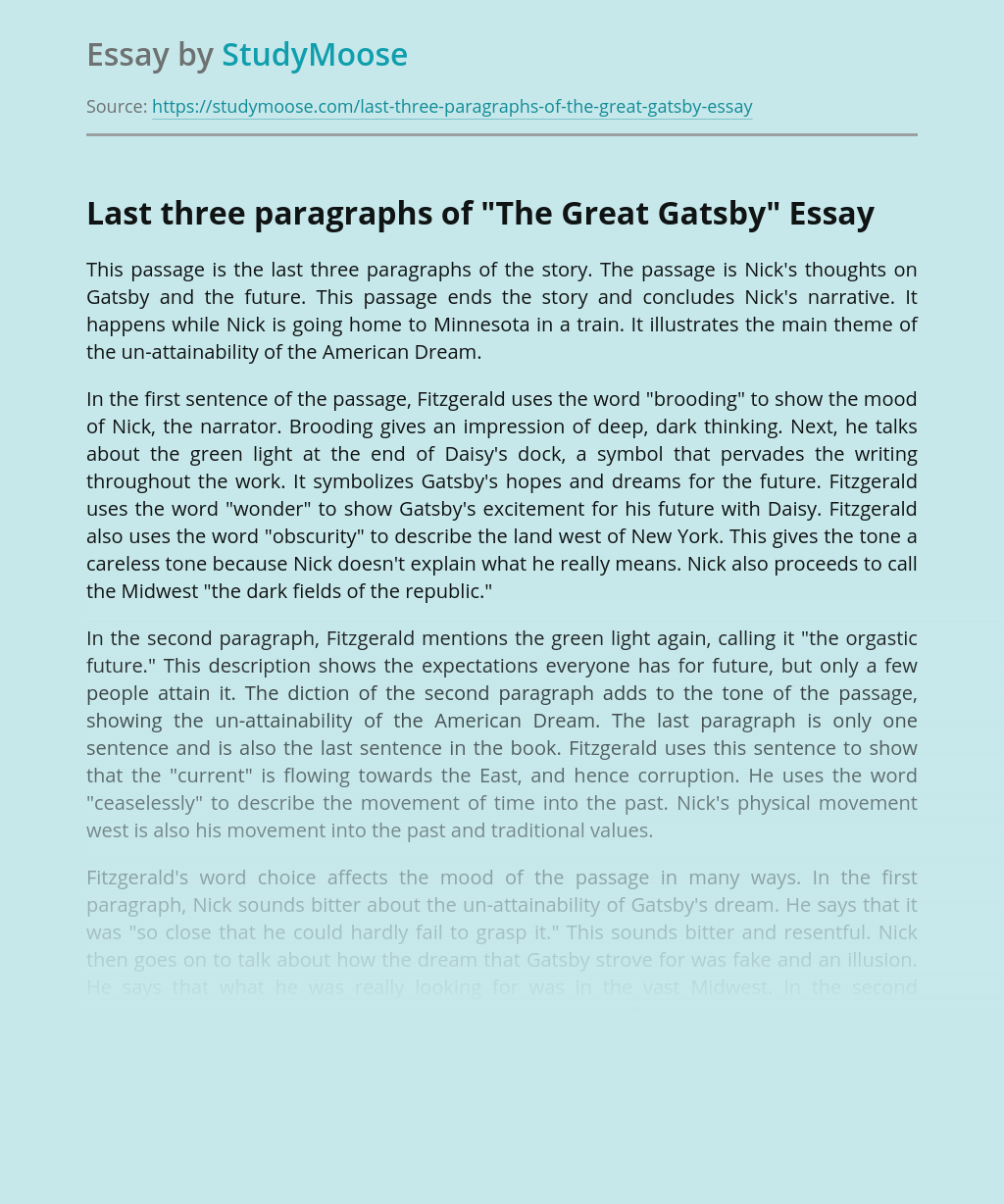 South America is a continent composed of twelve countries and one French colony. The Spanish-speaking countries are: Argentina, Bolivia, Chile, Colombia, Ecuador, Paraguay, Peru, and Venezuela. The former colonies of Guyana and Suriname use English and Dutch, respectively, as their official languages, although many in their populations speak relatively same languages. The same can be...

SUMMARY, CONCLUSION AND RECOMMENDATIONS 5.1 Discussion of Results During this research, we realized that designing a battery optimizer is an exhaustive assignment and can be troublesome since so many updates have been added to the android OS with several applications but a major concern is the battery life of these devices. An increase in the...

Early in 1997, Genzyme Corporation began negotiations with Geltex Pharmaceuticals in an attempt to launch a joint venture to market Geltex’s first product, RenaGel. Geltex was a young biotech research company with only two products in its pipeline, and they didn’t have the resources necessary to launch RenaGel on their own. Genzyme, on the other...

Watching a drama clearly is more effective than reading a drama, and in the same perspective comparing a drama that is watched to a short fiction that is read is undeniably on two different ends of the spectrum. The usefulness of a story that has more meaning within itself than intended on when watching itself...

OBJECTIVE: Objective of our analysis is that we are a bank and we will provide loan to Gul Ahmed because Gul Ahmed has applied for a loan, so we are going to check the credit worthiness of Gul Ahmed by analyzing their financial statements in detail to see whether providing loan to Gul Ahmed will...