“I am one of the few honest people that I have ever known”. Discuss. Nick Carraway, the narrator of the great American novel The Great Gatsby written by F. Scott Fitzgerald, is often heralded as one of the greatest narrators of all time. However, whether Nick was a reliable narrator is an issue that is up for debate, with my personal belief being that Nick was not a reliable narrator, due to his fondness for exaggeration and contradiction, and his obvious idolization of Jay Gatsby.

Turn in your highest-quality paper
Get a qualified writer to help you with
“ Nick as reliable narrator ”
Get high-quality paper
NEW! AI matching with writer

Firstly, Nick is predisposed with a theatrical and exaggerated nature. This is visible from the very quote being discussed in this essay: Nick states that he is “one of the few honest people [he knows]”. This shows clearly how Nick does not put much in store by modesty or restraint or objectivity, even when discussing his self. These theatrics furthermore lead to inconsistencies and further contradictions within the narrative—Nick states at one point that “sometimes [party guests] came and went [to Gatsby’s parties] with a simplicity of heart” but that he, actually, “was invited… the honor would be entirely Gatsby’s… if I would attend his ‘little party’”.

However, it’s seen later on in the narrative that despite Nick’s posturing, Gatsby does not recognize Nick at his own party. This therefore shows how Nick’s theatrical and exaggerated nature occasionally compromises the objectivity of his narrative, and therefore, with his history of being contradictory (as evidenced in the previous paragraph) this therefore shows clearly that Nick’s objectivity is not to be trusted, and that he is an unreliable narrator whose vanity supercedes his honesty.

Furthermore, Nick exhibits his tendency toward contradiction through various points in the text. He states very early off in the text that he’s “inclined to reserve all judgment”, when he, in fact, does nothing but pass (negative) judgment on other people repeatedly throughout the text: he describes George Wilson as “a spiritless man” and Jordan Baker as being “incurably dishonest”, Tom as “pathetic” and Mr McKee as “feminine”. However, Nick lauds himself as being “one of the few honest people [he knows]”—something his clearly judgmental behavior proves him not to be. This, in and of itself, is indicative of Nick’s contradictory nature. The fact that Nick is so given to contradiction therefore casts doubts on whether his narrative is completely trustworthy. It is also important to note that Nick, as a narrator, does not seem to be intentionally malicious in making judgments of other people—these judgments instead seem to integrate themselves effortlessly into the narrative in a way he seems not to notice (except in the case of Gatsby, as will be expounded upon later on in this essay). His contradictory nature kicks in mostly in his expansive descriptions of himself (his tendency toward exaggeration/theater, as explained above), in his describing himself as “honest” and, later, as an esteemed invitee of Gatsby’s party, to name a few examples. This ambiguous contradiction therefore blurs the line between fact and fiction as the reader, led through the story through Nick’s perspective, is caught in the ambiguity of Nick’s judgments and is unable to detach himself to decide whether they are, as unconscious as they seem, truth or scathing fiction.

In other words, the reader is made uncertain if Nick’s contradictory narrative is purely a result of his exaggeration and his conceit, or whether a grain of truth lies in his judgments. Therefore, we can see how Nick’s contradictory nature and his tendency toward ambiguity clearly makes Nick Carraway not an unbiased and objective narrator who is reliable in any way. Finally, Nick is an unreliable narrator due to his obvious partiality toward Gatsby. Nick states clearly at one point that “[Gatsby] represents everything for which [he has] an unaffected scorn”, and repeatedly expresses his good opinion of Gatsby through favorable descriptions of him and his actions (“elegant young rough-neck”). He also opens the novel with a line that seems to beg the reader’s good opinion of Gatsby, beseeching the reader to “remember that all the people in the world haven’t had the advantages that you’ve had”.

This impartiality is evident throughout the text, where Nick will repeatedly disregard right and wrong or the feelings of others to benefit Gatsby: as evidenced by his assisting Gatsby with getting into Daisy’s favor. This shows clearly the extent of Nick’s dedication to Gatsby, and the degrees to which Nick will go to protect him. This obvious and unflagging dedication to Gatsby therefore forces the reader to see the story through Nick’s eyes of idolatry. Where the more ambiguous and offhand contradictions may at least provide the reader space to speculate, it is almost impossible to imagine a story without Gatsby as how Nick portrays him: a tragic, righteous hero—and thus we can see that, in narrating Gatsby’s story, Nick Carraway cannot be an objective narrator. Therefore we can see how, through various intervals in the text, Nick Carraway is actually not an unbiased and “honest” narrator as he is influenced variedly by his contradictory and theatrical nature, as well as his obvious idolization of Gatsby. 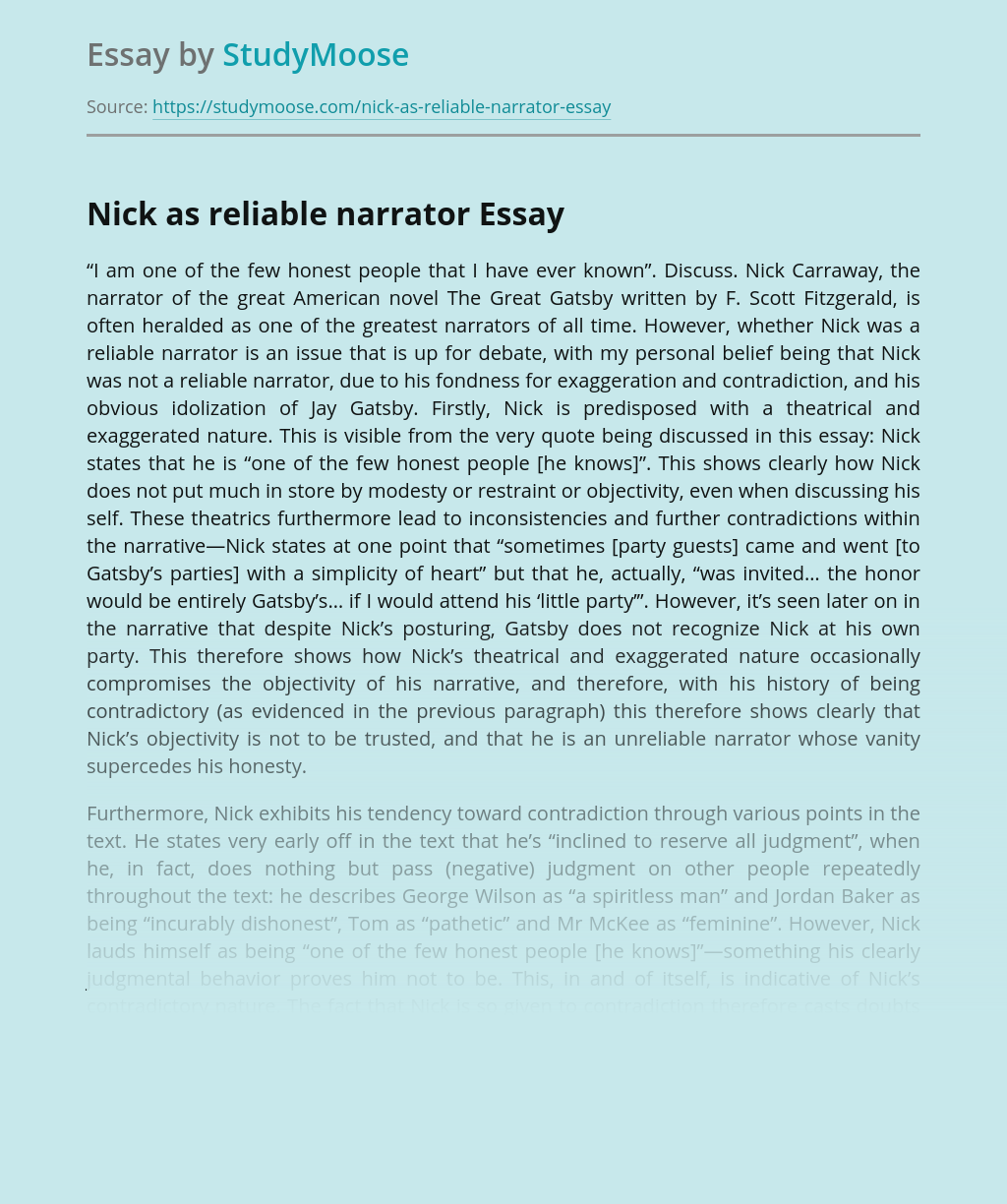 Turn in your highest-quality paper
Get a qualified writer to help you with
“ Nick as reliable narrator ”
Get high-quality paper
Helping students since 2015
Stay Safe, Stay Original