The case has to do with a negotiation with a competitor to buy Pakistani prunes in order to use them to save lives. In fact, being a world leader of genetic modification procedures, I need Pakistani prunes to work on individuals. However, my direct rival requires Pakistani prunes too and we have to discover an offer before the day after.

The result has actually been purchasing fifty-fifty in the short-term. In fact, we consented to share the limited resources on the short term, and then discover another contract 5 years after since each 5 years there are lots of modifications thanks to advance of investigates etc.

Turn in your highest-quality paper
Get a qualified writer to help you with
“ Negotiation Report Pakistani Prunes ”
Get high-quality paper
NEW! AI matching with writer

we chose throughout the auction to provide 2 millions as our first deal, and to make our maximum as 4 millions. I believed that it was a bargain due to the fact that we might each save great deals of lives and keep an excellent track record. Nevertheless, Dr Sanchez and I stated me how much we were able to spend, and at this minute I ought to have understand that I had far more power than Dr Sanchez which possibly I would have the ability to buy a little more prunes than him in order to have a benefit.

This result is lastly not as satisfactory as it could be since I understood that I had far more money to invest and I might be able to be much more efficient. However, in this scenario that was an integrative negotiation scenario, the finest thing could be to comply in order to both win at the end.

So the outcome is satisfying even if it might be better for me if I chose to complete and take all the prunes however that was not fair in my opinion since we were defending the same cause.

We first discussed about the cause we were defending, about why do we need the fruit, what we are doing with. We discussed about the fact that we both need prunes to save lives so we play on emotions of the other party. Then, I said that maybe it could be a good idea to share in order to keep our good reputation and that we are complementary organization and for that reason maybe it could be better to both continue our activities than to compete and fail to save some lives. Then, before finding an agreement to how much we will each buy, Dr Sanchez told me how much he was able to spend on the prunes. At this time, he asked me to do fifty-fifty, I agreed on that statement because I thought that he will spend all his money and I will save some if I need it in the future. The other issue was to agree on a short term and a long-term agreement because thanks to researches and progress, things are changing each five years. So we agreed on a fifty-fifty share in the sort term but we also signed to review our agreement in few years, depending on the progress and changes. My strategy was firstly to try to know more about the other party’s ambitions, goals, strategy etc. Dr Sanchez told me a lot about what he wanted to do with prunes, how much he wanted to spend, what he wanted in the short term and long-term since the beginning of the discussion so I decided to trust what he said to me, even if I was maybe wrong doing that, I had the feeling that he was trustful, he was open to me and didn’t seem to lie. His strategy was to expose the all situation in order to obtain the maximum he could have from me. I think he knew that he had a really limited budget and that the best thing would be to cooperate and not to compete. The critical moments has been firstly the moment when he told how much he had to spend on it because he gave me an important information, the second one has been when I learnt about his goals because I could analyse the long-term and short-term strategies we had to use and I was able to identify that we had the same goals, we were acting for the same cause and we had positive feelings so this situation could be an integrative situation so a “win-win” situation, and the last one has been the agreements we agreed on.

This case was very interesting and has been very important for me because I did some mistakes but thanks to thank I learnt a lot about negotiation and integrative negotiation situation. The first mistake has been when we identified the interests. In fact, I didn’t realise that we were not interested in the same part of the prune, if I realised that, we would be able to maximize our profits. So we fail in identifying our interests. However, the good thing is that we had the same goal (save lives), and we were trustful in each other. Since the beginning we had positive feelings towards each other so each of us told the trust and we wanted to share, cooperate and help each other because we directly saw that cooperate will be better than compete if we wanted to act together for the same and good
cause. In my opinion, the best skill I applied during this case was to identify the positive feelings there were between us, and the emotions we exchanged about the causes we defended. However, I have to be careful about feelings and truth because maybe, the other party could be much more dishonest and I could loose everything. The most important thing I learnt is that cooperating could be a very good deal in this kind of cases when it concern health, people’s safety etc. because we can do much more positive things when we are two than when we are alone. However, I have to keep in mind, even if I did well by sharing and cooperating, that we failed by identifying that we didn’t need the same part of the fruit, and that is a shame because we will be able to save half of the lives we could be able to do!! 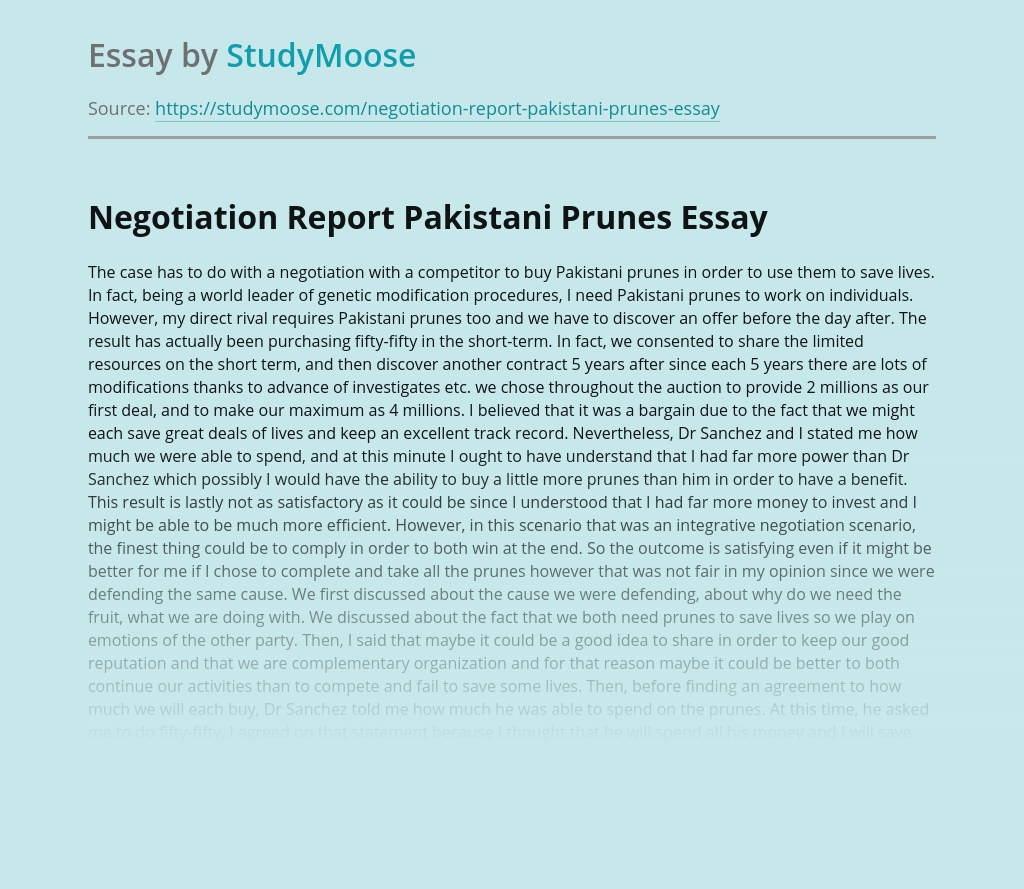 Turn in your highest-quality paper
Get a qualified writer to help you with
“ Negotiation Report Pakistani Prunes ”
Get high-quality paper
Helping students since 2015
Stay Safe, Stay Original