Natural Selection through Competition and Isolation of Species

The struggle for life results in differences in form which Darwin called “incipient species. ” Darwin says that variations, no matter how small or big they are, will necessarily be passed down to offsprings because they will tend to make those individuals survive. He called this process natural selection to relate it to man’s ability to select objects in their lives. Herbert Spencer, an English philosopher, had previously described the struggle for life as the “survival of the fittest,” which Darwin though was also appropriate for the process of evolution that goes on among organisms.

Don't use plagiarized sources. Get your custom essay on
“ Natural Selection through Competition and Isolation of Species ”
Get custom paper
NEW! smart matching with writer

Competition is constantly happening between organisms because of the rate of population increase. This leads into a Malthusian struggle that eliminates the nonadaptive individuals from the group (Cuvier et al. , 2003, p. 20). The divergence in the forms of species may result from changes in living conditions. Darwin pointed out that some species may be wiped out because of the immigration of other groups more adapted to the environment where they live in.

Man-induced selection practiced by breeders of animals often results in sharp cases of divergence within species, although this is also possible through natural processes (Cuvier et al. , 2003, p. 24). Some experts point out that Darwin anticipated the concept of “ecological niche” because he suggested that all individuals who survive in the environment were not necessarily higher or better. They just have their own features that made them better adapted to the environment. According to Darwin, natural selection is facilitated by the isolation or seclusion of a population of organisms.

Its pace can also quicken if the species is composed of a large population in open areas, since this indicates that there are many variations within the group (Cuvier et al. , 2003, p. 26). Darwin measured and described the divergence in species through a tree diagram with branches that stopped or fell off while extinction happens. New buds also spring from the tree to symbolize new species, leading to Darwin call it the “tree of life. ” Heredity in Darwin’s Theory of Natural Selection Evolution had already been discussed before Darwin’s theory was published.

Darwin only added substance to the science of evolution by proposing the idea of natural selection as a tool of evolution. Despite the soundness of his theory however, it was still difficult to form a coherent story of the evolution of organisms because there was no acceptable model or standard of heredity to explain natural selection. In fact, Darwin admits that the laws of heredity are still unclear (Endler & Endler, 1986, p. 36). Since there was no guiding standard for heredity, Darwin borrowed Lamarck’s idea of acquired characteristics through use and disuse.

He believed that when animals regularly use certain parts of their body, those parts become stronger or larger. In contrast, disuse results in certain parts being weaker or decreasing in size. These acquired characteristics are then passed on to newer generations either through domestication or through nature. While use and disuse had some role in evolution, Darwin said that some developments in the characteristics of animals, such as the loss of wings of some insects, might have resulted from natural selection.

Natural Selection through Competition and Isolation of Species. (2017, Jan 08). Retrieved from https://studymoose.com/natural-selection-through-competition-and-isolation-of-species-essay 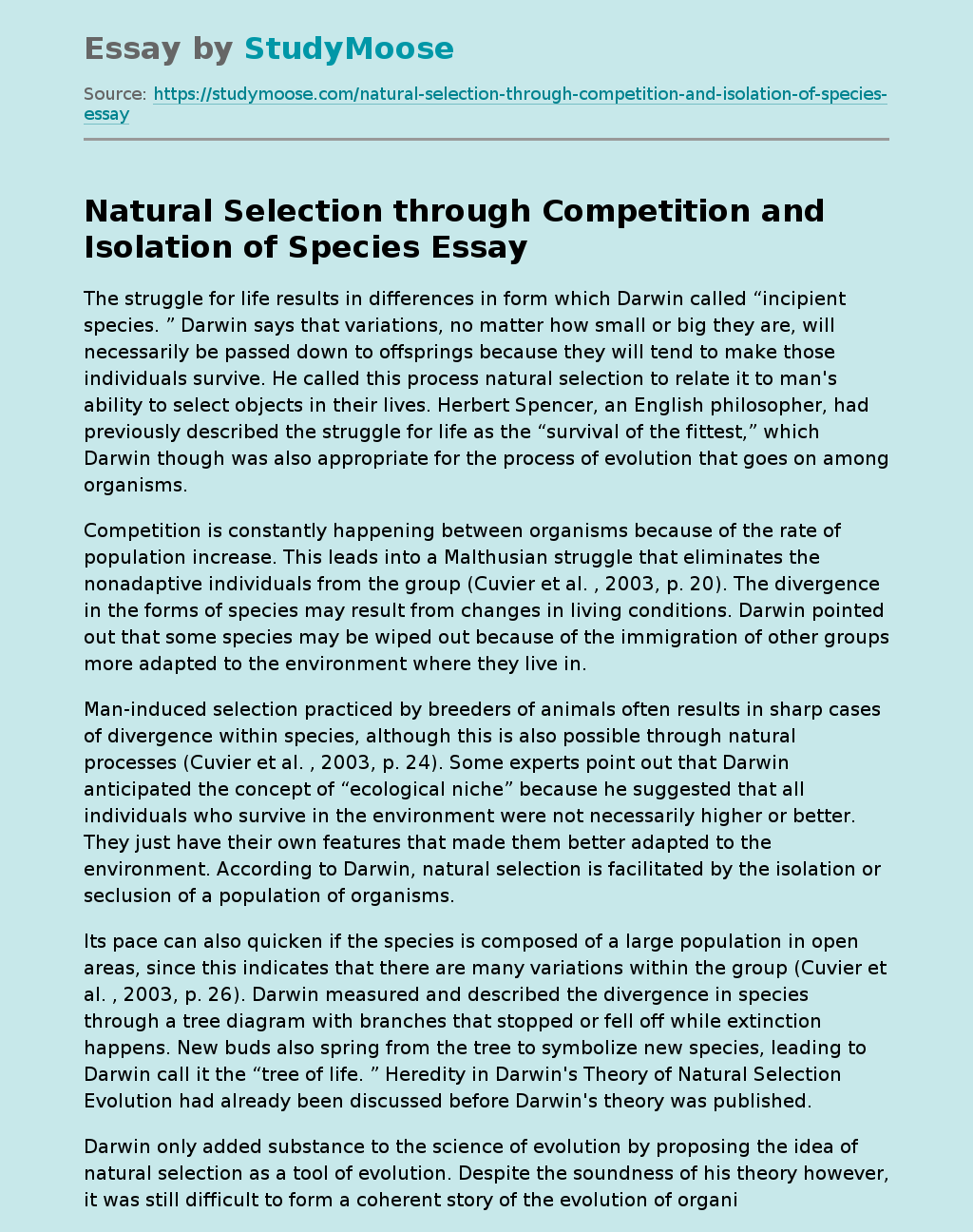