Tropical forests include dense rainforests, where rainfall is abundant year-round; seasonally moist forests, where rainfall is abundant, but seasonal; and drier, more open woodlands. Tropical forests of all varieties are disappearing rapidly as humans clear the natural landscape for construction, to build roads and urban areas and make room farms and pastures (Lindsey, 2007). Although deforestation meets some of the human needs, it also has profound, sometimes devastating, consequences, including extinction of flora and fauna, social conflict, and climate change, challenges that are not just local, but global.

Turn in your highest-quality paper
Get a qualified writer to help you with
“ Deforestation Extinction Of Species Conclusion ”
Get high-quality paper
NEW! AI matching with writers

At the current rate of deforestation, the world’s rain forest may completely vanish in the next century (Lindsey, 2007).

Jungle burned for agriculture in southern Mexico.
(By Jami Dwyer via Wikimedia Commons)

Deforestation has many negative effects on the environment. The most dramatic impact is a loss of habitat for millions of species. Seventy percent of Earth’s land animals and plants live in forests, and many cannot survive the deforestation that destroys their homes (National Geographic, 2015).

The forests are the home to a large number of animals; trees are also an important component of the water cycle (Bose, 2012). The roots of trees hold the soil together and prevent soil erosion. Deforestation at such alarming rate has been a cause of constant worries for environmentalists the world over (Bose, 2012).

In some developing countries, massive deforestation is on-going and shaping climate and geography (Science daily, 2015).

Deforestation may lead to a lot of causes, ranging from slow forest degradation to sudden and catastrophic wildfires. Deforestation results from removal of trees without sufficient reforestation; however, even with reforestation, significant biodiversity loss may occur Moreover, deforestation also alters the hydrologic cycle, the moisture in the atmosphere and the amount of water in the soil and groundwater (Science daily, 2015).

Deforestation in indigenous territories by loggers, colonizers, and refugees has sometimes triggered violent conflict (Lindsey, 2007). Forest preservation can be socially divisive, as well. International and national governments and aid agencies struggle with questions about what level of human presence, if any, is compatible with conservation goals in tropical forests, how to balance the needs of indigenous peoples with expanding rural populations and national economic development, and whether establishing large, pristine, uninhabited protected areas—even if that means removing current residents—should be the highest priority of conservation efforts in tropical forests (Lindsey, 2007).

There are a few reasons which cause deforestation; one of the biggest drivers of deforestation is conversion to cropland and pasture, mostly for subsistence, which is growing crops or raising livestock to meet daily needs. Farmers cut forests to provide more spaces for grazing livestock and planting crops. The conversion to agricultural land usually results from multiple direct factors. For instance, countries build roads and railway expansion into remote areas to improve overland transportation of goods. The road development itself causes a limited amount of deforestation (Lindsey, 2007). When loggers have harvested an area’s valuable timber, they will continue to harvest more. The roads and the logged areas become a magnet for settlers, farmers and ranchers who slash and burn the remaining forest for cropland or cattle pasture, completing the deforestation chain that began with road building (Lindsey, 2007).

In other cases, forests that have been degraded by logging become fire-prone and are eventually deforested by repeated accidental fires from adjacent farms or pastures (Lindsey, 2007). Wildfires and slash and burn agriculture release carbon dioxide that would otherwise be stored in the forest biomass into the atmosphere. Forest regrowth and crops recapture some carbon, but overall, deforestation is a source of atmospheric carbon dioxide and therefore a contributor to global warming. In the Amazon alone, scientists estimate that the trees contain more carbon than 10 years’ worth of human-produced greenhouse gases (Lindsey, 2007). When people clear the forests, usually with fire, carbon stored in the wood returns back to the atmosphere, enhancing the greenhouse effect and global warming.

Once the forest is cleared for crop or grazing land, the soils can become a large source of carbon emissions. In places such as Indonesia, the soils of swampy lowland forests are rich in partially decayed organic matter, known as peat (Lindsey, 2007). During extended droughts, such as during El Niño events (large-scale ocean-atmosphere climate interaction linked to a periodic warming in sea surface temperatures across the central and east-central Equatorial Pacific), (National Ocean Service, 2014) the forests and the peat become flammable, especially if they have been degraded by logging or accidental fire. When they burn, they release huge volumes of carbon dioxide and other greenhouse gases (Lindsey, 2007).

It is not certain whether intact tropical forests are a net source or sink of carbon. Certainly, the trunks of trees are a large, stable pool of carbon that grows as forests mature or regenerate on previously cleared land. But trees, plants, and microorganisms in the soil also respire, releasing carbon dioxide as they break down carbohydrates for energy. In the Amazon, huge volumes of carbon dioxide escape from decaying leaves and other organic matter in rivers and streams that flood large areas of forest during the rainy season (Lindsey, 2007).

The variety and interdependence of all living things has led to the evolution of world. Man has been killing animals’ right since the time he acquired the skill of hunting (Bose, 2012). Although in those times, hunting was the means for survival, human beings continued to kill animals even after they had learned to cultivate crops. The relentless hunting by human beings, sometimes for the hide of a cheetah or the tusks of the elephants, or simply to cook the tasty shark fin soup, has wiped out the existence of a large number of animals in just a century (Bose, 2012). Besides hunting, human activities like deforestation and environmental pollution has led to the extinction of a large number of animals and plants due to loss of their habitats.

Since prehistoric times, humans have used the earth’s resources to enrich their own lives. However, there is a point when the resources are being overexploited, and this exploitation begins to threaten the existence of other species. Over exploitation presents itself in many forms: exhausting a species as a supply of food or hunting a species for trophies, clothing, medicine or souvenir. In the aquatic biomes, overfishing is a worldwide manifestation of over-exploitation (Hogan, 2014).

In the case of terrestrial ecosystems, overgrazing and intensive cropping systems are the chief elements of over-exploitation. Hunting for trophy or medicinal extracts comprises smaller biomass destruction, but is specifically targeted at some of the most threatened fauna of the planet (Hogan, 2014). These practices are generally overtly mercenary, rather than being motivated by subsistence or hunger, as most of the farming exploitation. For example, tigers have been an integral part of traditional Chinese medicine for over 1000 years and as such, they have been hunted to the brink of extinction as a product of the lucrative trade in tiger body parts (Hogan, 2014).

Base on this picture, these are the modern biotic extracts store in Hong Kong, China. Certain of these products represent trade in organisms that are endangered species. http://www.eoearth.org/view/article/150962/

Pollution is the introduction of potentially harmful chemical or physical constituents into the environment, which substances substantially harm individual species metabolisms, or which strongly and rapidly alter a stable historic ecosystem composition (Hogan, 2014). This introduction usually enters the atmosphere, soil or natural water systems of the Earth. Widespread air pollutants are sulphur dioxide, carbon monoxide, and oxides of nitrogen. Water and soil pollutants of concern are heavy metals and a large category of pesticide and herbicide compounds (Hogan, 2014).

Chemical pollutants may interfere with metabolic functions, causing functional impairment or death of organisms. Reductions in species numbers anywhere within a given food chain, of course, have ramifications to other members of the ecosystem (Hogan, 2014). Pollution is often a contributing factor along with habitat degradation in extinction processes. Here are some species that have all gone extinct in the past two centuries.

The Quagga (Equus quagga ssp. quagga) was a subspecies of the common plains zebra and a native of South Africa. Known for its unique stripes, the Quagga was hunted for its hide and killed by ranchers who believed the animals competed with livestock for grazing area. The last known Quagga died at the Amsterdam Zoo in 1883 (Gerken, 2013).

Known as Tasmanian tigers due to their stripes, thylacines (Thylacinus cynocephalus) were the largest modern carnivorous marsupial according to the Smithsonian Institution (Gerken, 2013). They once existed across the Australian continent, but their habitat had been reduced to the island of Tasmania by the time European settlers arrived (Gerken, 2013).Thylacines were believed to kill livestock and were often shot and trapped. They were a convenient scapegoat for poor financial returns and high stock losses at a time of rural depression in Tasmania according to the National Museum of Australia (Gerken, 2013).

The Tecopa pupfish (Cyprinodon nevadensis calidae) was native to the Mojave desert in California and could survive in waters as warm as 108 degrees Fahrenheit (Gerken, 2013). Human development around the Tecopa Hot Springs in the mid-20th century and the channelling of two springs together left the habitat unsuitable for the small fish. The Tecopa pupfish became extinct by 1970 or soon after (Gerken, 2013).

“Earth provides enough to satisfy every man’s needs, but not every man’s greed.”- Mahatma Gandhi. It is widely recognised that we are hugely overspending our current budget of natural resources. At the existing rates of exploitation, there is no way for the environment to recover in good time and save it for our future generation.

Everything on our mother earth is interconnected, and while the nature supplies us with valuable environmental services. Without any of it, we cannot exist. We depend on each other’s action and the way we treat natural resources.

We should adopt a holistic view of nature. It is not an entity that exists separately from us; we are an inalienable part of nature and we should care for it in the most appropriate manner. This is the only way we possibly solve the problem of environmental pollution.

The only key to save our beloved Mother Earth has been wandering with us from the very beginning. It has been silently drifting, waiting for someone to discover its dominating power. 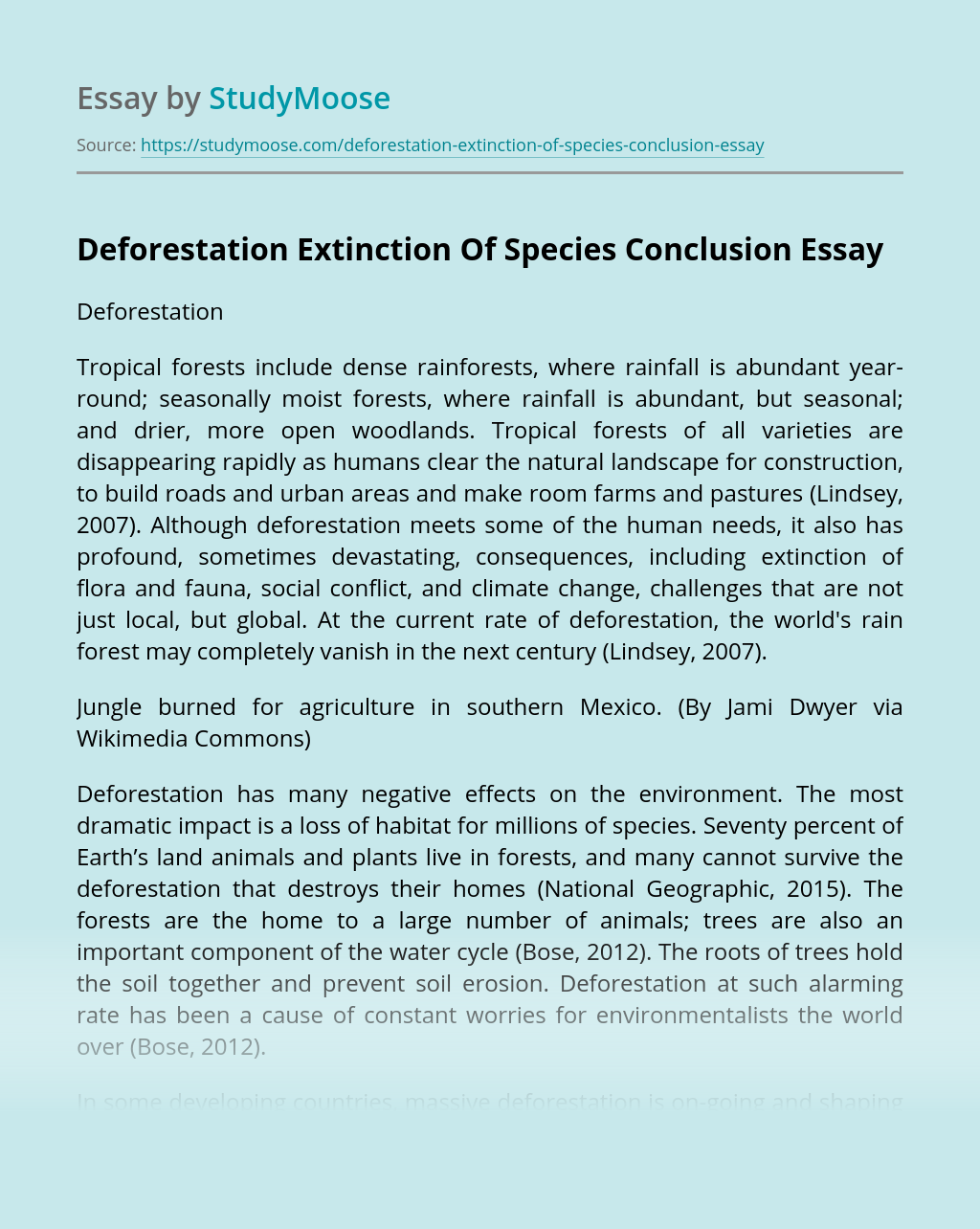 Turn in your highest-quality paper
Get a qualified writer to help you with
“ Deforestation Extinction Of Species Conclusion ”
Get high-quality paper
Helping students since 2015
Stay Safe, Stay Original