The Era of Good Feeling: The Effects and Consequences of Nationalism and Sectionalism In 1815, shortly before the start of James Monroe’s presidency and after the War of 1812, a historical period known as the “Era of Good Feeling” commenced in America. However, though the name of this age alone insinuated a time of unity and prosperity within the nation, sectionalism became an unequivocal dilemma that seeped through the government’s attempts in promoting nationalism, and ultimately divided the country. The Era of Good Feeling was a time where only one political party reigned, sense of unity prevailed, and national pride was evident within the citizens.

Don't use plagiarized sources. Get your custom essay on
“ Nationalism And Sectionalism ”
Get custom paper
NEW! smart matching with writer

This post­war nationalism fueled the country to work towards a common goal, and even encouraged creation of traditions that would be passed down generations.

The McCulloch v. Maryland case in 1819 exhibits government’s attempt in putting up a unified front to further promote nationalism. In this case, the Congress’ power is questioned when the ruling prevented states from outlawing or taxing the national bank, as Maryland tried to do.

The document states, “The power of the general government, it has been said, are delegated by the states, who alone are truly sovereign” (Document 4). However, the outcome of the case only came to show that the federal government had more power compared to the state government, and thus portrayed a stronger, unified system. In Document 3, people are portrayed to be celebrating Independence Day on the fourth of July within the same year of the case. This depicts the effect that national pride had, bringing together multiple races, genders, social classes, and age groups to celebrate the country’s independence.

Furthermore, this era also brought forth a fundamental period in America known

as the Industrial Revolution. This introduced market economy to the population and transitioned America to manufacturing processes that brought economic benefits to the north. Market economy not only changed the way people worked, but also the way they lived, as it divided labor, based work in factories, and opened new markets like the American Fur Company. Due to the prior Embargo Act, merchants also invested in national local manufacturing, and thus allowed for the rapid development of urban districts and increase in population. It brought wealth to the North’s market­based economy but contradicted with the South’s focus on an agricultural economy that depended on slaves.

One of the most significant developments within the country was introduced shortly after the War of 1812, by politician Henry Clay, as the American System. The plan promoted a system in which the South was seen to be the producer of raw goods, North for the manufacturing, while the West as the breadbasket of the country. It consisted of three parts: the development of canals, road systems and railroads, creation of a protective tariff, and the reinstating of the Bank of U.S..

The North prospered from the creation of the tariff as it helped develop the manufacturing economy. The West, on the other hand, benefitted from the creation of road and canal system, a plan supported by John C. Calhoun, in order to prevent disunion within the rapidly growing country, (Document 2). These developments in transportation allowed for easier distribution of goods, thus benefitting them as well. However, the protective tariff prevented the South’s economy from growing, thus leading to an evident economic gap between the North and the South, as the former’s economy started to boom due to the increase in manufacturing. 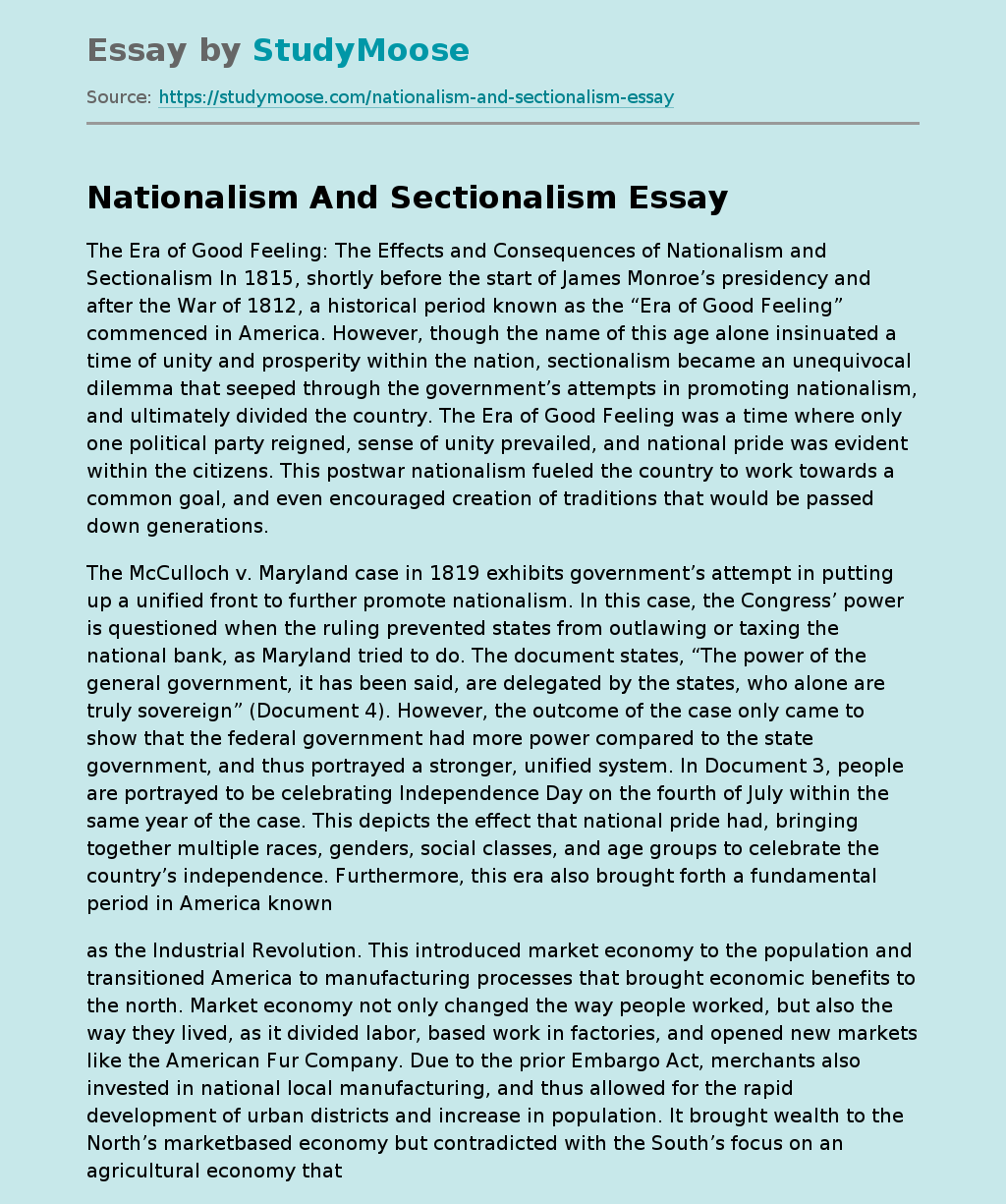