Mythological Tale From the Boat of Stories

My name is Shalini tayal and I am a story teller. Today I bring to you a mythological tale from the boat of stories. Have you visited the beautiful mountain range that runs across the northern borders of India, the Himalayas? According to the Hindu mythology, in the snowy caves of the Himalayas, on the Mount Kailasa, lived, Lord Shiva and Goddess Parvathi and here was born their son, Ganesha. Lord Ganesha sports a trunk, a pot belly and four arms.

Don't use plagiarized sources. Get your custom essay on
“ Mythological Tale From the Boat of Stories ”
Get custom paper
NEW! smart matching with writer

His divine vehicle is, surprisingly, a mouse!

But Ganesha was not born with an elephant head. Let us find out what happened in this fascinating story “Birth of Ganesha”

Lord Shiva was married to Parvati, the beautiful daughter of Himavan, the king of the mountains. He often went into the forests to meditate and practice Yoga. Parvati spent her time weaving flowery garlands, talking to birds and animals and dancing amongst the lotuses. But she often felt lonely.

One morning she went deep into the cave with sparkling water flowing through it.

She applied turmeric and Chandan paste all over her body. Then, as she sat down and scrubbed her body, she felt as if someone was peeping into the cave. She got very upset. She collected the sandalwood and turmeric that had fallen off her body and molded a doll in the form of a chubby little boy. She chanted some mantras and gently blew life into the doll. Wonder of wonders, there sat in front of her a beautiful young boy with chubby cheeks, dimpled chin, curly long hair and shining black eyes.

The boy giggled and Parvati joy knew no bounds. She gave a stick to the boy, kissed him and said, ” I am now going to finish my bath. Stand guard at the entrance of the cave and don’t let anyone enter. I will treat you to sweet modaks later on. In the meantime, Lord Shiva returned to Mount Kailasa, looking fierce and wild, draped in a tiger skin with Vasuki, the king of snakes wrapped around his neck and the crescent moon glinting in his tumbled hair.

He came looking for Parvati to the cave only to be stopped at the entrance by a little boy holding a stick.

“Stop”, commanded the boy taking Shiva by surprise. Shiva tried to push the boy aside but the boy stuck Shiva on his chest with his stick. Shiva was enraged but he went away because he did not want to fight with a mere boy. Shiva sent his army of Ganas led by Nandi, Shiva’s bull, to teach the boy a lesson. A great battle ensued but soon the Ganas were pushed back by the brave and fearless boy. They went running back to Lord Shiva who got more enraged.

Shiva then called Lord Indra and asked him to take his army of Devas and remove the boy from the cave entrance. The valiant little boy was attacked from all sides but he pushed away the army of Devas and stood resolutely guarding the cave.

This further provoked Lord Shiva who angrily threw his mighty Trident and chopped off the little boy’s head. A silence fell on the three worlds. Just then Parvati came out from her bath to find an angry Shiva standing over the headless body of her son. Her fury knew no bounds. She lashed out at Shiva and threatened to destroy the entire universe as a consequence of his actions. Now, the universe was the responsibility of Bramha, Vishnu, and Shiva. Brahma witnessed the wrath of Parvati and apologized on behalf of Shiva to her, advising her to not destroy the universe. Parvati relented on the conditions that her son be brought back to life. Shiva, too, realized the mistake he committed in his rage and apologized to Parvati. He then directed his troops to go North and get the head of the creature that crosses their path. The Ganas headed North and found a single tusked elephant lying in their path. They ran back to Shiva carrying the elephant’s head who then placed it over the boy’s body and brought him to life amongst chanting of sacred Mantras by the Gods in the heaven.

Shiva then blessed him and made him the Lord of his divine team or Ganas. This earned him the name Ganapati or Ganesha, the Lord of the Ganas. Ganesha then turned to his mother and said, “Mother, I’m hungry”. Parvati ran into kitchen and quickly made modaks and brought him a plateful which he happily sat and ate while Shiva, Parvati and the Ganas stood watching him lovingly.

Mythological Tale From the Boat of Stories. (2019, Dec 06). Retrieved from https://studymoose.com/mythological-tale-from-the-boat-of-stories-essay 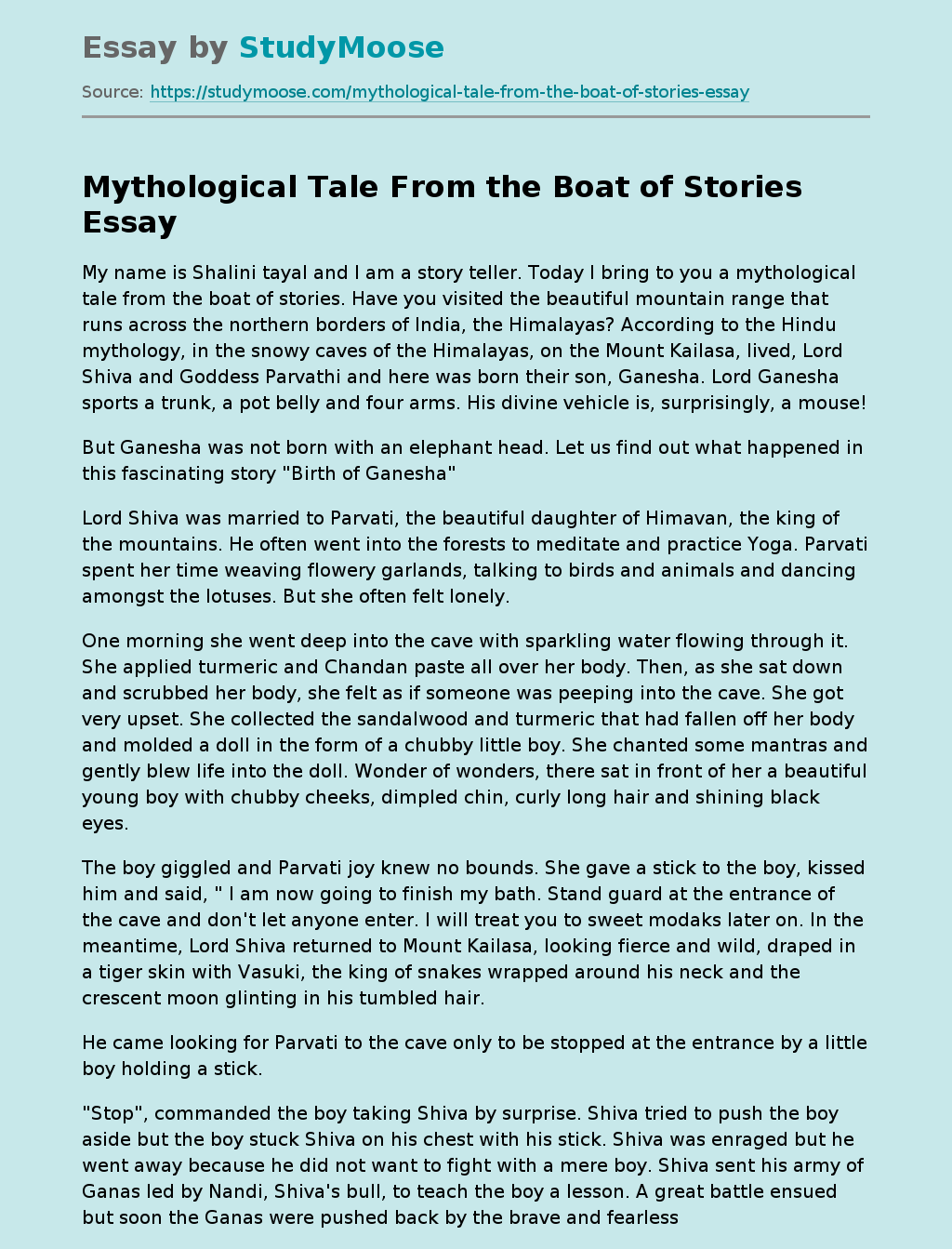