Hero myths are the best-known mythological stories because they involve colossal characters that are easily recognizable. In ancient Greece heroes such as Homer’s Odysseus, Apollo, and Achilles are “super heroes.” In modern day literature and pop culture mythological characters like those found in comic books are the equivalent. Super heroes and their stories involve characters that put themselves in harm’s way to protect something or someone else. Whether it is ancient Greek mythology one is studying or modern day comic book characters, the theme, and meaning are the same.

Don't use plagiarized sources. Get your custom essay on
“ Mythological Heroes Comparison ”
Get custom paper
NEW! smart matching with writer

In other words, “the story they tell belongs to us all” (Powell, 1990, p. 8). A modern day super hero who protects his society while maintaining a tremendous persona is Batman, created by Bill Finger in 1940. Batman does not possess the typical deity powers of ancient hero mythological characters, but he does embark on a quest to save Gotham City from crime and corruption while exhibiting characteristics common in his mythological hero counterparts.

Like Homer’s Odysseus, Batman exudes mythological deity characteristics, including strength, courage, and selflessness. Batman is today what Homer’s Odysseus is to ancient Greece. He embodies what mythological characters stand for during the times of ancient Greece, “but stand for something more, something that crosses boundaries” (Rohac, n.d., p. 1). He also lives in Gotham City, which is a place any person can see him or herself living in, which helps to reinforce the mythological idea behind the super hero. In afterlife mythology, when Odysseus visits the Land of the Dead, he does so exuding his heroic quality of strength.

Like Batman, Odysseus requires strength, not in the physical sense, but the emotional and mental sense because “the Land of the Dead is a place marked by emptiness and despair” (Powell, 1990, p. 67) that only a heroic man can encounter on his epic journey. Batman has grown up in Gotham City and following his father’s death the city is in the tight grips of crime again and under the control of a powerful gang called ‘the mutants’ (Reynolds, 1992).

Comparison of Odysseus and Batman

Gotham City is like that of an afterlife because it is devoid of law and order. Like Odysseus, Batman requires the mental and emotional strength to confront each of the various mutants he takes down. Another common trait that mythological heroes Odysseus and Batman possess is courage. By definition of what these men do, courage runs through their bloodstreams as air and hormones. For Odysseus there mere fact that he leaves Ithaca for 12 years to fight in Troy is courageous. He leaves behind the heir to the throne and his son, Telemachus, who was born shortly after Odysseus left for the Trojan War (Nelson, 2008). No ordinary man would be able to leave behind his family and people to face war. This is the type of action that commands courage of a brave man. Although Batman may not be fighting a war like the Trojan War that involves daunting voyages at sea for weeks on end, he does face criminals and thugs who are attacking Gotham City.

Batman learned to be courageous from his mentor Rā’s Al Ghul who warned Batman, “you lack the courage to do all that is necessary. If someone stands in the way of true justice, you simply walk up behind him and stab him in the heart” (Nolan & Goyer, 2006, p. 125). Batman decides at the birth of his alter ego to take on the crime in Gotham City without the use of lethal force. He punishes the crooks and gangs by working around legislation. Batman’s decision to avoid lethal force is an act of courage because it is easy to kill the enemy, but it is another to incapacitate temporarily the enemy that may return to face him on his journey to keep Gotham City safe. Finally Batman and Odysseus embark on their quests as selfless acts to accomplish a specific goal. Odysseus sets out to be a part of the Trojan War despite wanting nothing more than to “achieve his goal of returning home to Ithaca” (Powell, 1990, p. 295). Soldiers who enter battle are brave and selfless because they put their own lives on the line to protect what belongs to them. In a similar vein, Batman works during the night to rid Gotham City of the thugs who take over the city.

Though it can be argued Batman is anything but selfless because his work as Batman is in an attempt to avenge his father’s death by one of the very street gangs he battles, Batman does what he does in attempt to make his city a safer, better place to live, much like the men and women on the frontlines of the battlefield, or a hero like Odysseus. In conclusion, the modern day super hero who protects his society while maintaining an immense persona and the hero from ancient Greece who sets out on an epic quest possess qualities that mark each as strong, courageous, and selfless individuals. These are qualities super heroes possess that society has come to expect from the classic hero. As the hero battles to keep their home territory safe, it is important to bear in mind “the context of the universal struggle between order and chaos” (Powell, 1990, p. 8) stands to be a timeless test for society in general. 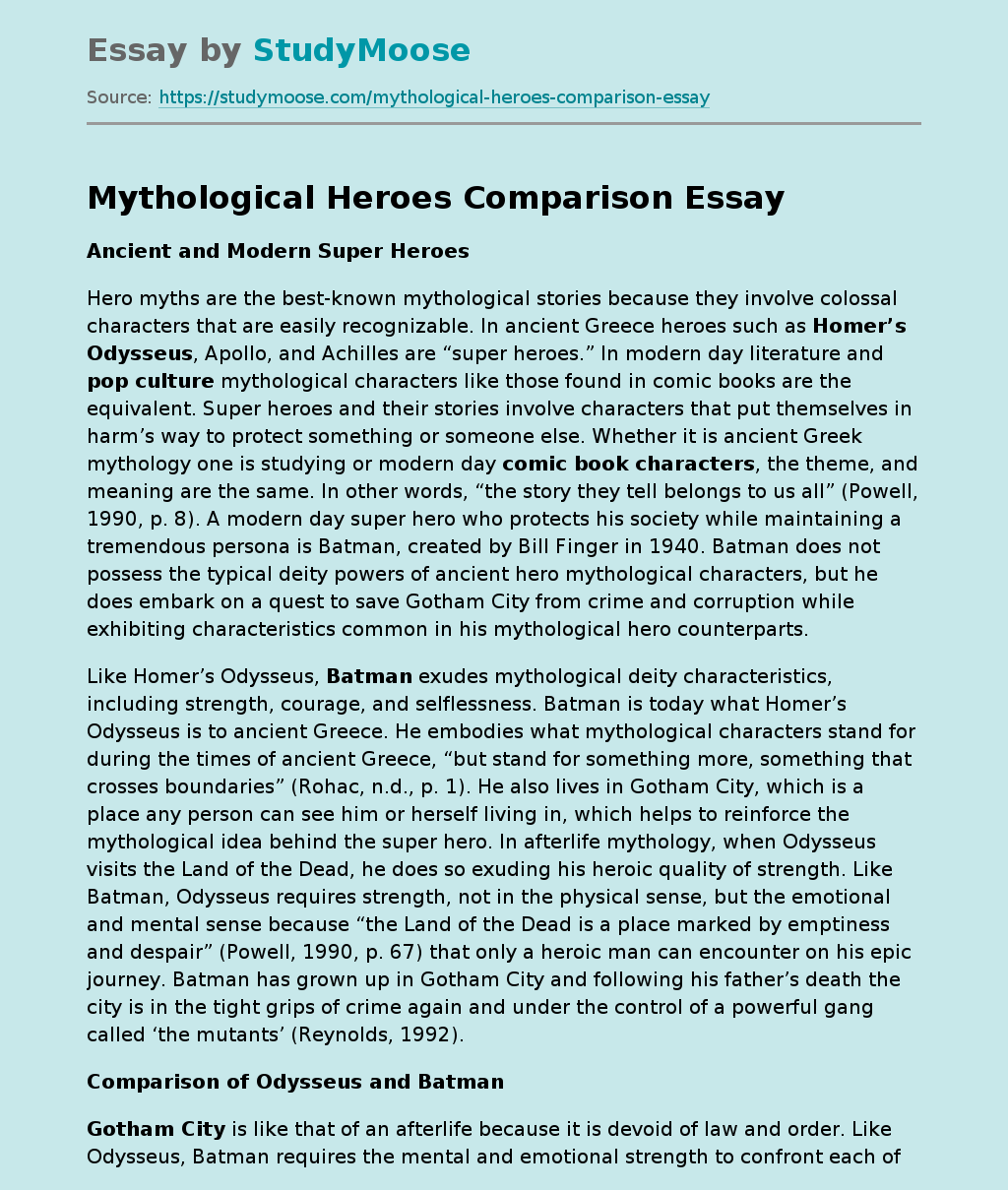