My Neighbor Totoro (??????? , Tonari no Totoro) is a Japanese animated fantasy film written and directed by Hayao Miyazaki and produced by Studio Ghibli. Two young girls, Satsuki and her younger sister Mei, move into a house in the country with their father to be closer to their hospitalized mother who is recovering from an illness. Satsuki and Mei discover that the nearby forest is inhabited by magical creatures called Totoros (pronounced toe-toe-ro).

The Totoros appear in different sizes, one is small and white, the next one slightly bigger and blue coloured, the biggest one being grey in colour; which features on the movie’s cover being the most well known.

Don't use plagiarized sources. Get your custom essay on
“ My Neighbour Totoro [Film History Essay] ”
Get custom paper
NEW! smart matching with writer

They have been described by critics as “giant chubby ferrets” but there isn’t really any completely apt description to describe a Totoro, for they are made-up creatures. Satsuki and Mei soon befriend these Totoros, and have several magical adventures. When trouble occurs, their new friends will help them rediscover hope and help when dealing with their mother’s sickness and settling into a new home.

The voice acting cast consists of 3 different voices for each version of “My Neighbour Totoro” that was released. There was the original japanese version, the Streamline English dubbed version, then finally an english dubbed version by Disney. The original japanese voice actors were Noriko Hidaka as “Satsuki”, Chika Sakamoto as “Mei”, Shigesato Itoi as the “father”, Sumi Shimamoto as the “mother”, Tanie Kitabayashi as “Granny”, Toshiyuki Amagasa as “Kanta”, Naoki Tatsuta as the “catbus”, and Hitoshi Takagi as the grey Totoro.

The film is set in rural post-war Japan, made in 1988. Some notable anime films made around this time were “Grave of the Fireflies (1988)” an anti-war movie, as well as “Akira (1988)”; a cyberpunk anime movie, based in “Neo-Tokyo”, a booming, industrial city with the ambiance of a society on the edge of collapse. “My Neighbour Totoro” is a rather significant movie because it was so successful and loved by japanese children like “Winnie the Pooh” is loved by british children and more popular than Mickey Mouse could ever hope to be.

This was because of the charismatic simplicity of the Totoros and their somewhat “cute” and “cuddly” appearance. The soundtrack for “My Neighbour Totoro” composed by Joe Hisaishi and Azumi Inoue received much high praise and added to the straightforward atmosphere of the film. One of the more popular themes from the soundtrack is “Path of the Wind (?????? )”. Totoro has become well known in international pop culture as it was indeed a notable film for its particular genre, later becoming the logo and symbol for Studio Ghibli.

The film won the Animage Anime Grand Prix prize and the Mainichi Film Award for Best Film in 1988, as well as numerous other awards. My Neighbor Totoro ranked #41 in Empire magazines “The 100 Best Films Of World Cinema” in 2010. Although the target audience for “My Neighbour Totoro” is aimed at children, this 90 minute movie is bound to appeal to to anyone, even if they’re not an anime fan.

Dearly loved and critically regarded worldwide, the magical My Neighbor Totoro is a heart-warming tale of innocence and the power of belief that will delight viewers of all ages. The story is uncomplicated and easy to watch, and the undeniable charm of the characters also adds to the realistic atmosphere of this Studio Ghibli movie. Despite its release date, the animation is solid, just like the fitting soundtrack. My Neighbor Totoro is an anime that gained mainstreamed recognition and popularity for good reason. 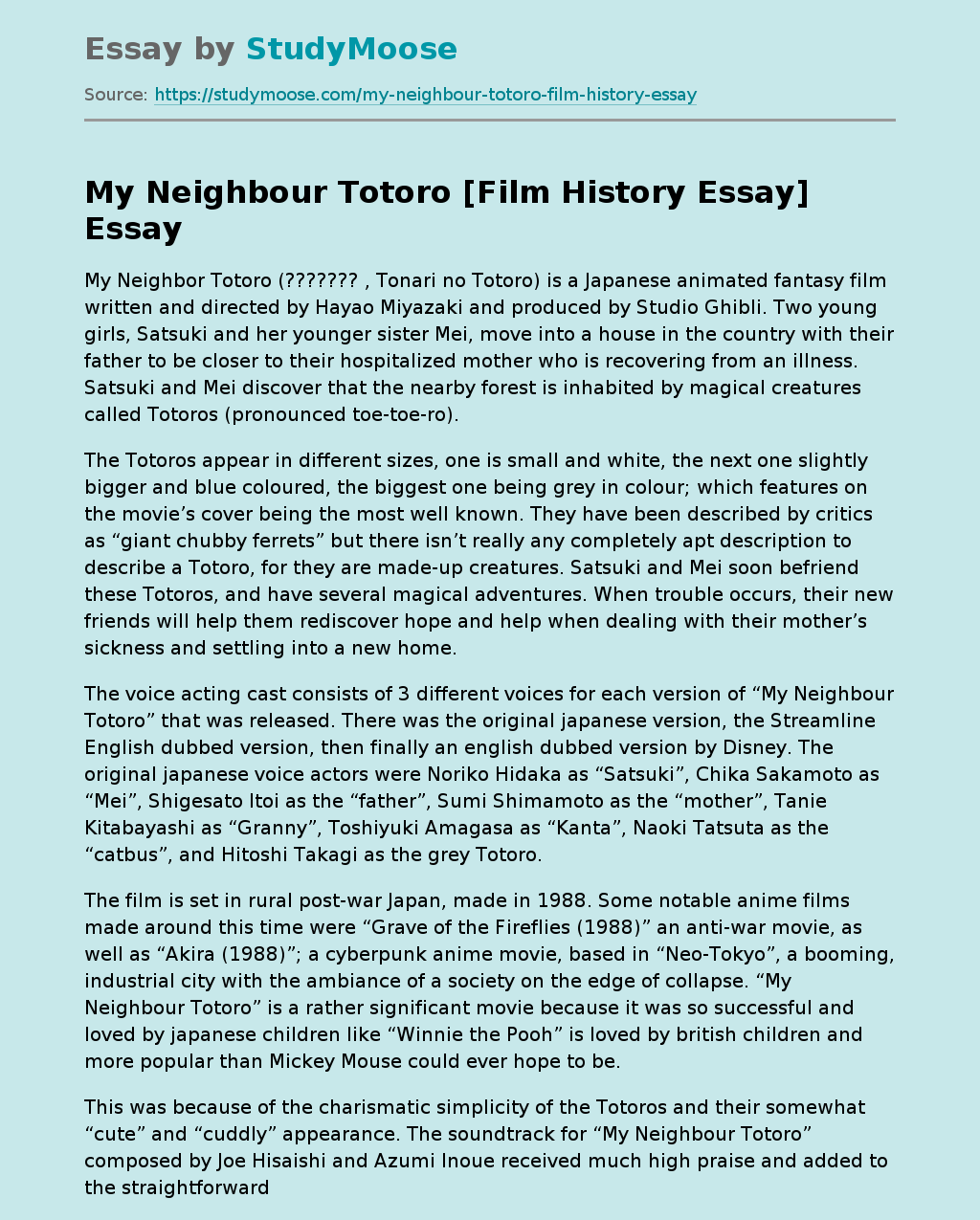