My Favourite Cartoon: The Value of Social Satire In Rick and Mortie

Watching your favorite cartoon show, listening to music, looking at paintings, having a conversation with someone or even yourself. Satire’s are in our everyday language, whether we know it or not. Satire is the humor, irony, exaggeration, or ridicule to expose and criticize people’s stupidity or vices, particularly in the context of contemporary politics and other topical issues. Satire only works when the audience knows the serious context as well as the satirical context. Satire relies on an audience’s familiarity with the setting, medium, or context.

Don't use plagiarized sources. Get your custom essay on
“ My Favourite Cartoon: The Value of Social Satire In Rick and Mortie ”
Get custom paper
NEW! smart matching with writer

They have been around since 7th-century B.C.E dedicated to social or literary criticism through the use of comedy.

One of my favorite cartoons right now that display satire on every episode is Rick and Morty. Rick and Morty is an American television series that premiered on December 2, 2013 on cartoon network. Throughout the four seasons, each episode displayed satire. Rick and Morty are dedicated to mocking classic Sci-tropes such as time travel, love potions, and reality wrapping.

You have two main characters in the show, Rick, who is the genius scientific grandpa who thinks he is above science but is a man of science who thinks everybody is an idiot. He is an alcoholic that drinks every episode while saying something off the wall.

Then you have the second important character, Morty. Morty is your stereotypical teenager, who thinks about pretty girls all day and tries to graduate high school without knowing how the world works. Throughout the season you can catch Rick and Morty saying satire such as “Okay, well, sometimes science is more art than science Morty, a lot of people don’t realize that” or “Quantum carburetor? Jesus, Morty, you can’t just add a sci-fi word to a car word and hope it means something” and I remember this episode because Rick was drunk and was going on a rant about Morty being stupid.

In one-episode Rick and Summer visit, a world ruled by women pointing out that women are the ruler of the world and without us men are doomed.

And this show fits perfectly with the painting Hogarth’s Marriage a la Mode. Because both families are toxic to each other and each character fits the descriptions in the painting. The wife and husband in the painting would be Jerry and Beth since they are both going through marriage problems and want to divorce each other but do not want to hurt the kids. Rick would be the man on the left since they both want a higher social position, with Rick only wanting to take over space. And Morty would be the son with syphilis since in every episode something always happening to him.

In the show and the painting satires simply reflect on something that will always exist. Social changes the satirists wanted in the 18th century was through observation and sharp nimbleness of thought exposed the superficial follies and corruption of society. You can see it clearly in the painting and in the show, which is why satires are going to be around for a long time sticking to political issues and other topical issues.

My Favourite Cartoon: The Value of Social Satire In Rick and Mortie. (2021, Mar 15). Retrieved from https://studymoose.com/my-favourite-cartoon-the-value-of-social-satire-in-rick-and-mortie-essay 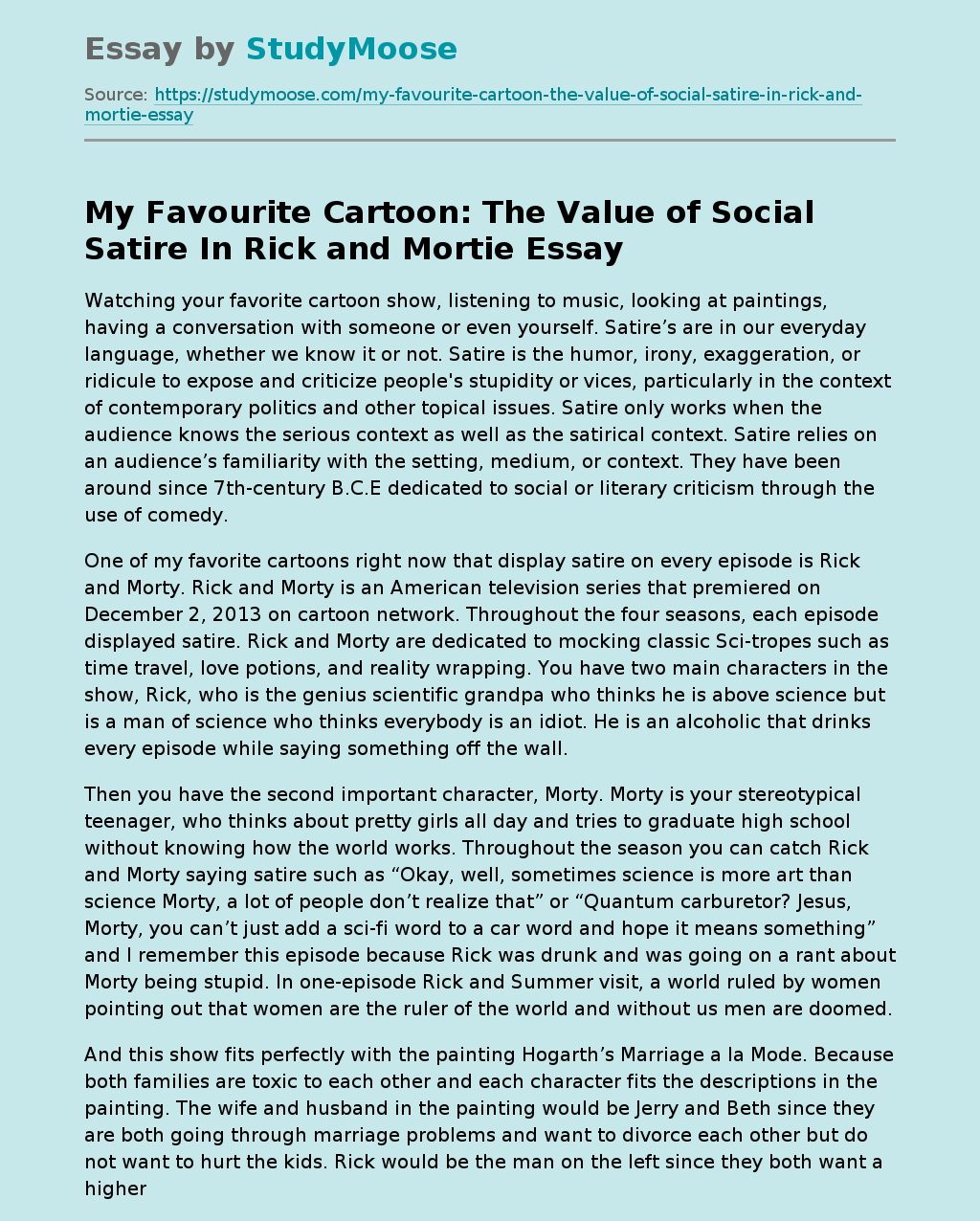