Zendaya Maree Stoermer Coleman is an amazing actor, singer, and dancer. Did you know that Zendaya name means to “give thanks”? A quote that Zendaya lives by is “The best thing is to realize that you are who you are and you gotta work with what you got”. Some of her favorite things are… food- burritos, Sport- basketball, dessert- coffee ice cream, pet- dog, favorite singer- Michael Jackson, and her favorite color is pink. These are just a couple facts to introduce you to a very confident, determined, passionate girl named Zendaya Maree Stoermer Coleman.

Don't use plagiarized sources. Get your custom essay on
“ My Favorite Singer: Zendaya Coleman ”
Get custom paper
NEW! smart matching with writer

Zendaya was born on September 1, 1996. She grew up in Oakland, California. Zendaya’s father( Kazembe Ajamu Coleman) was a stage manager when she was younger, so she got a lot of practice for the inspiring things she is doing now. When she was younger she was in a dance group called “Future Shock Oakland”. She did multiple dances with them. Also, she danced as a hip hop dancer and hula dancer when she was eight.

When she was eleven she became a vegetarian because she just loved animals to much to eat them. She was also a child model and backup dancer. She also grew up with 5 siblings. She has 3 sisters named Kaylee, Katianna, and AnnaBella Stoermer Coleman. Also she has 2 brothers named Austin and Julien Stoermer Coleman.

Zendaya had started her career when she was a backup dancer and model and then started in a TV show called “Shake It Up” which she did from 2010- 2013.

From then on she had started to do more TV shows and movies. For example, she had played roles in “Good Luck Charlie”, “Prank Stars”, “A.N.T. Farm”, and “ K.C Undercover”. She also danced in a show called “Dancing with the Stars” in 2013. Also in 2013 she became an author of the book called “ Between U and Me”. The year before that she signed off on a recording deal with Hollywood Records. Another one of her many successes is that in 2017 she played a role in the movie called “ The Greatest Showman”. She is still continuing to make and create movies/ TV shows. 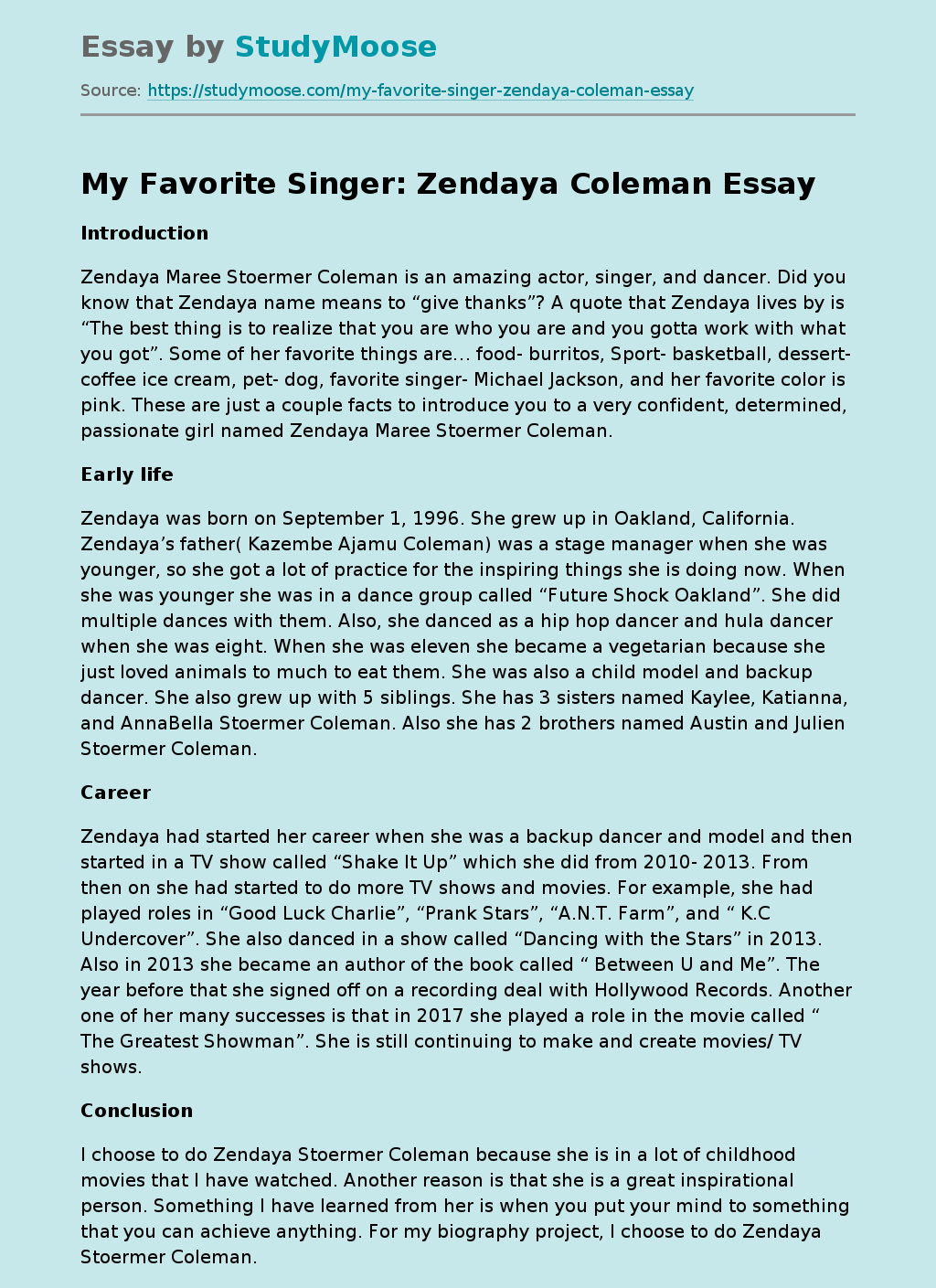