My Best Friend, the Homeless Man

Buddha once said, “Instead of judging a man by his appearance, look inside their heart, and read what it is their soul wrote. ” I was raised in a family, which at times, could be very judgmental of people. My family lived in an upper-class neighborhood where there was no poverty or homelessness. My parents made sure my brother and I had all the best clothes, the newest cell phones and laptops, they spent a lot of money sending us to the best schools on the east coast, our education was very important to them.

Don't use plagiarized sources. Get your custom essay on
“ My Best Friend, the Homeless Man ”
Get custom paper
NEW! smart matching with writer

We both had tutors for different subjects, and my parents required us to take lessons three times a week, on the instrument of our choice. As it would turn out though, the greatest lesson I have ever learned, and the greatest friendship I have ever known, would come from a homeless man and his dog. Although I didn’t know it when I met him, knowing Brent would give me something more valuable than any earthly possession, it would make me a better person.

The summer following my senior year of high school was a hectic confusing time in my life.

I went from living in a small quiet suburban neighborhood in New Jersey my whole life, to moving to a big, noisy city in Arizona, 3000 miles away from home. It was my first time being on my own away from my family, especially in a place so far from where I lived my whole life. I went from having my parents taking care of me my whole life, to suddenly having to take care of myself.

I’ll never forget how hot it was, summers in New Jersey rarely ever reach over 95 degrees, and that is only on the hottest days of the year. Unlike New Jersey, the first summer I spent in Arizona reached over 125 degrees.

It was one of those excruciatingly hot days the day that I met Brent. August was coming to an end, and school was about to start. I had orientation all day and I was exhausted. On my way home from orientation, I realized I needed cigarettes, and since I didn’t know my way around the area very well I stopped at the first place I saw. It was a little liquor store on the corner of 31st Avenue. I pulled into the parking lot and parked my car, that was the first time I saw them. A homeless man was sitting on the curb outside the store, his dog sprawled out nearby in a more shaded area of the parking lot.

The dog seemed to be in better shape than its master was. She was a healthy red-nose pit bull, with a beautiful, full coat of fur. The man on the other hand looked dirty like he hadn’t showered in weeks. His clothes were filthy, as was his matted hair, and he looked like he hadn’t eaten in just about as long as he hadn’t showered. As I passed the pit bull to go into the store I noticed that she was wearing shoes on both her back paws. I would later find out that she had been paralyzed in both hind legs during a procedure to get her fixed. Without those special shoes, she would not have been able to walk at all.

While I was in the store buying my merchandise, I thought to myself how hot it was outside. I wondered to myself when the last time the dog had eaten was. The homeless, dirty looking man, didn’t look like he had any money to feed himself, never mind his dog, so I bought some dog food and chips for them. I remember thinking to myself, “What kind of person lives like that? Who would ever be out in public looking so filthy? ” I knew nothing about this man, yet I judged him at the time, on appearance alone. As I paid for my items I was feeling a little nervous about approaching the man.

He was homeless after all, and I didn’t want to get robbed. When I returned outside to give the homeless man the food I had bought for him, his dog approached me and wagged her tail. He thanked me, and threw the can of dog food I had just bought to the dog. To my surprise she picked up the can, and carrying it in her mouth, she walked back to her spot in the shade. I introduced myself, and told him I was new to the area, he said his name was Brent, and the red-nose pit bull was Little Girl. We said our good-byes, and I started on my walk back to my apartment. Since I was new in Arizona, I didn’t know anyone.

I felt really lonely and depressed a lot of the time, and I desperately missed home. Over the next six months, I would see Brent and Little girl almost every day on my walk home from school. I would stop and say hi frequently. Our conversations became longer and longer as the months went on, and eventually Brent became my best friend. I found out that he was in the Navy for 8 years before he got hurt overseas. He started to drink a lot after his injury, and that is why he was homeless, he couldn’t stop drinking. He was from back east like I was; his only family in Arizona was Little Girl.

I was right about one thing when I met him, he took better care of her then he did himself. We talked about everything and anything for hours, sometimes he would come over and shower and eat, although he didn’t like to do that too much, he had too much pride. I trusted him, and he never did anything to betray that trust. He always encouraged me to stay in school. He would tell me to stay on the right course in life, because one day you’ll wake up, and you’re not 21 anymore, your old, and you haven’t accomplished even half of what you set out to accomplish so many years before.

I had the privilege of having Brent and Little Girl in my life for three wonderful years. A couple weeks before Easter, in 2011, Brent caught pneumonia. I called 911 when I saw how sick he was getting, and they took him to the hospital. I sat with him all that night. Brent slipped into a coma early the next morning, and two days after Easter, he was gone. Little Girl passed away only a week after her best friend. Even though I lost the best friend I have ever known, I am thankful for the lessons Brent and Little girl taught me. Never now is there a time I see a homeless man and judge him by his look, I started instead to judge one’s soul.

My Best Friend, the Homeless Man. (2016, Sep 10). Retrieved from https://studymoose.com/my-best-friend-the-homeless-man-essay 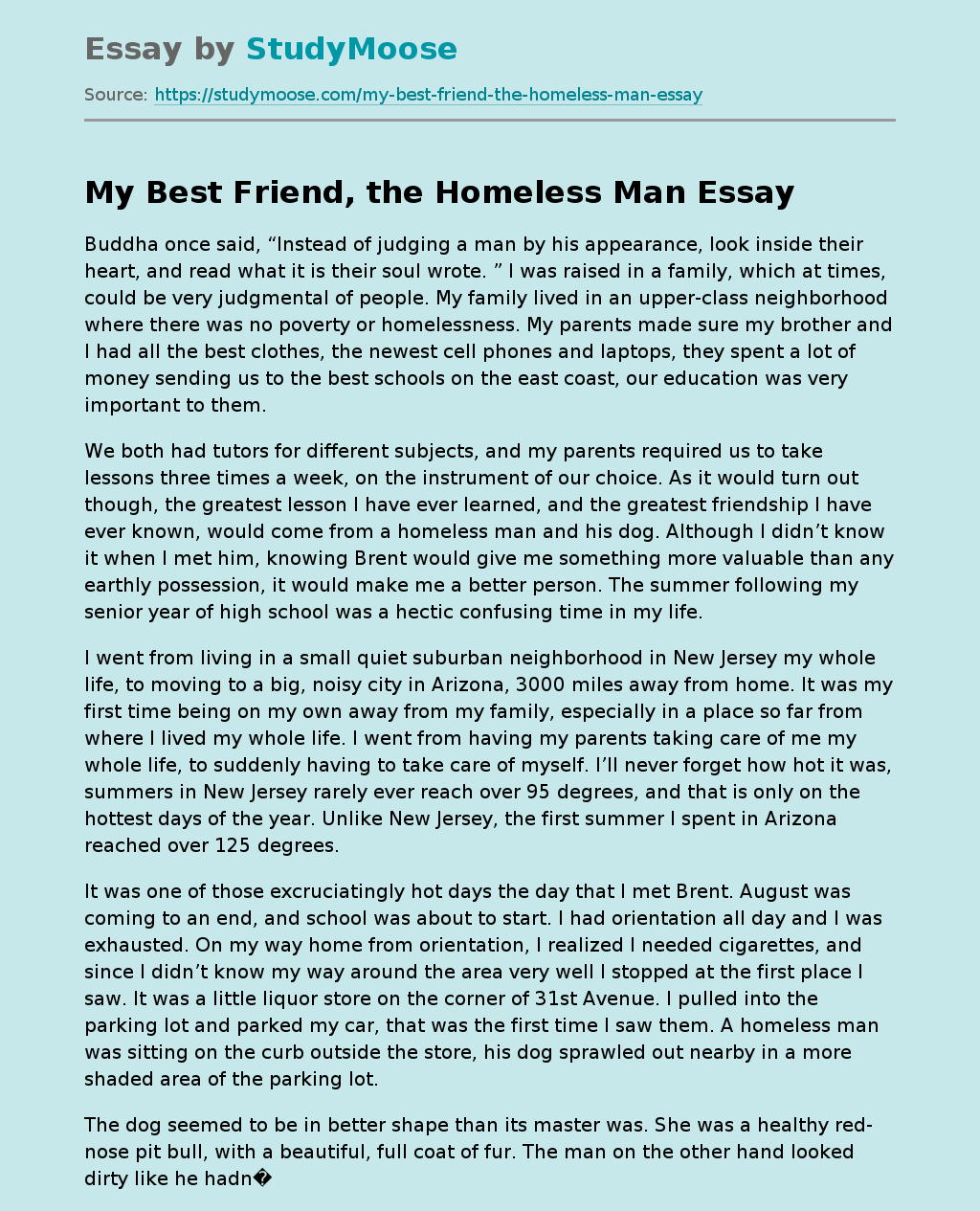