A multi-user operating system lets more that one user work on a mainframe computer at the same time.

Don't use plagiarized sources.
Get Your Custom Essay on Multi User Operating Systems Just from $13,9/Page

Features of a MUOS

· Using resource sharing in a multi-user operating system allocates the CPU time of the mainframe computer between the different users. Each user in turn is given a small time slice of the CPU time. Because these time slices are very small the users believe that they are all using the mainframe at the same time. Resource sharing also lets users share peripherals such as printers or hard drives and also lets users share files on a network.

· Multi-tasking lets the operating system run more than one program at a time. One example of a multi tasking could be editing a word document while browsing the Internet. The way this is done is by the processor using time slicing.

· Background processing is a term which means when commands are not processed straight away but rather executed “in the background”, often while other programs are interfacing with the system in real time.

· In a distributed system, to the user it appears to be a single computer system but in fact is made up from a number of different host computers, which are connected together. This is completely hidden from the user. All decisions about what computer each user will connect to would be taken by the distributed system’s operating system. Each individual host within such a distributed could be any type of computer at all.

· Time sliced systems split each users time of use of the system to fairly allocate each user a fair amount of time of use. These time slices are so small that it appears to the user that their programs are running continuously when in fact the CPU is jumping from user to user. Each time slice is milliseconds long so each user is actually given several time slices every second. The more each user tries to do the slower their programs will run as their time slice has to split between their different tasks.

Main Components of a MUOS

There are many components that are needed to run a multi user operating system. These include the processor, memory, data storage devices, terminals and input/output devices.

· The processor, also known as CPU or central processing unit In terms of computing power, the CPU is the most important element of a computer system. The CPU is the brains of the computer. Sometimes referred to simply as the processor or central processor, the CPU is where most calculations take place. On large machines, CPUs require one or more printed circuit boards. On personal computers and small workstations, the CPU is housed in a single chip called a microprocessor.

· Memory refers to the physical memory that is internal to the computer. Sometimes mistaken for mass storage devices such as hard drives the word ‘main’ is used to differentiate it from this. Memory is usual known as RAM or Random Access Memory. The computer can only manipulate data that is in main memory, therefore, every program that you execute and every file that you access must be copied from a storage device such as a hard drive into main memory. The amount of main memory on a computer is crucial because it determines how many programs can be run at one time and how much data can be readily available to a program.

· There is a couple of data storage devices used in multi user operating systems. The term usually refers to mass storage devices such as hard disk drives or tape drives. Large amounts of data such as the operating system itself and any other programs that are installed on the computer are all kept on such devices so that can be accessed by the RAM and then processed to be used by the user. The main types of storage are: –

o Hard disk drives: The most common type of mass data storage used on a computer because of the large amounts of data which can be held and the speed it can be accessed at.

o Floppy disks: Much slower than hard drives and hold very little data but are easy portable and inexpensive.

o Tapes: Not too expensive and hold large amounts of data but do not permit random access of data.

· There are two main types of terminal used to access multi user operating systems. One is a dumb terminal, which just consists of a computer and a keyboard, but practically no processing power. They allow a user to carry out work on the remote server, minicomputer or mainframe. Smart terminals provide additional resources to perform local editing and simple processing. Basically, smart terminals are low cost PC platforms with no external storage like hard drives booting from a network.

· Input/Output devices refers to devices with allow the user to put data and receive data to and from the computer system. For instance an input device may be a keyboard or a mouse and output devices can be things such as monitors and printers.

Software Components of a MUOS

The main software components of a multi user operating system are the kernel, device handlers, spoolers and the user interface.

· The kernel of an operating system is the most protected and privileged layer of the operating system and acts as a timekeeper and regulator for the system, controlling any time slicing for multi user or multi tasking functions. This ensures fairness in the way resources are allocated and used, and dealing with interrupts having different priorities, which arrive to signal internal and external events.

· A device handler is a small program, which controls a particular type of device connected to a computer. There are device drivers for every hardware component on a computer. If a complex device is added to the machine then a device handler must be added to the operating software because this will contain the code needed to communicate with the device.

· A spooler puts jobs on a queue and takes them off one at a time. Most operating systems come with one or more spoolers, such as a print spooler for spooling documents. In addition, some applications include spoolers. Many word processors, for example, include their own print spooler. A good print spooler should allow you to change the order of documents in the queue and to cancel specific print jobs. Acronym for simultaneous peripheral operations on-line, spooling refers to putting jobs in a buffer, a special area in memory or on a disk where a device can access them when it is ready. Spooling is useful because devices access data at different rates. The buffer provides a waiting station where data can rest while the slower device catches up. 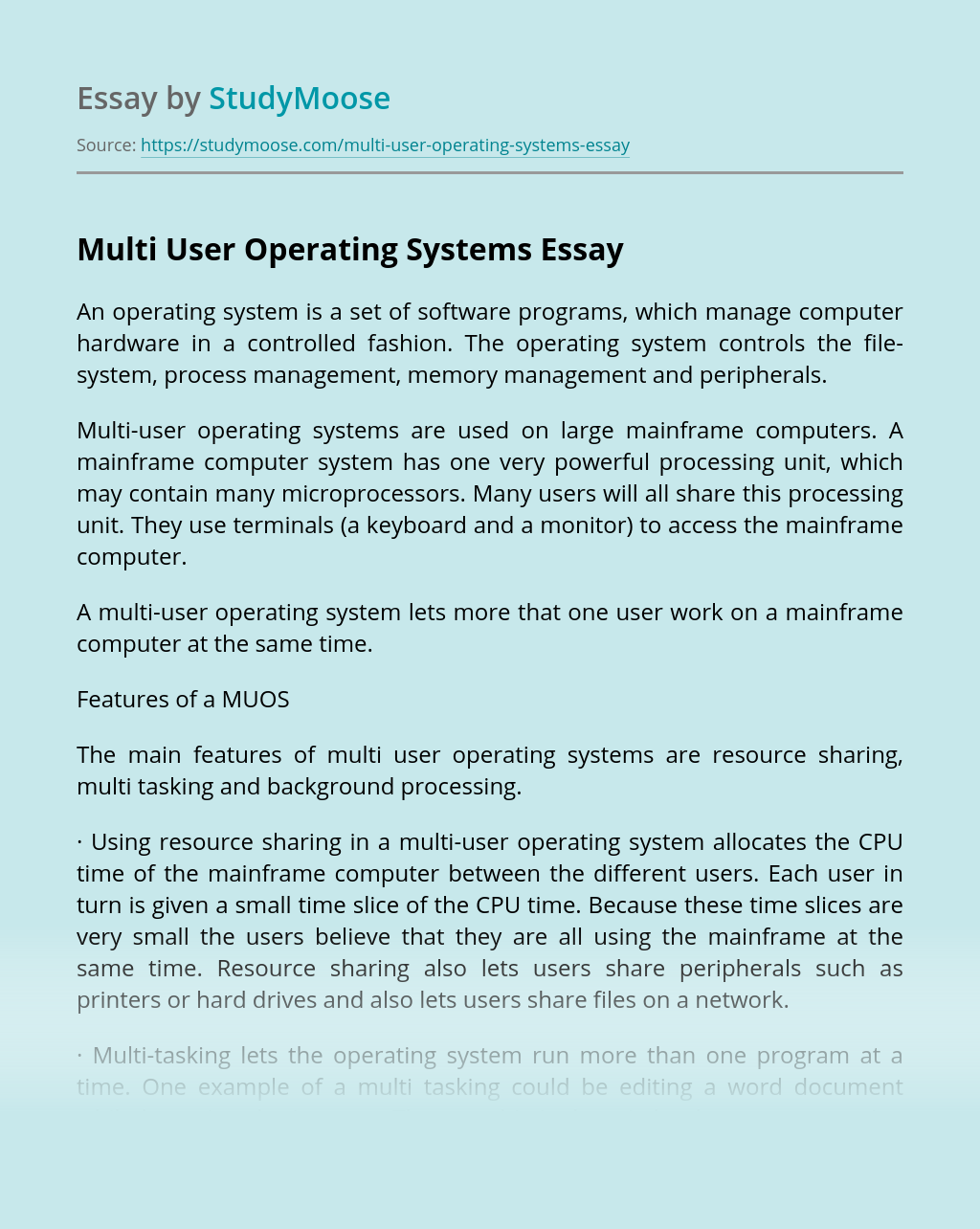 The advantages and disadvantages of a scientific approach

Scientific approach can be defined as the involvement of standards and procedures for demonstrating the empirical warrant of its findings, showing the match or fit between its statements and what is happening or has happened in the world. Scientific approaches to understanding the world can be distinguished from other approaches in two fundamental and irrelevant...

The Armed Forces of the Philippines Transformation Roadmap (AFPTR) are important part of our plan to meet our aspiration to become a world class armed forces. We look to build a strong military, to be fully mission effective, professional, credibly equipped and highly responsive to the technological, doctrine and sociological changes. I believe we can...

Get Essay
Causes and Effect of Poverty

The level of poverty, causes and effects on the Educational sector as well as academic performance of students within the Nigeria is worrisome. Poverty, which forms a specific culture and way of life, is a growing issue in Nigeria. The number of Nigerians living in poverty is continually increasing; hence its effects on students performance....

Analysis of “Moral Minimums for Multinationals” by Thomas Donaldson

In “Moral Minimums for Multinationals” Thomas Donaldson addressed an issue, which often escapes attention of moral philosophers. The article deals with a rather special ethical aspect of international business relations: relations between people of various cultures inside multinational corporations. This problem appears to be of paramount importance for the author, providing data about expansion of...

Ohm’s Law is V = I * R or in some cases I = V / R. The next two laws were established by a German physicist by the name of Gustav Kirchhoff. Kirchhoff’s first law is his voltage law. Kirchhoff’s Voltage Law (KVL) states that around any loop in a circuit, the voltage rises...