Moving to a New Country Essay

People move to an other country for many reasons: to escape from their exausting routine, a career change, health purpose, but for me it was as part of an University exchange. I’m a moroccan student who live in South Korea since August 2012, and I was suprised of some aspects of this country. I had some experiences that bring me to ask myself new questions and even let me confused sometimes. In fact, there are three things that impressed me most: their similarities, their deceptively quiet nature (which create some misunderstanding) and respect according to their own codes.

Don't use plagiarized sources.
Get Your Custom Essay on Moving to a New Country Just from $13,9/Page

When you just come to South Korea, when the excitement of a new experience is past, you get surprised by the homogeneity of Koreans. In this country, everyone is literally alike: physically (more than other Asians like Mongolians or Kazakhs), their clothes’ style is the same, their gestures, their behaviour, their habits, and their tastes also. Koreans don’t like to be mixed, they believe and trust only their “race”.

Usually, they stay in groups (only Koreans), move, work, and live in-group.

One example is the word –my- don’t exist in Korean, it’s only –our- : my phone became our phone in South Korea. It’s clearly a collective society and not individualist, which explain their resemblance. Also, Koreans are of a high context culture, since they have the same references and background they mostly act and react in one way. Moreover, they look very calm, not very talkative; they don’t really think deeply, and they give short answers. These facts give them an image of cold and distant people.

They are most of them good at their work, that’s why in their logic they don’t need to know more. Actually they are not curious at all, it’s the first time in my life I meet people as much indifferent to knowledge, to foreigners, to others cultures, to “outside” in general. As a Moroccan I’m frustrated very often. In my country people are very warm, they smile often, talk a lot, they have enough knowledge (in Arabic, Western and African Worlds), that’s why Morocco one the contrary is a low context culture.

However if you observe them a little bit more they are completely different when they are together. They talk a lot, loudly, they are dynamic, and get easily excited. It’s hard to communicate with them; it’s seems like their past’s humiliation from Japanese is still present in their mind which refrains them to be extravert with foreigners. They are certainly indifferent and deceptively quiet to foreigners but only because of their high suspicious. At last, what is noteworthy in South Korea is the respect of hierarchization. Indeed, In South Korea, the most polite way to greet someone is, bowing.

However, in business: you can simply shake hands or bow at the same time. The tradition wants the person the less high in the hierarchy bow first, while the highest in ranking give his hand first. In daily life, the same respect is imposed from the oldest to the youngest. Honestly, I get confused sometimes. In my country, usually we respect oldest by talking to them in a formal way, let them get the priority (like to sit in bus or subway first), but the age will never give any kind of privileges, only your personality and your social success impose a special respect.

Moving in a new country is certainly a rewarding experience, but sometimes we have to face some cultural shock. My current experience in South Korea leaves me unsatisfied and some how disappointed. I have never imagined that the Korean society would be that different from mine. The likeness of people, their contradictory behaviour and how they express their respect, surprised and discouraged me sometimes, but even though I can’t judge a country because of its difference. I have two month left in this country; I hope I will get some good surprises and more good memories.

Moving to a New Country. (2016, Oct 11). Retrieved from https://studymoose.com/moving-to-a-new-country-essay 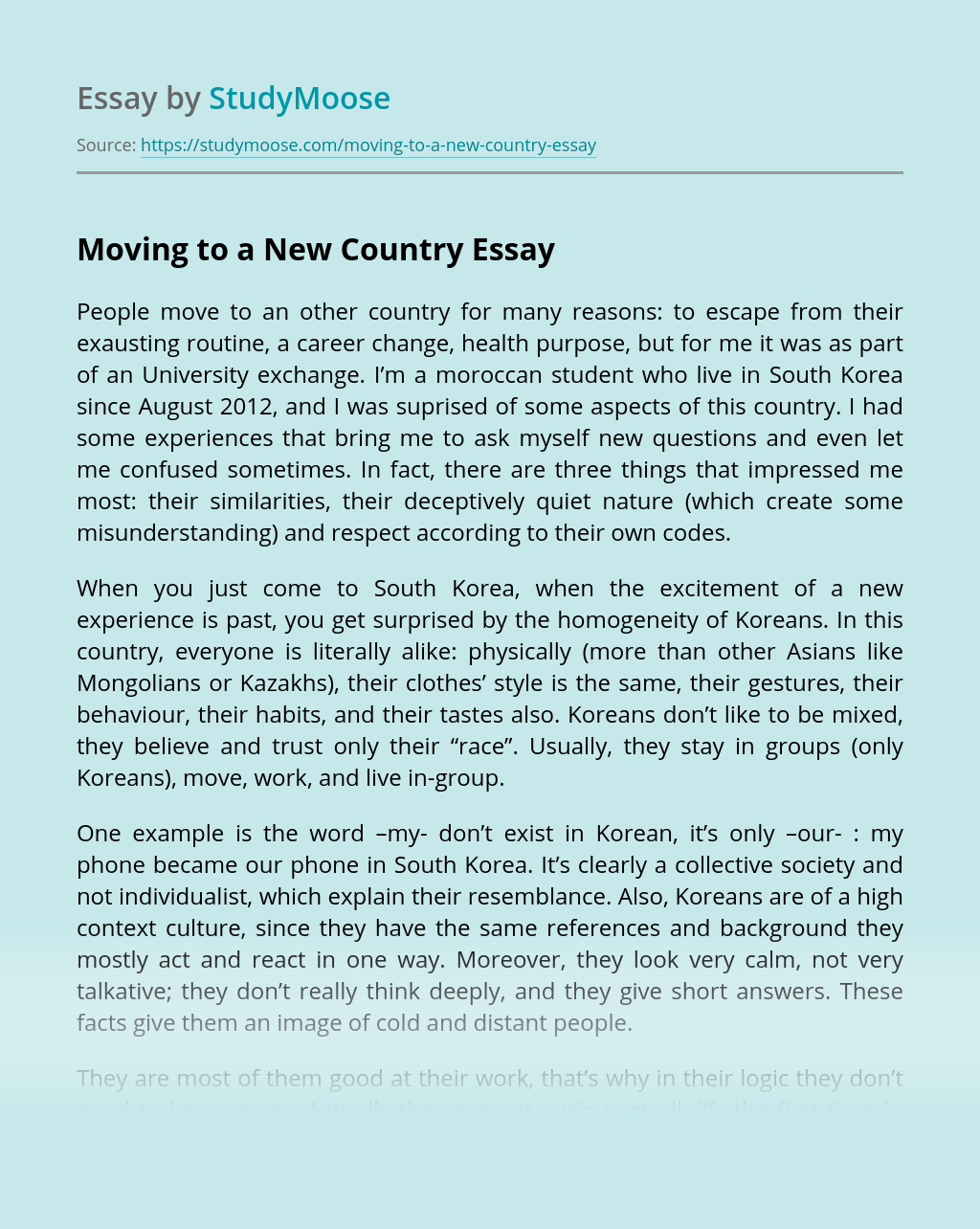 On August 6 1945 the first atomic bomb was dropped on Hiroshima and the second one was dropped at Nagasaki on 9th August 1945. The atomic bomb pelted on Japan was initially intended to force the Germans into submission but after the Germany surrendered, Japan was left as the threat to world peace. (John F.... VIEW ESSAY

View sample
McCarthyism and the Crucible

Throughout history there have been many events that are direct parallels of each other. These parallels are evident in Joseph McCarthy’s, McCarthyism and in Arthur Miller’s, the Crucible. McCarthyism was the fear of communism that was created by the Wisconsin Senator Joseph McCarthy. This was a time of fear after the Second World War in... VIEW ESSAY

View sample
Get Essay
Kierkegaard vs Sartre: An Existentialist Approach

“Is live worth living? That depends on the liver,” is quite an anonymous, but knowledgeable, quote. Though this may seem a more modern way of viewing life itself, this quote actually resembles that of a much older perspective: that of an existentialist. Existentialism, is, essentially, the philosophy that life is meaningless, unless one defines that... VIEW ESSAY

View sample
Imagery in Ode to the West Wind by P.B.Shelley

Ode to the West Wind is a poem by Percy Bysshe Shelley that shows the correspondence between the inner and the outer world of the poet. It is among his famous poems. The major theme of the poem is the poet’s intention to become a force that may bring the change and rejuvenation in man’s... VIEW ESSAY

Leadership is the process of influencing people and providing an environment for them to achieve team or organisational objectives. As a property, Leadership is the set of characteristics attributed to those who are perceived to use such influence successfully. Leadership involves neither force nor coercion. It is widely believed in the world of business that... VIEW ESSAY