Moving the NHS From Public Sector to Private Sector

The National Health Service (NHS) is a state run entity set up by the Labour government after 1948 as part of the welfare state. It was originally run by local authorities with funding from public money allocated by central government. Though in recent years this money has been moving to the private sector and many have speculated that this is privatisation by stealth. In this essay I will attempt to understand this process by giving some historical context to the events of the last few decades while pointing out some of the advantages and disadvantages, and the forms it could take, of privatisation.

Don't use plagiarized sources. Get your custom essay on
“ Moving the NHS From Public Sector to Private Sector ”
Get custom paper
NEW! smart matching with writer

In conclusion I hope to point to a future where the NHS can exist with public money and private management.

”It came out of a working class movement. The ‘powers that be’ introduced various health and welfare reforms after the Second World War in response to working class agitation and mobilisation梐 health system seemed a better option than a Russian revolution”1 This is a institution that does not fit easily into the world of market liberalisation and globalisation, but it is a right many people feel should be free and is even recognised by the U.

N. as a fundamental human right. Selling off the NHS, as previous Tory governments have done to other parts of the U.K.s infrastructure ”…would be politically unacceptable especially given the general popularity of the NHS and its entrenched public nature.”2But reform and change have accrued. The first change, by the Tories in 1983, was in the way funding was allocated.

”For example, budgets where previously allocated on the basis of geographical areas’ needs…Now funding is allocated as payment per patient…”3 This change allowed for the transfer of money from the public to the private sector.

This can be seen in the provision of private long term care ”which grew from 175,000 places in 1985 to 650,000 in 1998. This growth was funded almost entirely out of the public purse”4 This has led to a system where money is now thrown at the private sector through arrangements such as Independent treatment centres (ISTCs) and the private finance initiative (PFI). One such arrangement ”Ravenscourt Park cost  to set up and closed with a deficit of. These are figures that have to be borne by the NHS”5Clearly the NHS is now a half-way house between the public and private sectors. While the present Labour government seems set on pushing ahead with more ways of privatisation.

John Carvel noted that ”Health secretary Patricia Hewitt is preparing to transfer NHS hospitals buildings into the private sector as part of a bn scheme to promote competition in the health service…companies bidding for contracts…will be allowed to take over NHS premises, doctors and nurses.”6The implementation of this document are already in motion. Recently DHL gained a contract worth 6bn to provide non pharmaceutical supplies for ten years. Payment will be made ”…according to the savings it can make, which the government estimates at some n.”7So while this may seem like a good idea ”Effective implementation of grand investment projects…is hardly the governments strong point.”8 So to make this work DHL would have to be finely regulated. Given enough freedom so that they can destroy cosy past relationships, but not be allowed to bully suppliers and lower standards due to a need to please shareholders and make profit.

To see what problems a health service run for profit creates we only have to look at the USA and its private health system. The system of HMOs was set up in the 1970s by the Nixon administration. We can see from these comments recorded on the Nixon White House tapes, (Nixon quotes), that this system was created not to look after patients but to make profit.

While the US may have the most advanced health care system available, if a customer does not have enough money or adequate insurance their options are limited. These problems where highlighted in Michael Moores’ documentary Sicko, which compared the US system to that of Cuba, Canada and the UK. It could be said that the narrator was unabashed in his bias against the HMOs, but the case shown, that healthcare will become unaffordable for average people, may arise here if privatisation becomes widespread.

At the same time though because of the lack of reinvestment in the NHSs’ infrastructure and Gordon Browns’ adherence to EU spending targets, alternative funding methods must be found. A recent study by the European Health Consumer Index (EHCI) showed the UK at 17th place behind Ireland, Czech Republic and Estonia in provision of healthcare. Three countries a long way behind the economic development of the UK. In fact while per capita spending placed the UK in 12th place, the Czech Republic placed 21st showing that efficiency targets are possible if money is spent wisely.9This of course is the main argument for the involvement of the private sector in the provision of health care. That they will cut bureaucracy, while subjecting spending plans to stringent management oversight and thus provide better services for cheaper.

Unfortunately the ”reduction in public provision of long term care, NHS dentistry, optical services and elective surgery shows the trajectory for the NHS under the PFI.”10 We only have to look to Austria to find a publicly funded health system that allows patients who ”..regardless of salary, are entitled to use the services of the health system for free although they do pay higher income tax”.11 While looking at the EHCI tables we see Austria ranks in first place but only spends (figure here) more than the UK per capita. This suggests that the UK could indeed improve services without the need of the private sector but this would involve raising taxes, a strategy both political parties seem wary of due to potential lose of electoral support.

One new potential direction for the health service could be the internet. The main advantage of the internet is the access to knowledge that it can provide the customer while providing savings within the administration of the NHS. Unfortunately there is one problem that would need to be overcome, computer illiteracy. In most cases those with health problems will be the older members of society, those who are the least computer literate. This suggests to me that while saving could be made, they would not be worthwhile while we have a generation of customers who do not feel comfortable with computers or the the internet. In the long term there is potential, but unfortunately it does not provide any solutions in the short.

In does seem that the disadvantages of privatisation on its present course do seem to outweigh the advantages. The present government though has already started down a path that appears to be irreversible. While many within the service would agree that reform is necessary the problem is that healthcare is seen as a fundamental right provided by the NHS, a endowment to the citizens of the UK after the trauma of World War 2 and the sacrifices they had endured. The UK government has also shown on many occasions that it cannot regulate private companies, that are funded through public funds, to put the general public before profit. Looking at past privatisations of industries we can see, even in the case of the most successful, telecommunications, that this sector lags behind other European countries such as France where for example broadband infrastructure is far ahead of that provided in the UK.

Thus in conclusion the only solution that I can see is a single payer system with strong enough legislation that creates ”European wide regulation in the shape of pharmaceutical price controls and levies on research and education”12 In effect creating a new framework that allows the private sector to provide to provide healthcare. This way the tax payer can benefit from the private sectors skill in delivering increased productivity and value for money, while protecting against its’ overwhelming desire for profit.

Moving the NHS From Public Sector to Private Sector. (2016, Jul 29). Retrieved from https://studymoose.com/moving-the-nhs-from-public-sector-to-private-sector-essay 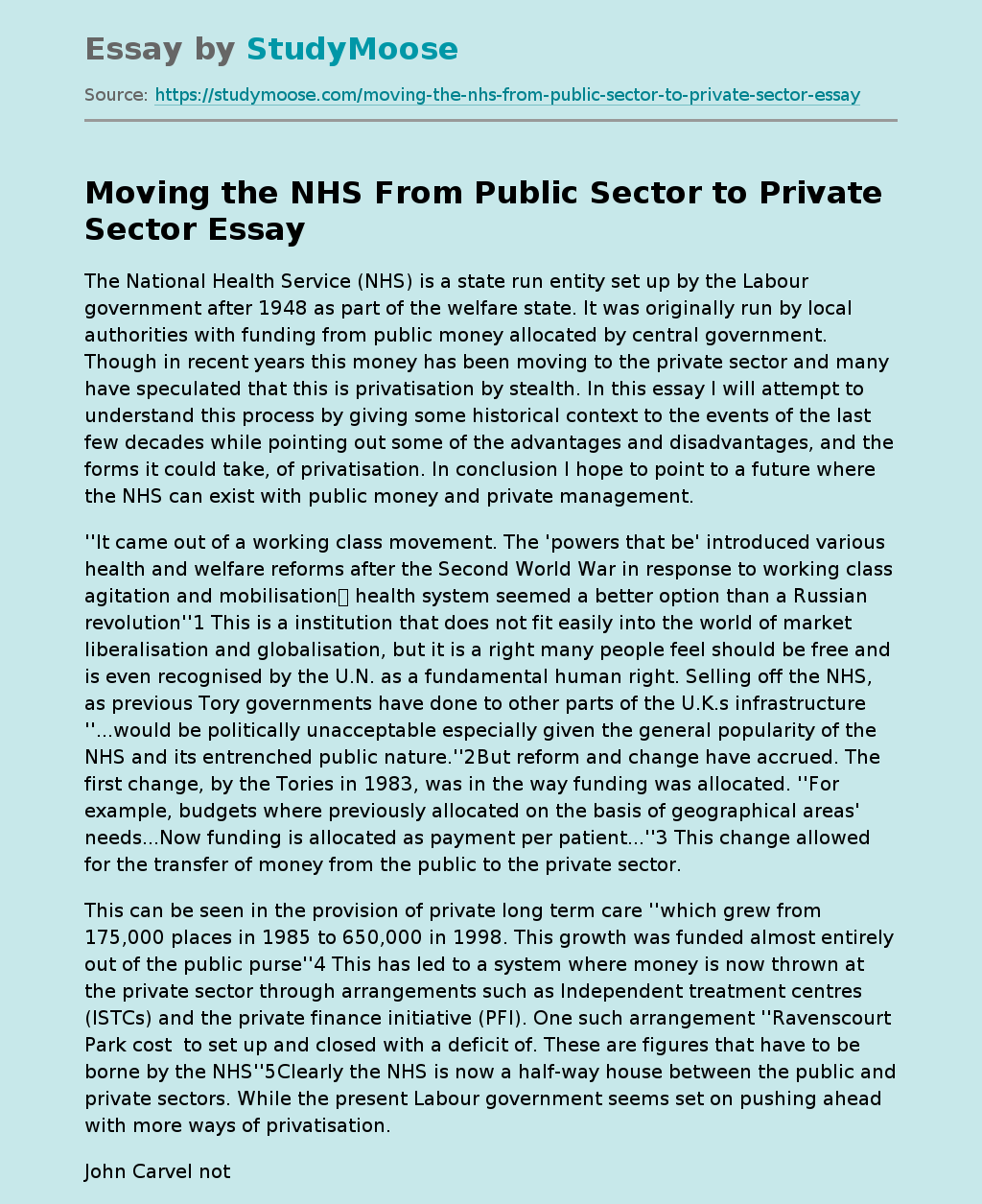