Many people feel the need to reject their native culture when they attempt to assimilate into American society. One of the major problems being a communication barrier one has to face irrespective of who we are and where we came from. Amy Tan, in “Mother Tongue” and Gloria Anzaldua, in “How to Tame a Wild Tongue” share their personal experience on how the same language is judged differently in American society. Tan describes the hurdles that she and her mother went through because of the so-called right English while Anzadula describes the problems that she went through because of her Chicano tone in American Society.

Don't use plagiarized sources. Get your custom essay on
“ “Mother Tongue” Analysis ”
Get custom paper
NEW! smart matching with writer

However, both writers argue that language is a key element of their ethnic identities and provide guidelines as well as inspirational sources for all immigrants. They describe the cruel nature of the American society where immigrants are judged by their language barrier or tone instead of their deeds, contributions, or smartness.

From “Mother Tongue”, Tan provides various examples of feeling ashamed because of her mother’s English during young age, especially when she saw how salespeople in stores or bank employees ignored or insulted her mother, hospital refusing to provide CAT scan reports because of thick accent, etc.

It appeared as if having “limited” or “broken” English was a huge crime. Anzaldua in her essay, “How to Tame a Wild Tongue”, also describes being in an awkward situation while speaking Spanish at recess such as- sent back to the corner of the room while speaking Spanish, inferior treatment from the dentist because of Spanish origin, rejected by her Latino friends because of her English, etc.

Both writers describe the harsh treatment by society to immigrants because of their language or origin. In my opinion, language or tone is just a way of expression of our feeling. None should be treated inferiorly on the basis of what or how one speaks.

Tan describes impacts various forms of English in her life. She describes her feeling, when she thought perfect English for her is limited or not perfect for others. She divides English into categories like “broken”, “limited” and “fractured”. She describes personal stories of her relationship with her mother, and how her mother’s “limited and broken” English has impacted her life. She describes that even though her mother’s English was “broken”, it was understandable, and it does not measure her intelligence. It was supported by following lines in her essay, “I wanted to capture what language ability tests can never reveal: her intent, her passion, her imagery, the rhythms of her speech, and the nature of her thoughts.” Anzaldua also describes her hardship because of not speaking English by the following lines in her essay “Pa’ hallar buen trabajo tienes que saber hablar el ingl?s bien. Qu? vale toda tu educaci?n si todav?a hablas ingl?s con un ‘accent.” Her mother wants her to get a good job by speaking English like Americans rather than struggling like herself. In today’s world, a language does not measure your intelligence but is just a form of expression.

Tan also describes how being Asian American impacted her negatively initially at younger ages. For example, lower grades on her standardized test due to various forms of “Englishes” she used at home. But realized that she could address more audiences with various form of “Englishes” and started using them which is evident by following lines in her essay, “I began to write stories using all the “Englishes” I grew up with: the English I spoke to my mother, which for a lack of better term might be described as broken”. She finally uses two versions of English- the formal language and her mothers’ water down English. Anzaldua also shares that being Mexican is equally as important to her as being American. She writes her essay in two languages providing equal importance to her native as well as the American language. They are proud of their language and continue to use it to keep it alive.

People say America is a melting pot of different races, environments, languages, and beliefs. People come from various countries with different culture and ethnicity. It is so difficult to accept and adopt new culture as there are many challenges and struggles to achieve the goal. Both writers try to convey to readers that, adapting a new language doesn’t mean we have to change our own value, forget our ethnicity, but importantly show respect to other languages. Additionally, both authors realized that there is nothing to be embarrassed by your mother tongue which shows your identity about who you are. In my opinion, adopting a new culture is similar to wearing a pair of brand-new shoes which gives discomfort when you wear. 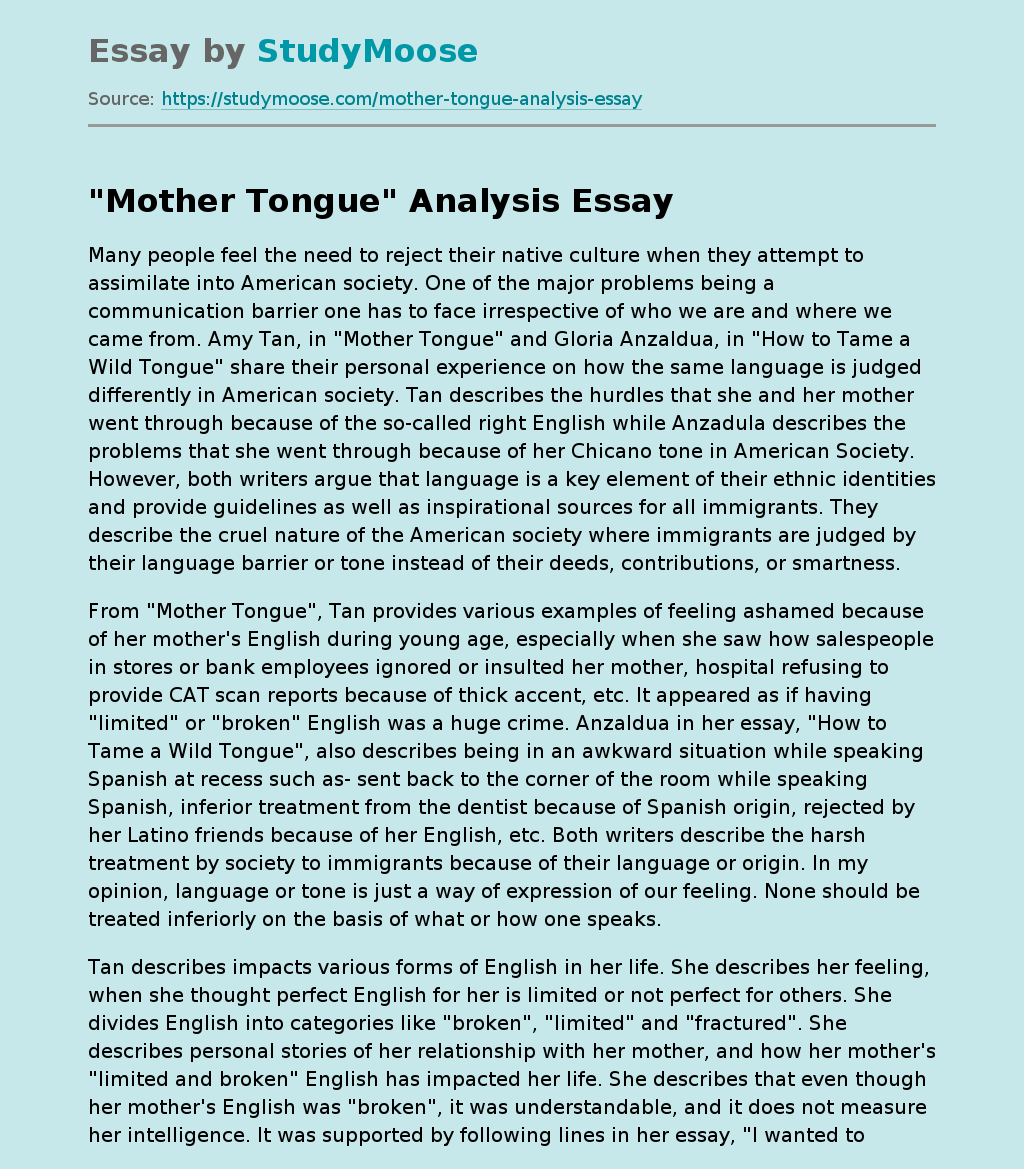