Laws were just as important to ancient societies as they are today, keeping an essential balance between interacting individuals. Without them, members of a society would be able to treat their fellow citizens in any way they wished, even if for purely personal gain. Some of these laws were made by the leader or leaders of the society. These were accepted as being for the common good. Other laws were developed within the society, things deemed “socially acceptable.” Examples from today might be chewing with your mouth closed and dressing formally for a church service.

There were also laws that were set by religious beliefs or moral codes and were highly respected. Breaking these laws would mean doing something like stealing, killing, or cheating. As cultures evolved, and beliefs changed, written, social, and ethical laws often conflicted with each other and created conflicts in society, as described by the play Antigone by Sophocles. In this play, there is a clear conflict between the written law made by the king, and the higher law, dictated by the religious beliefs of the time.

When Creon, the king of Thebes, decrees that the body of Polyneices should be left unburied, he believes he is doing the right thing. He sees this law as good for the people because they will see him as a good, strong king who will not tolerate traitorous behavior from anyone, including his own nephew. When the body is discovered to have been covered with dust, the first person that Creon looks to for taking the blame is the unfortunate sentry who brings Creon the news.

Creon tells the sentry that if he does not bring him the person who disobeyed his law that he is going to ” string you up alive, and there will be certain ways to make you discover your employer before you die” ( p. 314).

The king is assuming that there is an entire group of men conspiring to defy his law and they bribed the sentry to cover the body out of spite. The king obviously feels that the law was completely justified and that his people felt the same way. He feels that only men out to do great wrong would oppose it. The king is also using the poor sentry as a scapegoat so that he will feel, and have his people feel, that justice has been done, even if the criminal is not found.

When the guilty party is found to be merely a young girl who loves her brother and wanted his spirit appeased, the king is outraged because she blatantly states that his laws are incompatible with the laws of the gods. She also refuses to feign innocence. Fully confessing her actions indicates that she feels no guilt or remorse about what she has done. Creon interprets Antigone’s attitude to mean she is equivalently traitorous to her brother and that she should share his fate.

Ismene, her sister, was also guilty of breaking a written law because she knew that Antigone was going to commit her crime yet did not tell anyone. This means she broke a much lesser law than her sister, but she is innocent of the crime involving burying her brother. Creon, however, feels that she is just as much a traitor as her insolent sister.

Antigone is also guilty of breaking a social law of her time. It was expected that people respect the king’s laws without question. She told him to his face his law was corrupt. This socially unacceptable behavior is later repeated by Creon’s son, Haimon, and the blind prophet, Teiresias. Haimon tries to be discrete with his criticism and uses logic to attempt to convince his father that what he is doing is wrong. Despite Haimon’s efforts to evade his father’s bad temper, a fight breaks out and Creon stubbornly insists that his law is not only justified, but the only conceivable course of action for any respectable king.

Surely if Creon would not listen to emotional or logical arguments he would listen to the prophetic argument provided by the infamous Teiresias. He has much less to worry about when it comes to the unspoken laws of society since he is not a conventional member of society. When he approaches the king, Teiresias is very clear in his opinion of the situation. This causes Creon to lose his temper again and he accuses Teiresias of taking bribes, just as he accuses both the sentry and Haimon when they tried to tell him what he could not see. Later, however, the king realizes that the old prophet has always been right before and is in a much better position to place blame than Creon himself is in.

As obstinate as Creon is, the fact that he only realizes that his law is wrong when Teiresias tells him that he is breaking the gods’ laws demonstrates how highly regarded higher set of laws are. The people of Creon’s time believed that everyone must have a proper burial. When Creon left Polyneices in the field to rot and be devoured by animals, he was guilty of a true atrocity. Even though he was clearly guilty, he continued to put the blame on others, even those close to him when they tried to inform him of his grave mistake. Antigone realized that the higher law was more important than Creon’s law. That is why she defied Creon and buried her beloved brother. Antigone is the only person in the play who chooses to face the wrath of a mere mortal rather than suffer the wrath of gods.

Everyone can identify with Antigone’s attitude because all people have their own set of “higher laws” or moral values. These values have changed over time. Different people from different times and different cultures are obviously going to have varying views. In the days when everyone had the same value system because they were all the same religion, these values were reflected in the laws. As people progressed, they separated into different religions and beliefs so the laws changed with them, becoming more based on fairness and equality than enforcing moral values. This made it possible for people of many different beliefs to live together in relative peace and harmony. 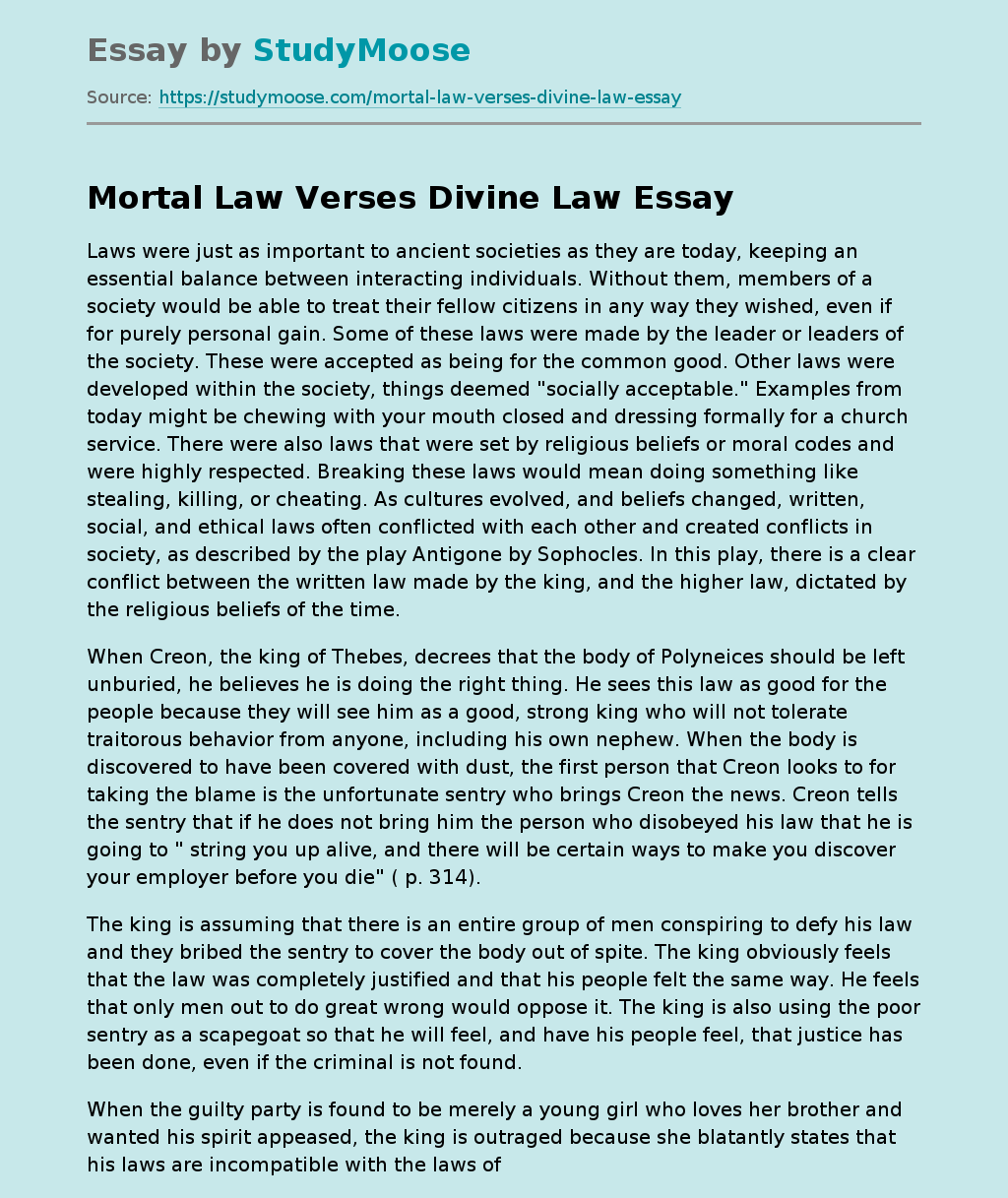