Anne Bradstreet’s “Here Follows Some Verses upon the Burning of Our House” is a perfect example of Puritan writing. Her faith and values are made apparent within the first ten lines of the poem. The poem is entirely about Anne’s thoughts as she watches her house burn. She makes the readers feel as though they are witnessing their own possessions and houses catch fire. Anne rhymes every couple of lines. This affects the way the poem flows and it allows the reader to process the two rhyming lines together before going on to the next couple.

Don't use plagiarized sources. Get your custom essay on
“ Anne Bradstreet’s “Here Follows Some Verses upon the Burning of Our House” ”
Get custom paper
NEW! smart matching with writer

Furthermore, Anne is very conscious of her word choice and uses words with very strong connotations. Words such as fire, ashes and ruin are all used to show the severity of the damage. All of her possessions are destroyed. However, she contrasts those words with words like hope, treasure and love. While the first group of words is used to describe her material possessions, the second group describes her faith and relationship with God.

It is clear that God and salvation are Anne’s first priorities.

Anne Bradstreet alludes to the Bible many times in “Here Follows Some Verses upon the Burning of Our House.” In Line 14 she says, “I blest His name that gave and took.” There are many biblical passages that discuss how God has given us everything and how he can easily take it away. In Line 40 Anne writes, “The arm of flesh didst make thy trust?” She is referring to people who become so full of vanity or pride that they forget that they are only made of human flesh.

They trust in themselves too much. Likewise the Bible says, “Cursed is the one who trusts in man, who depends on flesh for his strength and whose heart turns away from the Lord” (Jeremiah 17:4-7). Perhaps the most apparent allusion that Anne Bradstreet makes is in Line 43. She writes “Thou hast an house on high erect, / Framed by that mighty Architect.” A very similar passage in the Bible reads, “For he was looking forward to the city with foundations, whose architect and builder is God” (Heb. 11:10). Both excerpts discuss how those who are to be saved will live in a paradise, built for them by God.

The idea that salvation would be accompanied by paradise, along with other inspiration, led the Puritans to lead virtuous lives. Anne’s poetry reflects many Puritan values. In the poem she states that after she looked upon her burning home she “blest His name that gave and took, / That laid my goods now in the dust.” She is not angry about losing all of her possessions because she feels that they were God’s to begin with. Anne says that she would not repine over her lost material belongings. One very strong Puritan value that she displays is appreciation for what God has given her. Also, Anne never wonders why God had allowed this tragedy to happen to her or her family.

She simply accepts what He has done. Later in the poem, Anne acknowledges common sins that people often fall victim to. In Line 38 she asks, “And did thy wealth on earth abide? / Didst fix thy hope on mold’ring dust? / The arm of flesh didst make thy trust?” She reiterates the point that God has given her everything and she cannot be too proud of herself or her wealth, because God can take it from her at any moment. From this point on, Anne discusses the paradise that awaits the Elect. She concludes the poem by saying farewell to her property and belongings; she has no need for earthly possessions, because God offers her something greater.

Anne Bradstreet's "Here Follows Some Verses upon the Burning of Our House". (2016, Jul 21). Retrieved from http://studymoose.com/anne-bradstreets-here-follows-some-verses-upon-the-burning-of-our-house-essay 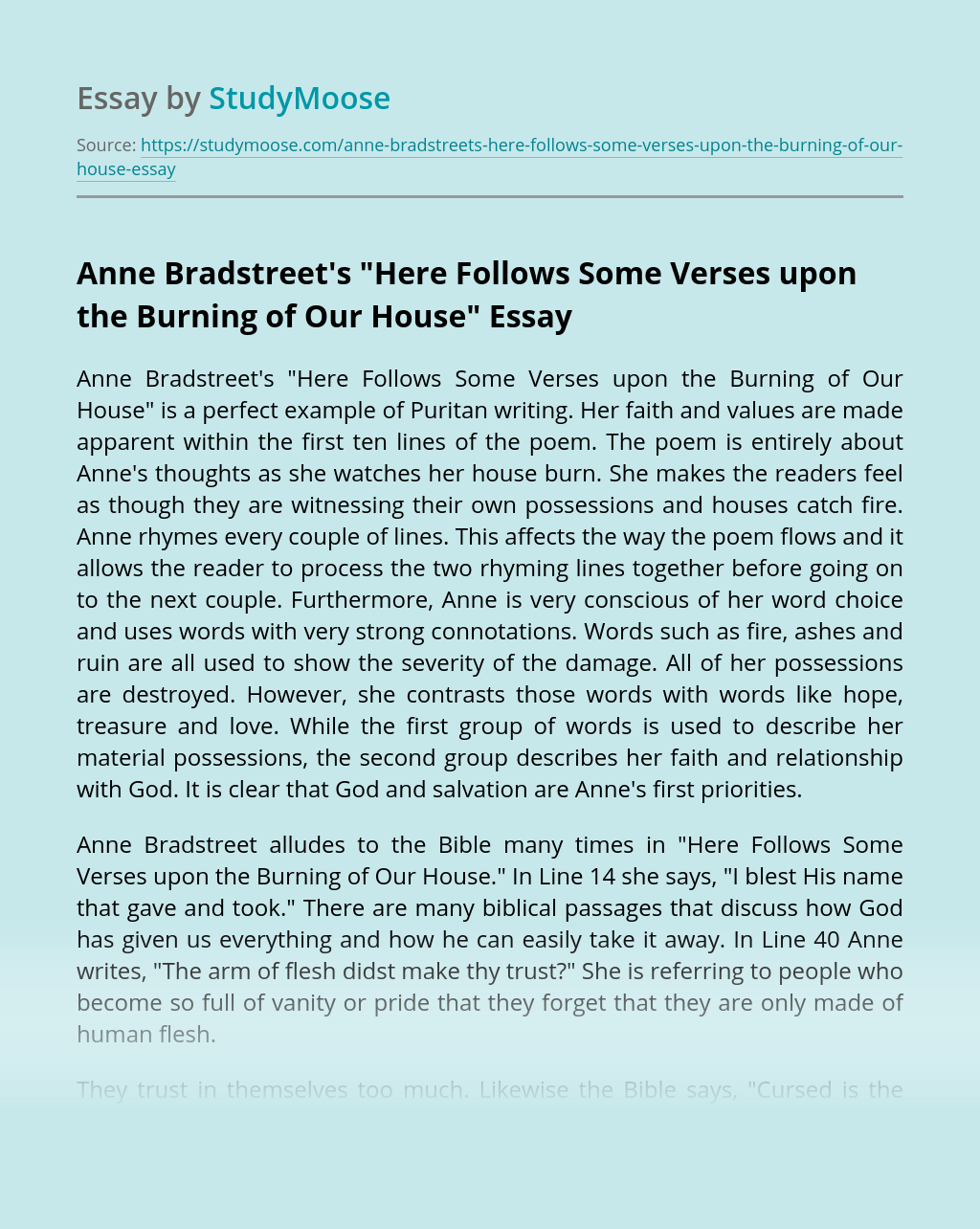