“Moana” and “The Gift Of The Magi” Comparison

Don't use plagiarized sources. Get your custom essay on
“ “Moana” and “The Gift Of The Magi” Comparison ”
Get custom paper
NEW! smart matching with writer

There are a lot more examples of how they are the same and different, but those are a few examples.

The theme in every story is one of the most important things. In fact, all fiction stories have them, including “Moana”, and “The Gift Of The Magi”. The theme in these two stories are mostly the same – they both sacrifice or risk something for the people or person they love. In “Moana”, the main character Moana risks her life while fighting monsters to save her island. In “The Gift Of The Magi”, Della sells her hair to get her loved one Jim a present.

“Twenty dollars,” said Mrs. Sofronie, lifting the hair to feel its weight.” Jim sells his watch that he loves because it been passed down for generations, and he sells it to get Della a present. These relate because, in both stories, they do something crazy for the people they love.

Every movie or short story is different, counting “Moana” and “The Gift Of The Magi”. They have many differences, but they also have a lot that’s the same. They are the same because they both get someone a gift. Moana gets her whole island a gift, which is saving them and their island itself. Della and Jim get a gift for each other. Jim’s gift to Della combs for her hair. “I sold the watch to get the money to buy the combs.” Della’s gift to Jim is a brand new watch chain. They are also the same because in both stories the main character or characters lose something or someone they love. Moana loses her grandmother who she loved very much. Della loses her long beautiful hair, and Jim loses his precious watch that’s been passed down throughout his family. Finally, they are the same because everyone who has lost something has something to remember it. Moana lost her beloved grandmother, and in the middle of the story she had a glowing rock to remember her loved one, but at the end of the movie, there was a certain sting ray that she could remember her grandmother by. Della loses her hair, and she has the combs that Jim bought her to remember it. Jim lost his watch, and he has a watch chain from Della to remember it.

“Moana” is very popular and has kids watching it all over the world. “The Gift Of The Magi” is being read by many people, but not as many as “Moana”. Both have their differences and how they are the same. They also have their themes. Their themes are basically the same, but it is still important. Do not be afraid to risk or sacrifice something for the people you love. One final difference between the two stories is that Moana had a purpose for her gift, but Della and Jim’s gifts ended up being useless because they did not have the watch or hair to go with the gifts. “Here I have told you the story of two children who were not wise. Each sold the most valuable thing he owned in order to buy a gift for the other.”

“Moana” and “The Gift Of The Magi” Comparison. (2020, Oct 11). Retrieved from https://studymoose.com/moana-and-the-gift-of-the-magi-comparison-essay 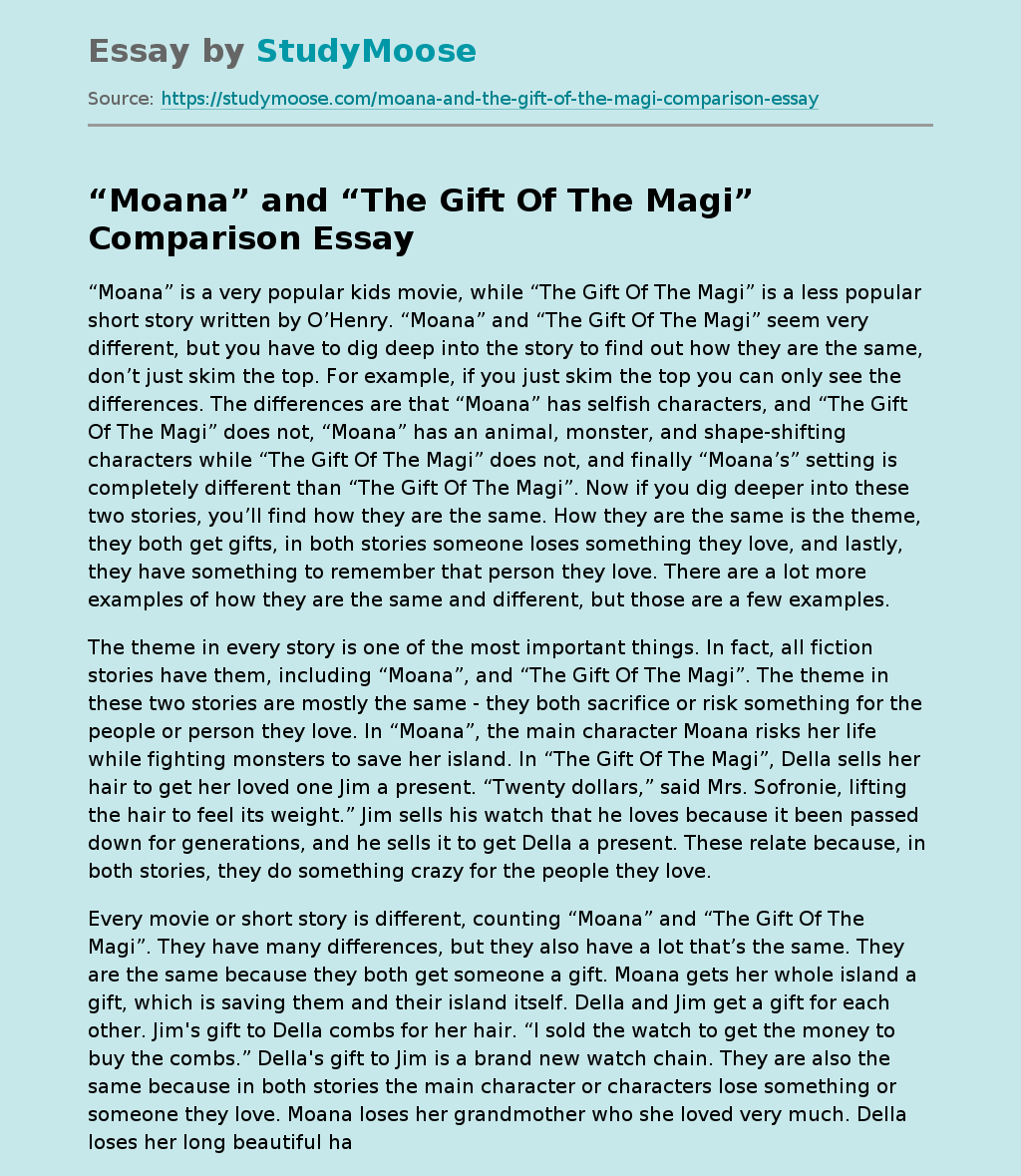