Should the minimum age for driving be raised?

In Ontario, you are able to take the test and get your driver’s license at the age of 16, but you need to have an experienced driver beside you until you’re 17 years of age.

Don't use plagiarized sources. Get your custom essay on
“ Should the minimum age for driving be raised? ”
Get custom paper
NEW! smart matching with writer

In my opinion, I think that the driving age should not be increased because the rates of fatalities are high but not as high as the older age groups, the older you get the harder it will be to learn the laws and regulations of driving itself, and the older they get the more chances of drinking and driving.

Firstly, just because of raising the driving age does not prevent car accidents from occurring.

Many adults tend to have a major impact in the accidents that occur now days. For instance, from the recently collected data in 2009 of the percentage of driver fatalities and serious injuries by age group shows that the ages from 25 to 34 faced the most number of injuries and fatalities compared to the any other age groups. From the 25 to 34 ages about 17. 1 % faced fatalities and 19.

Furthermore, the second most age group that faced harsh outcomes from accident were from the ages of 45 to 54. 18. 4 % of the people encountered fatalities and 18. 2 % faced serious injuries. (http://www. tc. gc. ca/eng/roadsafety/tp-tp3322-2009-1173. htm#t2) This data collected illustrates that accidents occurred more to the older age groups compared to the young drivers. Therefore, by increasing the age group the teens would be penalized for the few teenagers that actually were involved in the accidents.

What good would it be if you increase the age of driving, but have drivers don’t comprehend the key information that they learn. Also, this could be the cause of serious injuries and death to pedestrians, passengers and drivers. Hence, this action will be much more unsafe to the public rather than keeping the youngsters from driving early. Lastly, as you increase the age of driving, the drivers will become eligible for intoxicating themselves with alcohol and driving. In addition, there was a data collected of the percentage of fatally injured drivers tested and found to have been drinking in 2008.

If the drivers were younger there would be much less chances for that to occur because when you’re 16 or 17 years of age driving; they would not be able to buy any drinks. Therefore, the driving age should not be raised. In conclusion, the age should not be raised for driving because collisions occurred more to the older drivers than the younger drivers, the older you get the harder it will be to learn the rules of driving, and the older humans get the more chances of drinking and driving. Accidents happen to any one does not matter whether they’re 18 or 40 so, what difference would it make by increasing the age of driving?

Should the minimum age for driving be raised?. (2020, Jun 02). Retrieved from https://studymoose.com/minimum-age-driving-raised-new-essay 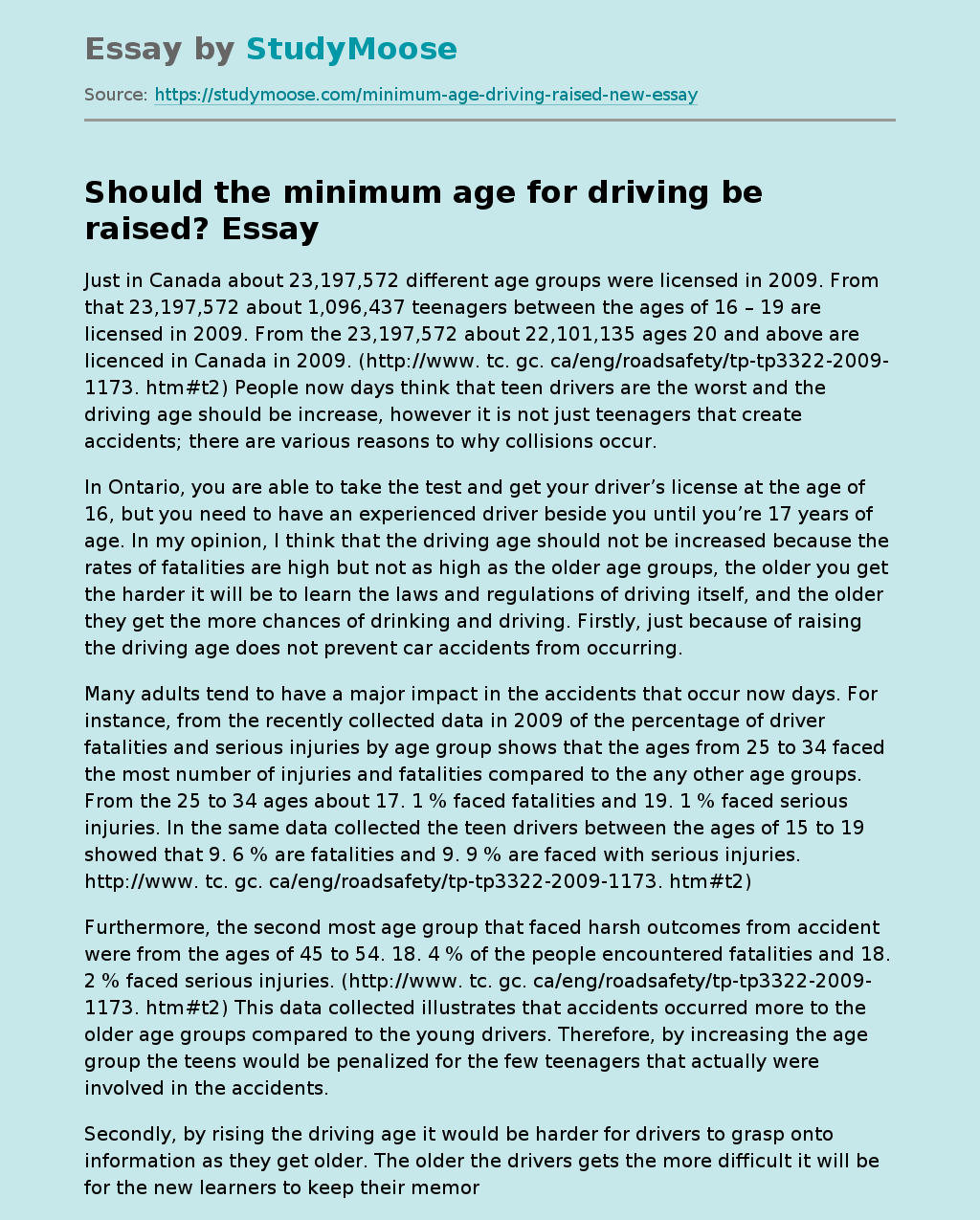