The intention of the following text is to elaborate the use of meta-fiction and narrative layering in Tim OʼBrienʼs The Things They Carried through writing a narrated interview with Tim OʼBrien regarding Part Fourʼs study: Literature and Critical Study. Using quotations/transcriptions of Tim OʼBrienʼs statements within the fictional interview will support the structure of the text accordingly as a narration of an interview. First, I will address Tim OʼBrienʼs brief biography regarding his career, education and works.

Don't use plagiarized sources. Get your custom essay on
“ Meta-fiction and narrative layering in “The Things They Carried” by Tim O’Brien” ”
Get custom paper
NEW! smart matching with writer

The narration will continue with an introduction from the interviewer, briefly regarding his works and the incorporation of observed application of meta-fiction and narrative layering. Then, a personal acknowledgement of the use of meta-fiction and narrative layering in his work, The Things They Carried, will be mentioned discreetly and indirectly.

Several techniques used to break down Tim OʼBrienʼs work in aims to identify the usage of these literary devices will be addressed – then the narration will be preceded by several questions and answers addressing the application, role, and purpose of the usage of meta-fiction and narrative layering; this will be supported by direct contextual examples from the text studied.

A brief re-cap on the definitions of both literary devices will be addressed. The closing of the interview aims to emphasize the coherent application and purpose of these techniques in the intervieweeʼs work.

Tim OʼBrien, an American citizen, is acknowledged as a novelist and/or a short story writer.

He is highly recognized for his work, The Things They Carried. His works are under the genre of memoirs and war stories, more specifically those correlated with the Vietnam War, or as he would refer to it as the Vietnam Conflict. Neal Conan and Michiko Kakutani defines his work, The Things They Carried, as “a critically acclaimed collection of semiautobiographical, inter-related short-stories inspired by O’Brien’s experiences in the Vietnam War.” A stellar student, he was the president of the student body and earned his degree in Political Science in 1968 – after he graduated, instead of paving his own career path, he was drafted to join the United States Army. Sent to Vietnam, he was on duty until the 1970s. After his duty, he continued his studies in Harvard University, which lead him to his career as a writer. After being drafted and earning his graduate school degree, Tim OʼBrien wrote in his memoir, “Can the foot soldier teach anything important about war, merely for having been there? I think not. He can tell war stories.” And so he did just that, he told war stories.

Having the privilege of interviewing him personally, I addressed and accredited him for his excellent works – both for serving in Vietnam and his works as a writer. I planned to ask him regarding his work, The Things They Carried, to ask him regarding the observations of the usage of meta-fiction and narrative layering. I thought to myself in the beginning of the interview, how ironic it was to ask him about his experiences in the Vietnam War (or Vietnam Conflict) while I already read an entire book based upon his personal war stories. I decided to address my ironic thoughts and he responded, “Didnʼt you realize? The ʻTimʼ I mentioned repeatedly in the book, is not based on me, Tim OʼBrien, itʼs a fictional character I embedded within the book! I honestly, did not refer to the real experience I encountered, instead I referred to my own fictional narratives.” Before I asked him my scripted questions, he led the interview towards the two topics I was to talk about, narrative layering and meta-fiction.

Based on everything2.com, the characteristics of works that use both these literary devices include the reference to itself as well as the creation and/or discussion of fictional works by fictitious characters. Tim OʼBrienʼs works can be broken down when aiming to identify the application of meta-fiction and narrative layering.

Within Speaking of Courage, a character ʻTimʼ is present. Written in third person narrative, and having the same name as the author, I personally thought that Tim, the character, was Tim, the writer. Though the literal Tim OʼBrien addressed that “I am Tim, Tim OʼBrien, but Tim is not me.” I gave him a blank stare, attempting to understand his point then I realized that he used narrative layering within his work. The first layer can be considered as when Tim, the character, heard about Bowkerʼs story, then the story lead to the second layer at which Tim, the writer, made it seem like Bowker is retelling the story. In fact, the whole story itself, is narrated by a fictional narrator, this discovery is and can be seen as the third and final layer.

This discovery proves both the application of meta-fiction and narrative layering as it writes fiction based on fiction and is narrated by layers of fiction characters. Even within the beginning pages of the novel, though insignificantly mentioned, it is stated that it is a “work of fiction” and “lovingly dedicated to the men of Alpha Company, … Jimmy Cross, Norman Bowker, Rat Kiley, … and Kiowa”. “Did you realize? I schemed the writing of that page to enhance the fact that this entire novel is a fictional piece. Tim, the character – the fictional character, wrote this page, not Tim as in myself,” he smirked while explaining.

“Within Notes, I began writing by referring to Speaking of Courage, that in itself can show that I referred to my own fictional work – that is meta-fiction,” he clarified. Whilst in On A Rainy River, a statement brings upon the reference of itself – as stated above, this technique can be used to identify the usage of meta-fiction. The narrator of the story explains, “Now, perhaps, you can understand why Iʼve never told this story before.” (Pg. 54) – the narrator addresses the story within the story.

The story How to Tell A True War Story is the epitome of a meta-fiction-filled work. It starts off stating, “This is true,” (Pg. 64), then leads to the confusion of readers that if a war story “seems moral, do not believe it,” as it is a “very old and terrible lie.” (Pg. 65) Every definition of a ʻtrueʼ war story within is alternatingly opposed through the differing versions of the fictional characterʼs narratives. Patricia Waugh declares that meta-fiction-filled work “selfconsciously and systematically draws attention to its status as an artifact in order to pose questions about the relationship between fiction and reality,” at which is all present within this story.

Evidently visible within his work, Tim OʼBrien demonstrates the usage of both literary decices. Acknowledging the help of these literary devices, he states that narrative layering makes “the source material stronger and the core story

more engaging.”1 While the other literary device, meta-fiction is defined as the act of writing about writing, acts as a tool to remind readers that even though the narratives he writes are fiction, “sometimes stories can be more real than reality itself.” Using it to the extent of “foregrounding the fiction of fiction and reality,”2 – he applies meta-fiction as how John Barth defines it. He writes based on the imitation of novels/narrative fictions rather than writing fictions based on reality, undeniably present, his works show self-conscious examinations of fiction by referring to itself. Written with excellence, Tim OʼBrienʼs works uses both literary devices – he explores thoroughly, the purpose of writing.

Meta-fiction and narrative layering in "The Things They Carried" by Tim O'Brien". (2016, May 27). Retrieved from http://studymoose.com/meta-fiction-and-narrative-layering-in-the-things-they-carried-by-tim-obrien-essay 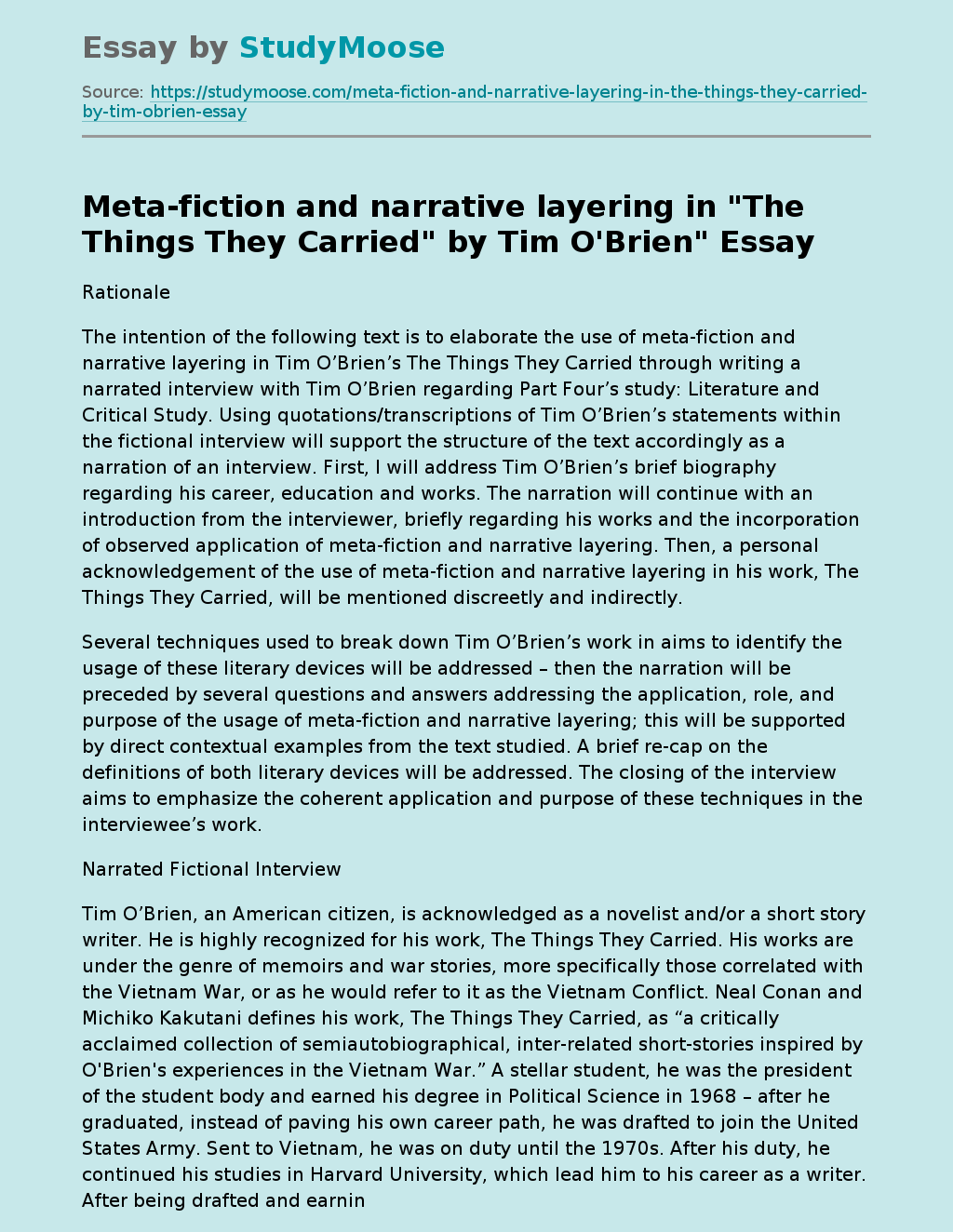