1 (a) MOST PREVALENT MENTAL HEALTH ISSUES

Mental health is addressed to a degree of emotional well-being or simply the absence of any mental disorder. In simpler terms, mental health may be defined as an individual’s capability to be able to enjoy life while creating a balance between the routine life activities and adjusting to the adversity and stress in life According to World Health Organization (WHO) ,mental health includes “subjective well-being, perceived self-efficacy, autonomy, competence, intergenerational dependence, and self-actualization of one’s intellectual and emotional potential, among others (WHO Programme for Mental Health, 1985).

The mental health issues or simply mental illness is a disorder o the brain functioning. This may result from complicated interactions in between a person’s genetics and environment.

The causes may vary in each individual depending upon the type of mental illness (Mental Illness, History, 2005). Some of the most prevalent mental health issues globally are-

1 (b) DEMOGRAPHICS OF MENTAL HEALTH ISSUES

Each individual is unique and so are the factors causing mental illness. It is measured that people living in poor socio-economic conditions are more prone to the common mental disorders namey anxiety and depression. This is further worsened by unemployment, poor education status and other financial disadvantages. The most common mental illness in UK today is anxiety. It accounts for affecting 9.2% of the total population.Next in line is depression affecting one in 200 children under the age group of 12 years (Voelker, 1999). This ratio decreases in teenagers to three in 100 .

Every year a large number of people would have their lives altered by an mental health issue and it is hence essential that we try to find however much we can about the improvement, onset and treatment of these psychological health issues.

1 (c) IMPACT OF MENTAL HEALTH ILLNESS ON THE INDIVIDUAL, THE COMMUNITY, AND THE COUNTRY

Despite the fact that the particular societal effect of mental sickness fluctuates among societies and countries, untreated dysfunctional behavior has noteworthy expenses to society. At the point when mental sickness expenditures and loss of profitability are both considered, the WHO evaluated that mental issue cost national economies a few billion dollars annually.In expansion, mental health issues can compound other general health issues, expanding the weight on national economies and blocking global general health efforts.Although the dominant part of people with dysfunctional behavior don’t show risky practices, violence and detainment among rationally sick people can put a critical burden and social weight on communities and countries.

How each individual deals with his mental illness is unique.Sadly, numerous individuals have negative perception of mental health issues. Pessimistic attitudes and an absence of comprehension can bring about individuals with mental health issues to be dealt with wrongfully or labelled in a manner that damages their stand in the society. This is once in a while called ‘stigma’, and can influence those with mental or emotional issues and their jobs and families (Thomlinson, 2006).

Disposition toward mental health issues variate among people, families, ethnicities, societies, and nations. Social and religious teachings regularly impact convictions about the inceptions and nature of mental sickness, and shape mentality towards the rationally sick (Wallach, 2004). In addition to impacting whether mentally sick people experience societal stigma, beliefs about mental illness can influence patients’ status and ability to look for and hold fast to treatment. Subsequently, understanding individual and social convictions about altered mental behavior is key for implementing compelling ways to deal with mental health care.

Our emotional well- being, psychological well -being and social well-being all put together as one defines what we call as mental health (Bhadra, 2012). A healthy mind is essential in all stages of life beginning from childhood and teenage to adulthood. Mental health affects how we feel, what we think and how we act.

Marcia though brilliant in her field of work seems to suffer from mental illness. This is underlined by the fact that she stays in her house for days together and even gets her shopping home delivered. She keps herself away from people and the routine activities of life. Her sleep patterns and eating habits are disturbed as she sleeps late at night and even forgets to eat food. Though competent in her work, she failst o maintain her hygiene and does not even perform the basic task of bathing each day. She feels happy in her qon little coccon and does not want to open up and mix with people around her.

All these symptoms, though very normal to look at could be masking a serious mental health issue. Marcia should consult with a specialist and change her attitude towards looking at things. She should socialize as man is a social animal and should take care of her health by monitoring her sleep and food patterns. 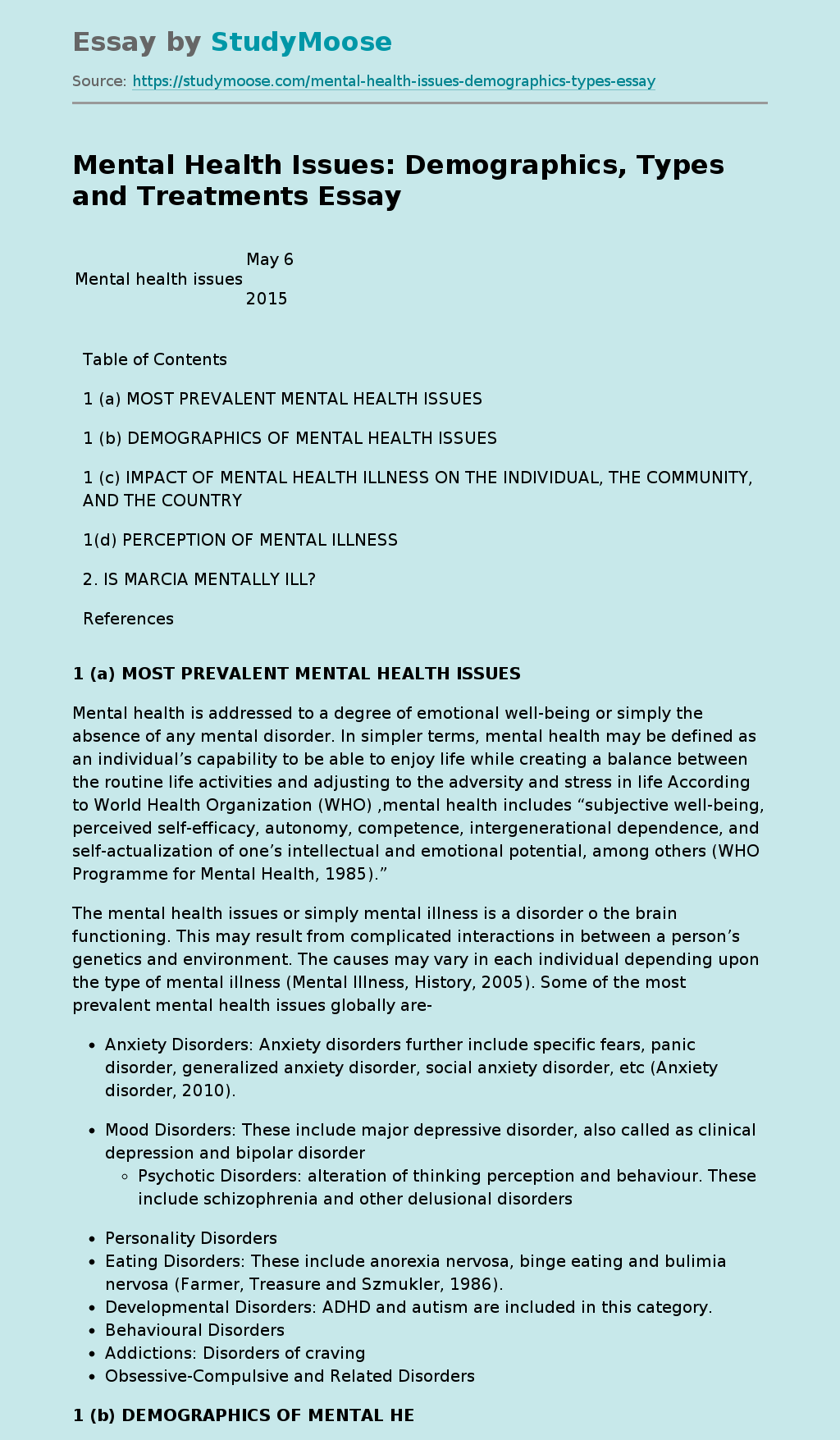