Medicinal herbs of folk-origin are significant sources of synthetic and herbal drugs. For the past few decades phytochemical examination has been making rapid progress and herbal products are becoming popular as sources of plausible anti-cancer compounds. The natural products of flavonoid type like luteolin and quercetin have the ability to inhibit the proliferation of cells in human carcinoma of larynx and sarcoma-180 cell lines (Filder et al., 2003). The herbal medicines may have some advantages over single purified chemicals. In fact, several studies have demonstrated that the extracts from several herbal medicinal plants poses anti- cancer potential in-vitro or in-vivo.

Don't use plagiarized sources. Get your custom essay on
“ Medicinal herbs of folkorigin are significant sources of synthetic and herbal drugs ”
Get custom paper
NEW! smart matching with writer

They have also reported that Phenolic and flavonoid contents in plants provide antioxidant activties that many underline the anti-cancer potential (Meyers et al., 2003). The National Cancer Institute collected to about 35000 plants samples from 20 countries and has screened around 114,000 extracts for anti-cancer activity. Out of this screened, two or three most important anti-cancer compounds are available today, as anti-cancer drugs namely taxol and camptothecin (Bloch, 2000).

In a recent study Wei and his colleagues studied the in-vitro anti-bacterial and toxicological properties of essential oil of Rosmarinus officinalis L on cancer cell lines. They found that the essential oil contains three main chemical components namely 1, 8-cinelole, ±-pinene and І-pinene and showed greater activity that its components in both anti-bacterial and anti-cancer test systems on the basis of their concentrations (Wang et al., 2012). It has been reported that the essential oil of pistacia lentiscus, a natural combination of bio-active terpenes exerted anti-tumor growth activity when tested against a broad spectrum of cancers including mouse Lewis lung adenocarcinomas.

This study provides novel evidence supporting a multi-potent role for mastic oil in prevention of curicial processes related to cancer metastasis (Heleni et al., 2011). Similarly, the Geraniol and other monoterpenes found in essential oils of fruits and herbs have been suggested to represent a new class of agents for cancer chemoprevention and anti-proliferative properties by its polyamine metabolism (Carnesecchi et al., 2001). The essential oil and the methanolic extract of Mentha pulegium, were analyzed for cytotoxicity on human ovary adenocarcinoma SK-OV-3, human malignant cervix carcinoma HeLa and human lung carcinoma A549 cell lines and were found to be effective over them. They also suggested that further biological tests on the efficacy and side effects of this plant are necessary before it use in human (Farshad et al., 2004). A recent research study states that, the Citrus essential oils (Eos) contain different terpenes that have been shown to possess anti-tumor effects. In their study they determined the cytotoxic effect of essential oils of Citrus aurantium L. peels on a colorectal cancer cell lines (Fadi et al.,2012). Conclusion Obtained From Literature ReviewFrom our literature review we also found that different solvent extracts of Hedyotis corymbosa, Inula racemosa and Holostemma adakodien have been reported strongly for their traditional as well as their proven pharmacological uses. All these above mentioned literature review relates the potential benefits of using these plants as medicine for microbial infection, inflammation, cancer and the associated oxidative stress with cancer. Moreover, these literature reports warrant and provide us a new avenvue for the commencement of our research work in these a medicinal plants. PHYTOCHEMICAL INVESTIGATIONSIntroductionMedicinal plants and natural products are having the great interest due to their use in herbal medicine. In this context, the phytochemical composition plays a major role in their pharmacological investigation of plant extracts. Medicinal plants are an important element of natural medical system (Ayurveda) in India and other parts of the World. Phytochemistry is a sub branch comes under botany and chemistry deals with the plant or plant products chemical nature (Chemistry of natural products). In a narrower sense the term is used often to describe the large number of secondary metabolic compounds found in the plants which are therapeutically active or inactive. Now a day’s interest in the study of natural products is developing rapidly due to the drug discovery programs. Various existing methods are there to extract the secondary metabolites from the plant. However, effective extraction is influenced by the method as well as the selection of solvents.Isolation of morphine from opium poppy (Papaver somnifeum) is one of the greatest turning point in the pharmaceutical industry by Friedrich in 1806. In 1853, the active ingredient salicyclic acid found in no. of plants which is key element to development of asprin. During 19th to 20th century research leads to purifying the active extracts (essential oil) from medicinal plants (Okhale et al., 2014).Throughout the world naturally obtained drugs are used for the benefit of human and as well as animal healthcare (Kalip et al., 2016). In general plants offer huge number of natural compounds belonging to different molecular families which plays significant role in human health. The medicinal value of these plants lies on certain chemically active substances that produce a definite physiological action on the human body which are known to as plant metabolites (Rajendra et al., 2011). These plant metabolites differentiated into primary and secondary metabolites, out of which primary metabolites are synthesized by plants for their essential use, such asgrowth and development. Secondary metabolites are important constituents of food / animal feed and utilized in agriculture and pharmaceutical industries. Aromatic plants widely used in traditional medicines since the plants have the property of essential oil production by their secondary metabolites. Essential oils are the aromatic liquid extracts and volatile oils that are mostly obtained from herbs. Essential oil constituents one of the major groups of agro based industrial products and they find application in various types of industries such as food, beverage, pharmaceutical and cosmetics (Barbara et al., 2010).

Medicinal herbs of folkorigin are significant sources of synthetic and herbal drugs. (2019, Aug 20). Retrieved from https://studymoose.com/medicinal-herbs-of-folkorigin-are-significant-sources-of-synthetic-and-herbal-drugs-essay 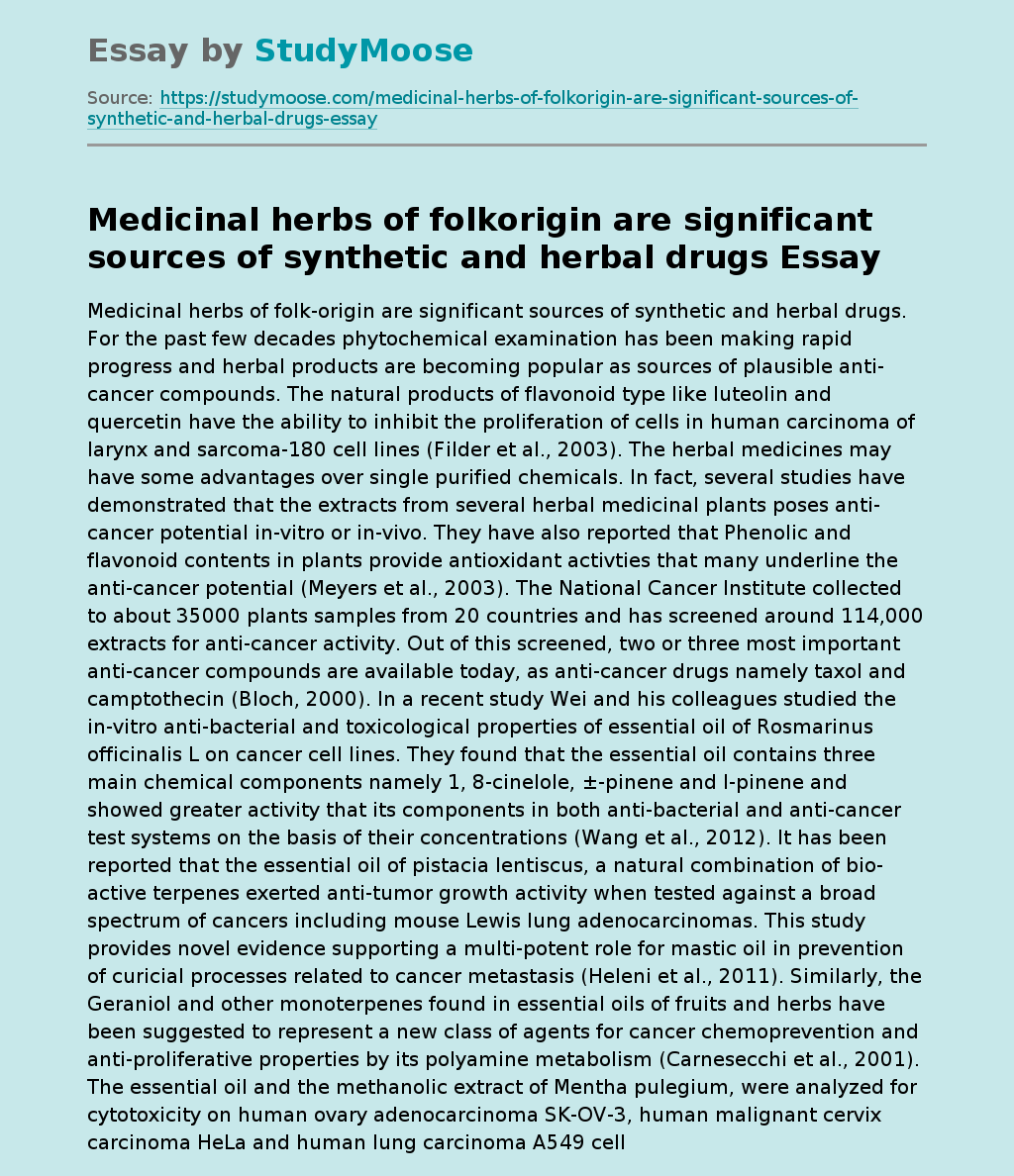