The role of a healthcare professional is to not only to care for those that are sick, but to also promote healthy lifestyles and choices to those in our community. In order to accomplish this task, healthcare professionals must be willing to research and understand the benefits and risks of certain healthcare practices. One such controversy in our society today is the use of medical marijuana.

There is a great variety of opinions on its medical use and its effectiveness in health maintenance.

Don't use plagiarized sources. Get your custom essay on
“ Medical Marijuana Pros and Cons ”
Get custom paper
NEW! smart matching with writer

Many believe the benefits of medical marijuana outweigh the risks associated with its use, whereas others view its usage as controversial and dangerous to the population. The purpose of this ethical debate is to equip patients with well researched data in order for them to make educated choices in regards to their healthcare.

Beneficence is a concept in research ethics which states that researchers should have the welfare of the research participant as a goal. Nurses have the opportunity to advocate to improve patient health and increase patient choice in the use of medical marijuana.

The US Government Accountability Office (GAO) noted the following symptoms or conditions under Appendix IV of their Nov. 2002 report titled ‘Descriptions of Allowable Conditions under State Medical Marijuana Laws’:

Cannabinoids, a chemical substance found abundantly in marijuana, has substantial analgesic and anti-inflammatory effect for users. Marijuana can encourage a patient to enter and maintain time in deep-sleep.

Marijuana extracts, in lab animals, have killed cancer cells and seized growth (Christensen, 2015). Further research is needed, although is showing the possibility for amazing, progressive change in medicine.

The National Academies of Science, Engineering, and Medicine have been doing research on the health effects of cannabis since 1999 and in January of 2017 (Lamp, 2017), and have found significant results. They have concluded that it helps with chronic pain, as an antiemetic, and improving spasticity of multiple sclerosis. Medical marijuana is effective in controlling neuropathic pain, which is harder to control. They found a receptor in the body that is susceptible to cannabis that can help control the pain.

“Elliot, Nabavizadeh, Romer, Chen, Holland (2015) have suggested that medical marijuana is effective in managing symptoms of pain, depression, weight, and altered senses for appetite, when it comes to radiation.” Although radiotherapy can help patients become cancer free, there are long-term side effects that follow. Long term head and neck cancer treatment results in a variety of symptoms including: dry mouth, difficulty swallowing, loss of appetite, pain, depression and muscle spasms (Elliot et al., 2015). Radiation has caused theses symptoms for years now and have been difficult to control. More than 50 percent of head and neck cancer patients have reported that medical marijuana has helped mitigate long-term side effects of radiotherapy. Opioid overdose mortality rates are lower in states that approve medical marijuana.

“Concerns about the link between marijuana use and the use of other drugs may be based solely on opinion; without experimental research, it cannot be concluded that a causal relationship exists between these two phenomena” (p. 23).

There are a number of factors that play into the “gateway” theory, such as, poverty, poor social environment, social group, and certain mental illnesses. An increased amount of negative life factors cause susceptibility to greater drug use. Marijuana is not solely tied to the use of other stimulants or prescription medications. Opioid overdose mortality rates are lower in states that approve medical marijuana (Durkin, 2014).

Veracity is the principle of truth telling, and it is grounded in respect for persons and the concept of autonomy. In order for a person to make fully rational choices, he or she must have the information relevant to his or her decision. Nurses can help to provide the information needed for a patient to make an informed decision on the use of medical marijuana.

“A recent review of the literature revealed that marijuana is associated with a host of possible medical consequences, including cardiac, pulmonary, hepatic, and vascular disorders and elevated risks for infectious diseases and cancer (Gordon, Conley, & Gordon, 2013)” (23).

There is a differential distribution of cannabinoid receptors in the human body. Major organ systems like the brain, heart, liver, and vascular smooth muscle cells. Marijuana use causes tachycardia, vasodilation, increased sympathetic stimulation, elevated blood pressures and increased risk for a myocardial infarction (MI) for one hour post marijuana use (Durkin, 2014). Marijuana use was associated with other unhealthy behavior such as, high-caloric diet, tobacco smoking, human immunodeficiency virus infection, and other illicit drug use, which by itself causes poor health outcomes. In patients who already had an MI, marijuana use more than once a week, tripled their mortality risk.

The body produces naturally occurring substances called endocannabinoids, which could mimic Tetrahydrocannabinol (THC) activity. Endocannabinoids effects occur in both the central and the peripheral nervous system. These endocannabinoids make up the bodies own cannabinoid system called the Endocannabinoid System (ECS). The ECS plays a vital role in the regulation of mood, memory, pain, sensation, appetite, and overall health (Durkin, 2014). When someone smokes marijuana, THC overwhelms the ECS by quickly attaching to cannabinoid receptors. It interferes with cannabinoids normal function resulting in slow communication between cells, therefore, throwing the whole system off balance.

“Marijuana is associated with mental health disturbances, including depression, suicidal ideation in adolescents, anxiety, and psychosis (NIDA, 2014a)” (Durkin, 2014, p. 23). Marijuana can cause an addiction and anxiety that could eventually lead to the use of other drugs. Addiction can lead to mental health disturbances including depression and anxiety. The user will eventually associate the use of drugs with a false sense of contentment. An inability to obtain their “only source of happiness”, drugs, causes many users to fall into an emotionally unstable, and often suicidal state of mind.

“The World Health Organization (WHO, 2014) reports that chronic use of marijuana can lead to impaired cognition, exacerbation of schizophrenia, and damage to the trachea and bronchi” (Durkin, 2014, p. 23). Tetrahydrocannabinol (THC), the active chemical in marijuana, affects receptors in the user’s brain. These receptors can cause a harmful effect in a person’s cognition and perception. Early exposure to marijuana affects the structural and functional integrity of the hippocampus, resulting in impaired learning and memory (NIH, 2017). Marijuana can cause inflammation to the trachea and bronchi which could lead to damage.

“[The] use of [marijuana] during pregnancy may adversely affect fetal development (WHO, 2014) and elevate the risk of neurobehavioral difficulties in infants (NIDA, 2014a)” (Durkin, 2014, p. 24). Marijuana is a drug that could prevent the cells of the fetus to grow correctly. In utero, exposure to marijuana, will cause later dependency and neurobehavioral problems. This may cause an infant to miss their developmental milestones and have difficulties with concentration, and anxiety in the future.

Medical marijuana is something of controversy, but research is being continued. The evidence that has been provided above about the pros and cons helps to see the beneficence of medical marijuana and the principle of veracity. It is vital that patients understand true information about medical marijuana in order to make decisions on their health care and in order for it to benefit them. As evidence shows, medical marijuana provides pain relief and can help with long term side effects of radiation therapy. However, one must look at how the risks may outweigh the benefits. Medical marijuana, as evidenced above, can increase the risk of mortality with those who have health problems, can cause mental health disturbances such as addiction and anxiety, can affect one’s cognition and perception, and can affect fetal development. Just as there have been problems with opioid use, there can be problems with medical marijuana use because people do have their agency and my not use it as prescribed. Nurses are to promote a healthy lifestyle and choices, and with more research there may be more benefits than risks to come. 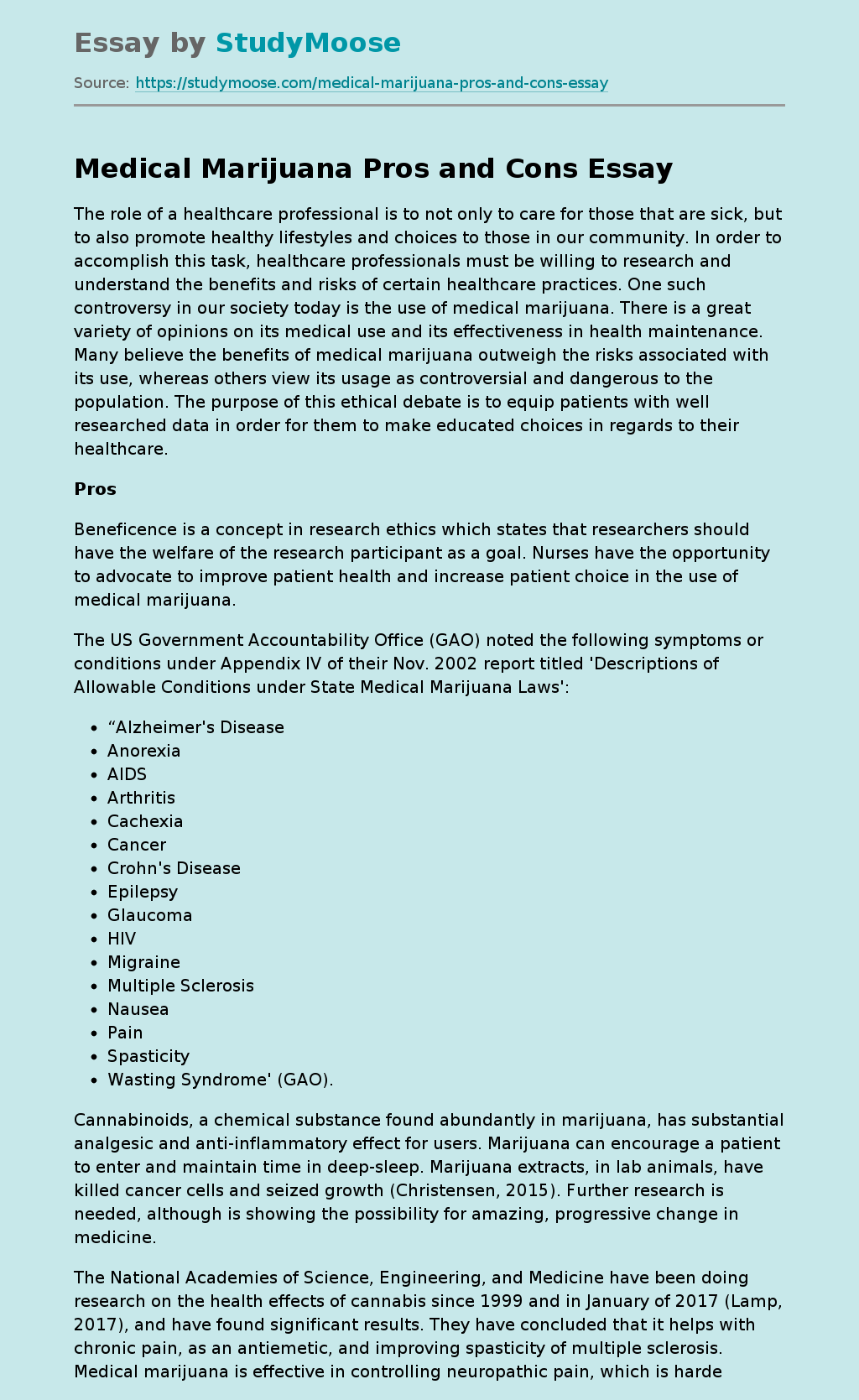