People of different cultures have long used plants, especially those with therapeutic values. They believe plants to have healing powers. In most parts of our country, many people have embraced the powers of plants in their daily lives. Modern medicine has downplayed the importance of this traditional knowledge, but now it has begun to acknowledge the value of using plants for medicinal purposes. Plants supply the phytochemicals of the healing system needed by the body. Phytochemicals are secondary metabolites that are scientifically known as the bioactive constituents with therapeutic activity.

Don't use plagiarized sources.
Get Your Custom Essay on Mayana Leaves Just from $13,9/Page

They are non-nutritive plant chemical that contain protective, disease-preventing compounds. Thorough screening and analysis of these medicinal plants may expose the bioactive components responsible for their healing capacities.

This screening involves processes like extraction, purification and characterization of the active constituents of pharmaceutical importance. The Philippines takes pride of its rich natural resources and its flora offers an abundant source of medicinal plants. Production and utilization of local plants with phytochemical properties must be given vital importance since there is an immense chance that locally produced and less expensive drugs can be sourced from them.

This may also pave the way for the discovery of novel compounds and locally made drugs that can compete in the global market. Mayana (coleus sp. ) is a traditional plant used to dress cuts and bruises, because of this, we have decided to do a phytochemical screening. The project hopes to find in mayana, value as a new tool in modern medicine at the very least, increase the general knowledge about the plant. The extract will be made by preparing a solution of crushed plants in 80% ethyl alcohol.

The leaf and stem extract were screened for the presence of alkaloids, flavonoids and anthraquinones. The assay was done by the paper disc method of assay. Different concentrations of the extract will be assayed against different kinds of bacteria. The screening showed that the stems contained considerable quantities of alkaloids. The results of the assay showed that tradition holds true in the laboratory as the leaf extract strongly showed signs of antibacterial activity. The reverse was true for the stems as they were found out to facilitate bacterial growth instead of impeding it. Future researches may include identification of the specific kind of flavonoids, alkaloids and quinones present on the plant and their specific effects. They may also try to utilize the bacterial activity of the stem to make a mayana stem-based nutrient agar.

Before proceeding with our choice of plant, we did a survey to determine the plants that are used by an “albularyo” or quack doctor in treating his/her patients. A folkloric survey has been prepared by the researchers and the questions used were given by the professor. The folkloric survey prepared aims to determine the a) the plants that the albularyo still uses at present, b) the medicinal purposes of those plants stated by the albularyo, c) the part of the plant that is used by the albularyo and d) the proper method of using the plant medicinally and the recommended dosage. We searched for an albularyo in local/rural areas. The community that we chose is located in Bataan.

We collected about 50 grams of mayana leaves from the local or rural area. We washed it with clean water and drained off the excess liquid. After, we air dried them for one week or until the leaves are brittle making sure that they are constantly aerated to prevent the accumulation of fungi on the leaves. After air drying, the leaves were cut into small pieces. The small pieces of leaves were soaked for two days into a 500 ml beaker containing 200 ml ethanol.

After 2 days of soaking the leaves, we extracted the leaves using filtration. We used a glass funnel with a filter paper that is placed on a tripod for easier use. A beaker was used to collect the extract. The leaves were filtered in the funnel with the filter paper. After filtration, we obtained the filtrate in the beaker. The first layer of the liquid was removed through decantation until the extract was obtained and ready for analysis.

The extract that we obtained through decantation was tested for the presence of phytochemicals using thing layer chromatography. A TLC plate was given to us which measures 2 cm x 7 cm. Using a pencil, we marked the TLC plate 1 cm from the top and 1 cm from the bottom. And then, we applied the plant samples in the bottom mark by blotting through the use of a capillary tube. The blot should be at least 2 mm in diameter but not more than 5 mm for it to climb up the TLC plate. After, we prepared solvent systems to determine the best solvent system for our plant extract.

In the preparation of the solvent systems, we used hexane and ethyl acetate. There were 3 ratios used: 9:1, 7:3 and 6:4. Three TLC plates with the blotted plant extract were placed inside the developing chambers lined with filter paper and covered by a petri dish. The chambers were saturated first with 10 ml of the solvent using the 3 ratios to allow the solvent to move up the lining while covered before placing the blotted TLC plates.

After, the three TLC plates were placed inside the 3 developing chambers and it was kept covered until the solvent climbed up and reached the upper mark. At first, ours didn’t show any results and we did several tests. Finally, the blotted TLC plate in the 9:1 ratio traveled through the TLC. And in our test, the 9:1 ratio was the best solvent system for our sample.

After obtaining the best solvent system to be used, we did another developing chamber with the 10 ml solvent. Just like what we did, we put the 9:1 ratio (10 ml solvent) in the beaker and lined it with filter paper to saturate the chamber. We were given two TLC plates, the other having three blots and the other having four blots, a total of seven blots. The TLC plates were placed in the developing chamber and waited for the solvent to reach the upper mark. There is a visible spotting or separation of the components in our TLC plates and then we proceeded with the spray reagent tests.

The TLC plates were cut into seven pieces with the seven blots. Our professor assigned each group with a spray reagent. After doing the spray reagent tests, we obtained the results in our chromatograms. We obtained for positive results in: Phenols, Coumarins, Anthranoids, and Anthraquinones. The results were written in the data sheet provided.

In the mayana leaves extraction, this was the leaves soaked in 200 ml ethanol. From this solution, we obtained the plant extract from the mayana leaves that we used for the phytochemical screening. In the second picture, the blotted TLC plates, this was done by using the capillary tubes to put the extract in the TLC plate. At the third picture, this shows the TLC plates in the developing chamber with the 10 ml solution which was 9 ml hexane and 1 ml ethanol. Lastly, after the spraying of reagents in the TLC plates, we obtained the results above. The positive results that we obtained are – Phenols, Coumarins, Anthranoids and Anthraquinones, respectively.

According to our results, mayana plant had blue spots which indicate a positive result with phenols. Phenols have anti-inflammatory and anti-oxidant properties which is the same as the mayana plant. Phenols also have antiseptic and it may be present in minimal amount. It also gave a blue zone which tells us that it constitutes coumarins. This indicates that it can be used in wounds. It had yellow zone which shows positive result with anthranoids. Anthranoids can be taken when you have constipation which is the same property as mayana. Orange-violet color was obtained in mayana plant which indicates the presence of anthraquinones. Like phenols and anthranoids, it can be used as anti-inflammatory and for constipation. Some scientists have demonstrated that some derivatives have activity in vitro against some parasitic species.

This plant is also commonly used as an ornamental plant due to its purple foliage. Mayana can grow in different habitats. It is one of the traditionally used folklore medicine and it is primarily used for pain, sore, swelling and cuts and other instances as adjunct medication for delayed menstruation. A chemist from the University of the Philippines isolated sterols and triterpenes from leaves of mayana and it exhibited analgesic, anti-inflammatory and antimicrobial activities. Another interesting component of the plant is its high rosmarinic acid content. This compound was noted for its biological activities; prominent of those are its anti-inflammatory and anti-oxidant properties.

Lastly, we also found out that mayana has its anti-bacterial, anti-fungal, anti-protozoal and cytotoxic extracts of mayana. Therefore, mayana is a herbal medicine that you may use in wounds, headaches, fever and bruises just like what is said in the survey.

Mayana Leaves. (2016, May 06). Retrieved from https://studymoose.com/mayana-leaves-essay 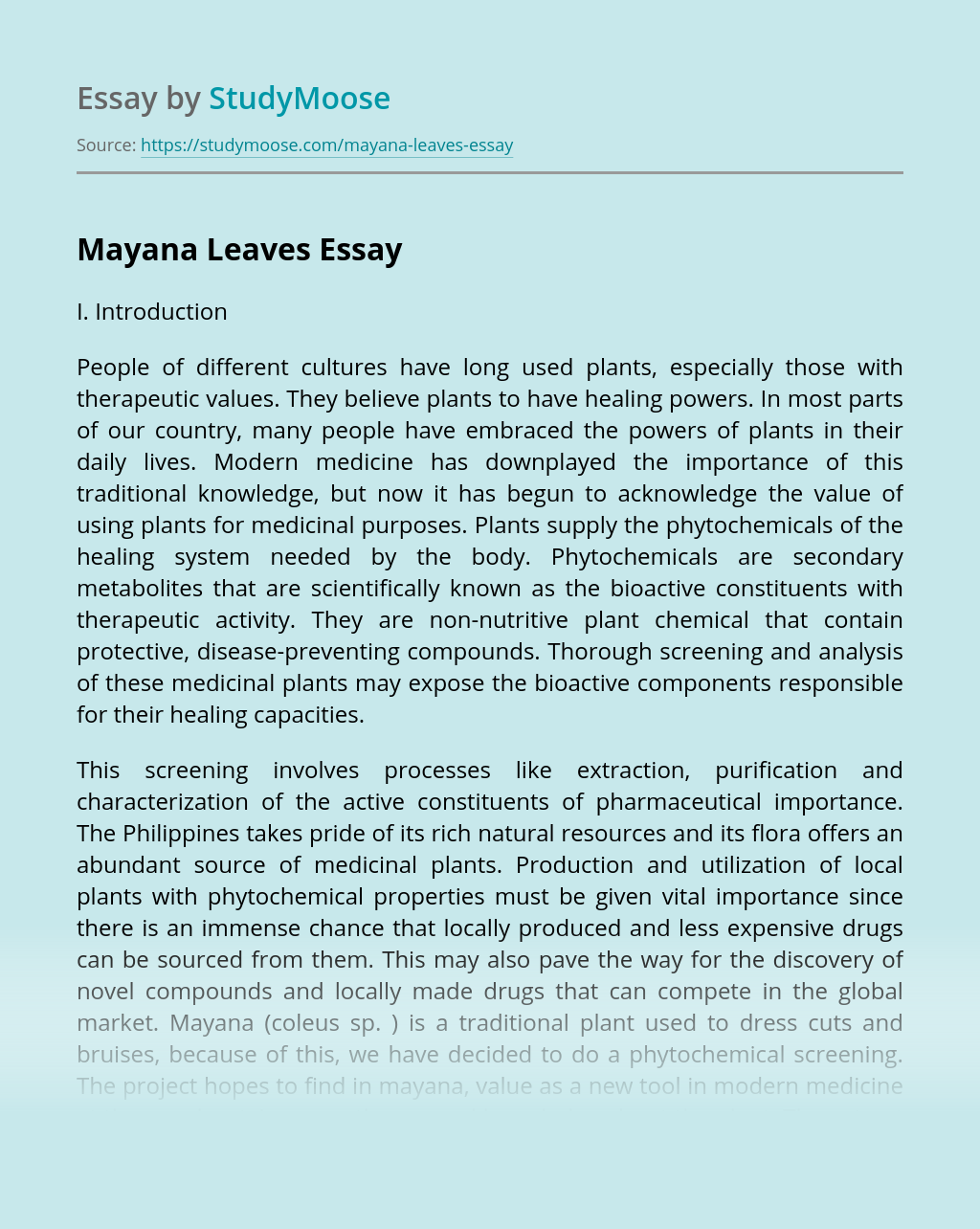 Access to health is an essential right of all people (WHO; 2004). If all individuals had access to healthcare then no variations would be found between various groups. However, according to Giddings (2005) the health status of groups in different countries is not comparable and have expanded between groups because some groups are marginalised and...

Imagine a world where anyone, even the curably ill or depressed, is easily assisted in suicide. Where someone else decides when you’re life is no longer worth living. Where it is a societal expectation to die rather than receive long-term care. Ladies and Gentlemen, this is the world that awaits us if we legalise euthanasia....

The intended use of medications is meant to improve a person’ health, it is very important the individual administering medication or self-medicating use the drugs correctly, by following the doctors’ instruction for the medication prescribed. Medication is given to diagnose, treat, and prevent illness. Medication can be very dangerous, which can potentially cause harm or...

The LIMS system allows laboratories and other industries, to insert information in the electronic format that is required in order for it to function for it to function and generate the working system. This allows other users and participants to insert relevant data in mandatory fields, this could be things such as name, date of...

Today the cause and effect of medical billing and coding is that they share a relationship because they each share something similar in a way. They are both understood when they are spoke about. But as you know billing and coding are and can be combined together as well. But what I would like my...