As the title implies, guava leaf is the main subject for this research. Little had been known that the leaf of this plant has tannin/tannic acid that constitutes to the healing progress of the wound. The researchers would determine the difference between the ointment and the tincture made of guava leaves. This study will be limited to heal specific types of wounds such as abrasion & superficial wounds, exception were people with healing incapability. The experiment would only last for a specified time span of 3-4 days.

Turn in your highest-quality paper
Get a qualified writer to help you with
“ Wound Healing and Guava Leaves ”
Get high-quality paper
NEW! AI matching with writer

The researchers had hypothesized that guava ointment can accelerate wound healing faster than the tincture due to the concentration of the leaf extract. In making the ointment, the leaves must be washed, chopped and extracted with the use of oil. Added into it was melted candle wax. The product was been put into a sterile container and solidified. While in making tincture, add a cup of gin to the chopped guava leaves.

The researchers conducted the experiment in two different people with the same kind of wound. After 4 days, they concluded that the ointment was way better than the tincture because of the extract’s concentration and the nutritional status of the specimen.

Among the various kinds of wound remedies, the use of herbal plants is very much common and mainly widespread. Herbal plants are not only effective but also cost-efficient. The World Health Organization ( WHO ) has recognized 20,000 plant species with medicinal properties providing several treatments for ailments such as pneumonia, ulcers, diarrhea, colds, and also wounds.

This list of plant species includes guava plant ( Psidium guavaja ), coming from the Myrtaceae family, that was profound to be one of the healing agents when it comes to wounds. Guava plant seems to be very varied in terms of its usage. The different parts of its body have their different functions. The researchers focused on tannic acid that can be found in the leaves of the said plant. This kind of compound can accelerate and heal wounds. There were also various classifications on the different kinds of wounds. The researchers would only conduct the experiment on abrasion or superficial wounds which would be classified accordingly as they go along with the research.

* Background of the Study

Guava ( Psidium guavaja ), a native fruit coming from Mexico, Central & South America, and throughout Southeast Asia, was been used in the past as a folk medicine by the so-called witch doctor in certain operations such as circumcision to eliminate certain bacteria or other microorganisms from spreading through the freshly-open wound. At around mid-1900’s, many preliminary medical researchers from laboratories discovered that extracts coming from the leaves of this plant may contribute to the therapeutic mechanisms against diseases like cancer, inflammatory problems, bacterial infections, etc. The researchers had come-up with this kind of study because they had researched that out of guava leaves contains a polyphenolic compound called tannic acid which can accelerate blood clotting, a factor in which can heal wounds. They would prove how this compound/agent constitutes to wound healing by having two different processes involved.

* Statement of the Problem

This study aims to determine the effectiveness of both the tincture and ointment made of guava leaves and also the leaves itself on wound healing. It will answer the following set of questions:

* Significance of the Study

The purpose of this study is to collect as much information the researchers can gain to prove that the guava leaves can heal wounds by using the recent studies concluded by the other researchers and by their own data through with further enhancing of knowledge. The researchers aim to innovate and create new product/s out of guava plant specifically its leaves, producing an alternative material compared to harmful skin remedies. In this study, the researchers would be focusing on differentiating and observing the effectiveness of the tincture and ointment in healing. Lastly, the researchers’ objective is to contribute to our society the knowledge they will gain from this research to be further enhanced in future time. * Scope and Limitation of the Study

This study limits itself to only heal specific cases of wounds such as on accidental wounds & abrasion/superficial wounds. Exception to this study includes those people suffering from diabetes or those who were experiencing longer period of regenerating or healing incapability. The researchers will conduct their observation for 3-4 days. The individuals who will be part of the experimentation are those who don’t have any serious conditions ( e.g diabetes ) which may affect the normal healing process but have different nutritional status. The usage of proper gears such as latex gloves and other sterile materials are needed to sustain the components of the product/s and its possible effects.

Guava leaf ( Psidium guavaja ) is one of the parts of the said tree which has its abundant functions. The leaf was used by the rural folks to a procedure called “hunad” to wash ulcers and wounds. This was been an alternative antiseptic to those people who have less access to commercially-produced antiseptics & antibiotics. ( D.J.S. Manriquez, 2008 ) The 5-10 centimeter-long-oblong leaves, together with its roots, contain a large percentage of tannic acid and other compounds such as cineol and quercetin. The essential oil coming from the leaves was been proven to utilized anti-inflammatory property for 58.27% percentage inhibition. ( A. C. Dweck )

A polyphenolic compound that is commonly found in plants specifically in the leaves, bark, stems, bud and seed of the plant. It has been discovered to utilize antibacterial, antiviral, antiparasitic, and antioxidant properties. ( E. Villablanca ) Aside from its promising positive effects mentioned, tannin has been used to utilize blood clotting which can results into good blood circulation, accelerating and healing of wounds. It is also beneficial for those who have cancer, ulcer, and other inflammatory cases with due therapeutic applications. ( Wikipedia.org )

A salve used primarily applied on the skin. (The Merriam-Webster Dictionary; p.504) It is an oil-based preparation that is immiscible or that is incapable of mixing with skin secretions. (Wikipedia.org)

A tincture is mainly an alcoholic solution made of plant or animal product that is used for medications. It is composed of ethanol which is 40-60% alcohol. (Wikipedia.org) * Wound ( D.J.S. Manriquez, 2008 )

The following factors that affect wound healing according to Luckmann and Sorensen ( 1988:85-89 ) includes: Age. Exposure to ultraviolet rays constitutes to the decreased blood perfusion done by the body to our skin. Healing is faster and less complicated when it comes to younger people. Nutritional Status. Body functioning most likely to occur to well-nourished persons than with malnourished. Well-nourished persons may be able facilitate healing process because of nutritional reserves. Wound healing in obese people performs slower because of poor perfusion. Tissues Involved. Tissues with better blood supply throughout the body heals faster. Wounds on hand and head heals faster than on legs and feet. Wound Treatment. Medicinal plants that are abundant in the Philippines play big significance considering its availability in the country and amid of its costs.

Methodology:
* For making Guava leaves tincture:
1. The guava leaves were finely chopped using a mortar and pestle. 2. A cup of white wine or gin was added to a glass of guava leaves. 3. The preparation was shook everyday for about a week.

6. The white candles were cut into small pieces.
7. The liquid ( guava leaves extract ) was reheated in heated pan. The chopped candles were poured into the pan, stirred until it melts. Add the fragrant oil. 8. The heat was turned off after the wax had melted. The liquid was quickly transferred into the container. Let the mixture be cooled and solidified.

Ointment ( MC 1)| There is an irritating sensation from the wound.| There is a formation of thin blood clot.| Formation of blood clot filled the wound.| Irritating feeling and shedding of blood clot. Nearly healed.| Tincture( MC 2)| There is no improvement.| There is a little irritating feeling felt by the person.| Little patches of blood clot.| Not totally healed.| The table shows the result/effect of each product to the experimental organisms. For each succeeding days, the researchers experimented the tincture and the ointment on two different people with the same kind of wound. The ointment was experimented and observed on a well-nourished girl named MC 1 while the tincture was done on an obese guy named MC 2.

The experimentation happened everyday at exactly 4:30 in the afternoon for MC 2 while the experimentation for MC 1 happened every 5:00 in the afternoon. The tannic acid, that was present in the guava leaves contributes to the healing process of the wound but depends mainly on how it was been processed. Different methodologies were made to produce two different products which were used to discover the effectiveness of guava leaves in wound healing. The researchers’ data shows the healing capabilities of the tincture and ointment towards wounded people. MC 1 has the greater healing process than MC 2 due to the difference between the products used applied in the wound.

The concentration of guava leaves extract to the ointment improves the healing capability of the said product than with the chopped raw leaves in guava tincture. Nutritional status of the organism is also a factor in the healing process of the skin. Because MC 2 has an obese status, the experimentation resulted into a slow wound healing. It was explained that blood perfusion was slower in obese people, which may slow down the regeneration of the skin continuity. And that was contrary to the result gained by MC 1, which is well-nourished than MC 1.

Further researches about the usage of guava leaves in making different kinds of pharmaceutical or therapeutic mechanisms can be of help to enhance this study and also improving the quality of guava leaves tincture and ointment into something more useful and productive. Innovation of a broader perspective about the main functions of the different parts of guava tree may help our society in certain health-related problems.

Wound Healing and Guava Leaves. (2017, May 29). Retrieved from https://studymoose.com/wound-healing-and-guava-leaves-essay 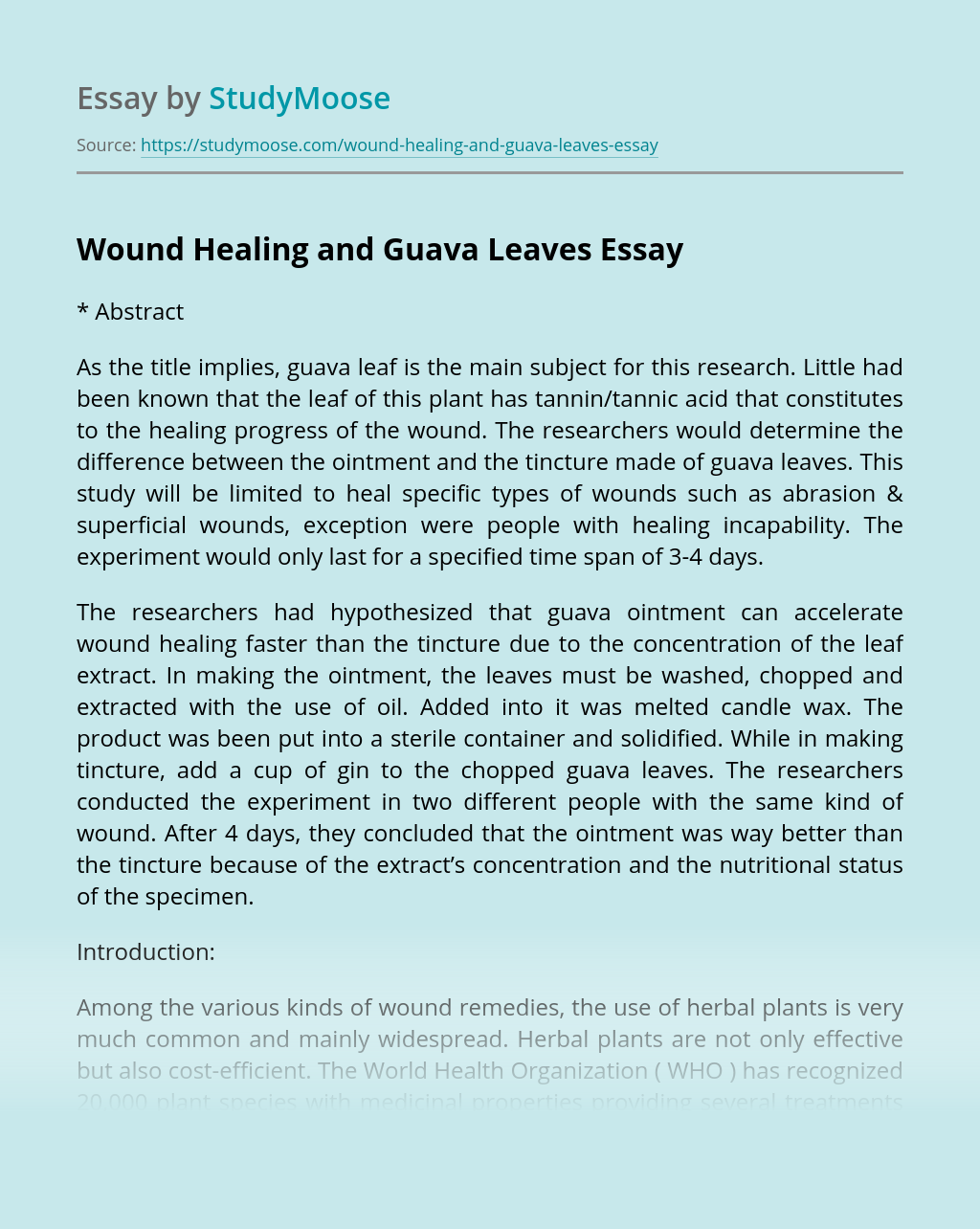 Turn in your highest-quality paper
Get a qualified writer to help you with
“ Wound Healing and Guava Leaves ”
Get high-quality paper
Helping students since 2015
Stay Safe, Stay Original