Matters of Life and Death

In a new book, A Miracle and a Privilege, Dr Francis Moore, 81, of Harvard Medical School, discusses a lifetime of grappling with the issue of when to help a patient die. An excerpt: Doctors of our generation are not newcomer to this question. Going back to my internship days, I can remember many patients in pain, sometimes in coma or delirious, with late, hopeless cancer. For many of them, we wrote an order for heavy medication – morphine by the clock. This was not talked about openly and little was written about it.

Turn in your highest-quality paper
Get a qualified writer to help you with
“ Matters of Life and Death ”
Get high-quality paper
NEW! AI matching with writers

It was essential, not controversial The best way to bring the problem into focus is to describe two patients whom I cared for.

The first, formerly a nurse, had sustained a fractured pelvis in an automobile accident. A few day later her lungs seemed to fill up, her urine stopped, her heart developed dangerous rhythm disturbances. So there she was: in coma, on dialysis, on a breathing machine, her heartbeat maintained with an electrical device.

One day after rounds, my secretary said the husband and son of the patient wanted to see me. They told me their wife and mother was obviously going to die, she was a nurse and had told her family that she never wanted this kind of terrible death, being maintained by machines.

I told them that while I respected their view, there was nothing intrinsically lethal about her situation. The kidney failure she had was just the kind for which the artificial kidney was most effective.

While possibly a bit reassured, they were disappointed. Here was the head surgeon, seemingly determined to keep everybody alive, no matter what When patients start to get very sick, they often seem to fall apart all at once. The reverse is also true. Within a few days, the patient’s pacemaker could be removed, and she awoke from her coma. About six months later I was again in my office. The door opened and in walked a gloriously fit woman. After some cheery words of appreciation, the father and son asked to speak to me alone. As soon as the door closed, both men became quite tearful. All that came out was, “We want you to know how wrong we were” The second patient was an 85-year-old lady whose hair caught fire while she was smoking. She arrived with a deep burn, I knew it would surely be fatal.

As a remarkable coincidence, there was a similar going on at the time in medical ethics, given by the wife of an official of our university. She asked me if I had any sort of ethical problem I could bring up for discussion. I described the case and asked the students their opinion. After the discussion, I made a remark that was, in retrospect, a serious mistake. I said, “I’ll take the word back to the nurses about her, and we will talk about it some more before we decide”. The instructor and the students were shocked: “You mean this is a real patient?”

The teacher of ethics was not accustomed to being challenged by reality. In any event, I went back and met with the nurses. A day or two later, when she was making no progress and was suffering terribly, we began to back off treatment. When she complained of pain, we gave her plenty of morphine. A great plenty. Soon she died quietly and not in pain. As a reasonable physician, you had better move ahead and do what you would want done for you. And don’t discuss it with the world first. There is a lesson here for everybody.

Matters of Life and Death. (2016, Jun 07). Retrieved from http://studymoose.com/matters-of-life-and-death-2-essay 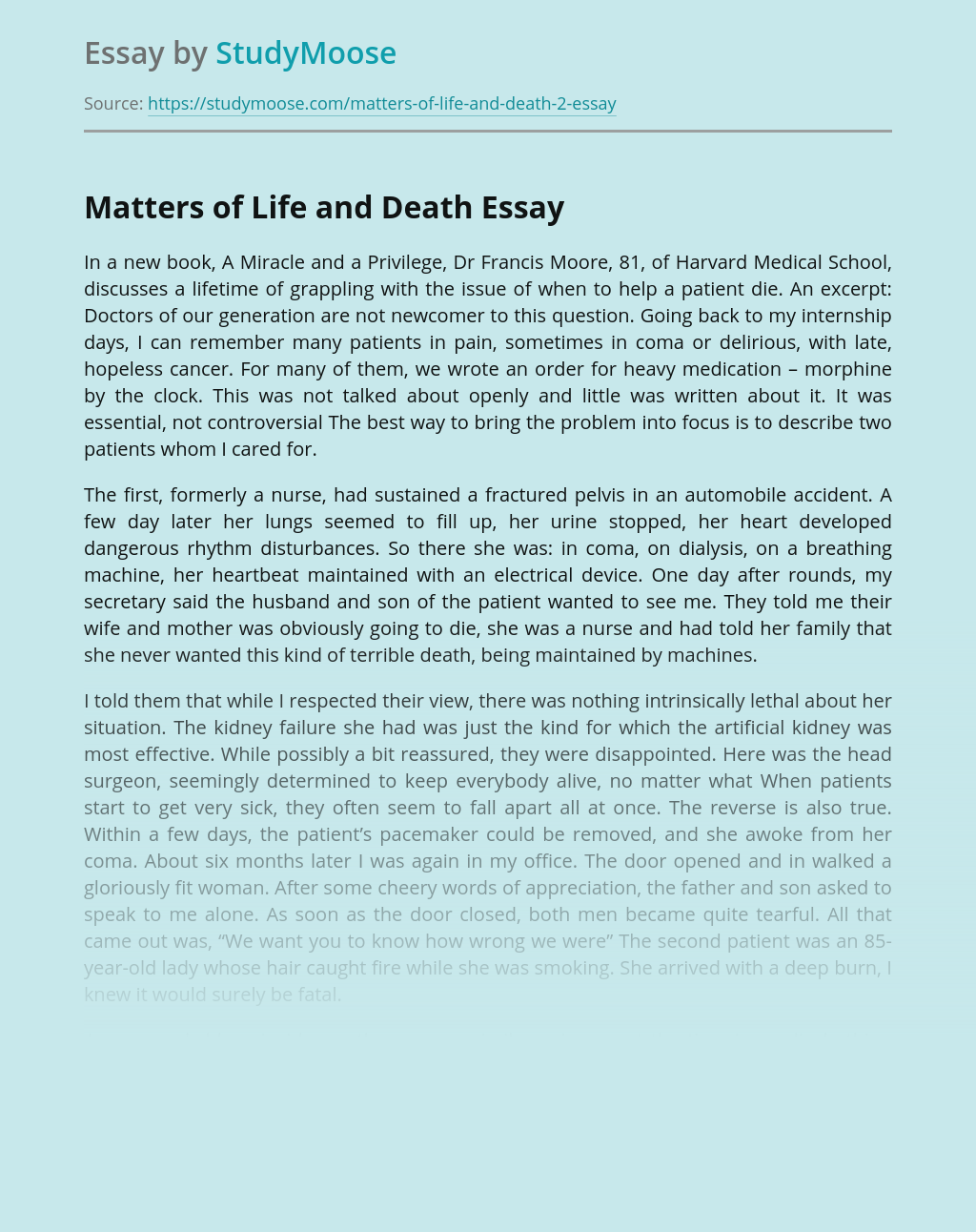 Turn in your highest-quality paper
Get a qualified writer to help you with
“ Matters of Life and Death ”
Get high-quality paper
Helping students since 2015
Stay Safe, Stay Original