Mateo Falcone Author: Prosper Mérimée Introduction Sept. 28, 1803, Paris — died Sept. 23, 1870, Cannes, France A French dramatist, historian, archaeologist, and master of the short story whose works — Romantic in theme but Classical and controlled in style — were a renewal of Classicism in a Romantic age. Story: Mateo Falcone This opera constitutes the last of three short serious operas by this composer, the other two being Feast in Time of Plague and Mademoiselle Fifi. “Mateo Falcone” addresses matters of family honor. It is set in Corsica in the seventeenth century in the region of Porto-Vecchio.

Don't use plagiarized sources.
Get Your Custom Essay on Mateo Falcone by Prosper Mérimée Just from $13,9/Page

Setting Mateo Falcone Characters Fortunato Falcone Mateo Falcone’s ten-year-old son. His father regards him as ‘‘the hope of the family.’’ The name Fortunato, meaning ‘‘the fortunate one,’’ reflects his father’s pride. cont.

Story: Mateo Falcone Prosper Mérimée’s “Mateo Falcone” (1829), originally subtitled “Les moeurs de Corse” (“The Ways of Corsica”), chronicles the killing of a ten-year-old boy by his father. Such contemporaries as Stendhal (Henri Beyle), Henry James, and Walter Pater admired Mérimée and praised him for his craft.

Pater called “Mateo Falcone” “the cruellest story in the world.” “Mateo Falcone” is a brief, but complex story. It features at least five points of view and at least four “ways of life” (the “moeurs” of the original subtitle). Mérimée’s themes include betrayal and honor, savagery and civilization, vendetta and law, and custom and morality. A forty-eight-year-old father of three married daughters and one ten-year-old son; Giuseppa Falcone’s husband. Giuseppa Falcone Mateo Falcone’s wife. Tiodoro Gamba The adjutant; a distant relative of Falcone’s. Gianetto Saupiero An outlaw. Exposition Plot Summary “Mateo Falcone” is set in Corsica in the seventeenth century in the region of Porto-Vecchio, which is midway between the town of Corte and the mâaquis, the wild country of the Corsican highlands where outlaws and misfits find refuge from law and authority. Mateo Falcone, a forty-eight-year-old father of three married daughters and one ten-year-old son, is a successful sheep rancher.

He sets off to gather his flock one afternoon. His wife, Guiseppa, accompanies him, and they leave their son, Fortunato alone. Rising Action Fortunato daydreams in the autumn sun. He anticipates going into town in a few days to have dinner with his uncle, the Caporal. Suddenly, he was distracted by the gunshots echo from nearby. On nearby path, a wounded man appears and had been shot in his thigh. Seeing Fortunato, he asks whether the boy is the son of Mateo Falcone, after confirming, he introduces himself as Gianetto Saupiero, the implication being that he has a tie to Falcone and thus a right to expect asylum. Fortunato at first declines to hide Gianetto, but when the bandit offers a piece of silver, the boy conceals him beneath the hay. Climax Six soldiers arrive, led by adjutant Tiodoro Gamba, who addresses Fortunato as “cousin,” once again implying a tie to the Falcone’s. Gamba wants to know whether Fortunato has seen a man on the trail. Fortunato evades Gamba’s questions, and Gamba suspects that the boy is in complicity with Gianetto.

He threatens to beat Fortunato, but the boy only replies that he is Mateo Falcone’s son, and the lieutenant understands that he dare not harm Fortunato for fear of angering the father. The soldiers search the property but find nothing. Finally, Gamba attempts to bribe Fortunato with a shiny new watch. Fortunato accepts the bribe and silently nods in the direction of the haystack. Falling Action Mateo and Guiseppa return from the pastures. Gamba advances cautiously and explains to Mateo what has happened. When Mateo ascertains the facts, he abruptly asks his wife whether the boy is really his child. Fortunato collapses in tears, sobbing and crying, and the wife becomes hysterical. Mateo commands Fortunato to leave with him into the high country.

Denouement As Mateo and Fortunato climb into the mountains, Guiseppa prays inside the house to an icon of the Virgin Mary. In a ravine, Mateo commands Fortunato to kneel and say his prayers. When he finishes praying, Fortunato begs for mercy, but Mateo gives none. He raises his rifle and shoots. Theme Analysis Justice prevails. The end justifies the means.

Mateo Falcone by Prosper Mérimée. (2017, May 24). Retrieved from https://studymoose.com/mateo-falcone-by-prosper-merimee-essay 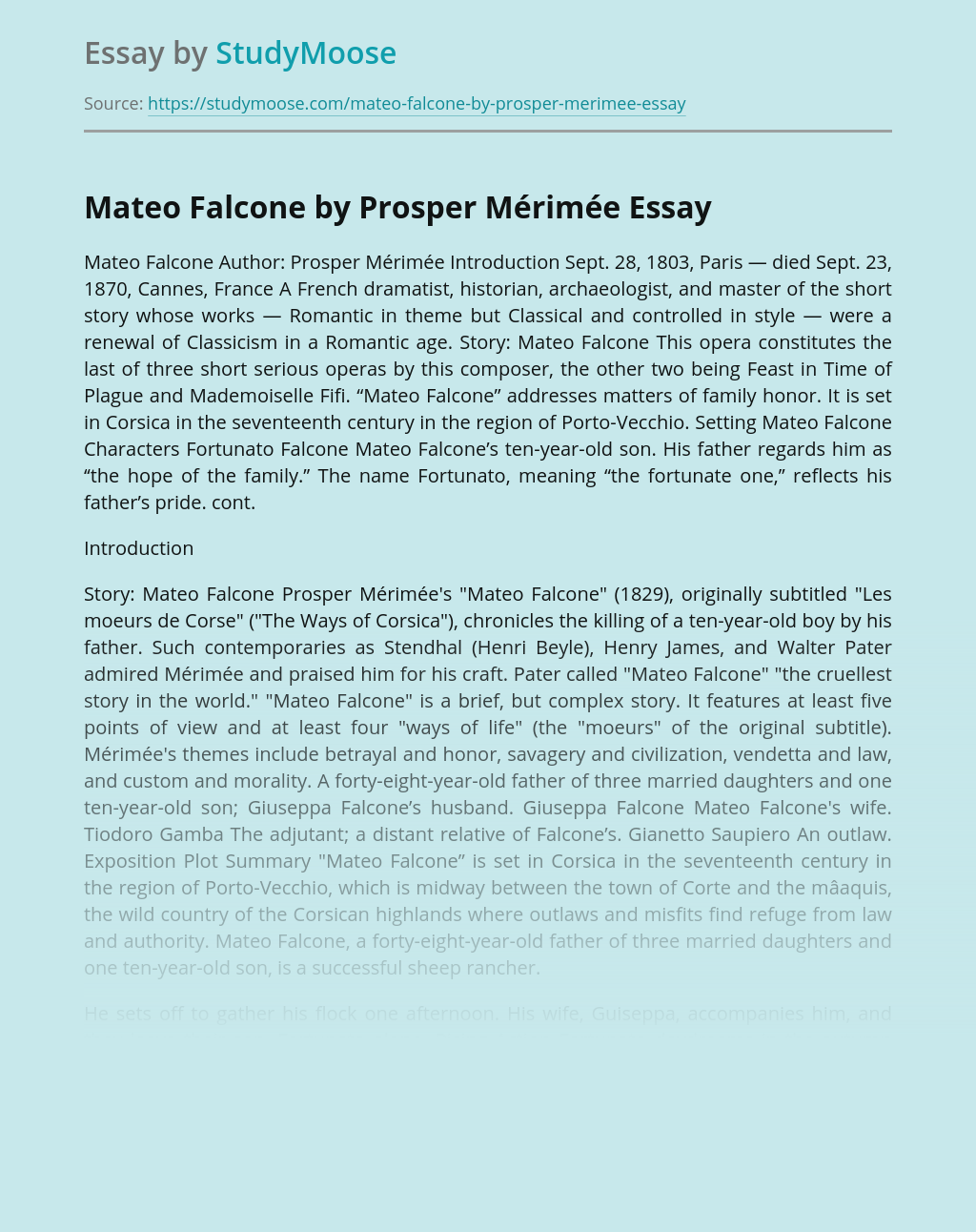 Essay topic: Runner shows that even though the world can be harsh and miserable, there are good people out there who make life worthwhile. Runner, by Robert Newton, is set in the slums of Richmond 1919 and also happened to be the home of the infamous gangster, Squizzy Taylor. The novel is about a 16...

View sample
Get Essay
The Effect of Poor Family Relationship

Through my life, I have had a few favorite places, but my overall favorite place is sitting in my front yard. A favorite place to me one that you can enjoy and relax, where you are at peace. This essay is about my favorite place, as I will tell you why it is. Sitting in...