1. Abstract Maslow’s hierarchy of needs is a motivation theory elaborated by a humanistic psychologist Abraham Maslow in 1943. Maslow’s theory consists of 5 main levels of needs that form a pyramid: Physiological, Safety, Belongingness and Love, Esteem, Self-Actualization (Janet A. Simons, 1987). Even though this theory is most commonly used in individualistic cultures, some findings suggest that it may also be applied in collectivist culture. However, the results will differ from those in individualistic cultures. In a collectivist culture, the basic need is belonging to the society; self-esteem is eliminated, and self-actualization is attained in terms of meeting societal development needs (Gambrel, P.

Turn in your highest-quality paper
Get a qualified writer to help you with
“ Maslow’s theory of needs in individualistic and collectivist cultures Malika Kassymova ”
Get high-quality paper
NEW! AI matching with writer

A.& Cianci, R., 2003). Thus, contrary to the belief that the basic concept of self-actualisation applies to any human being in any culture, the current findings suggest that an individual’s needs are partially bound by culture. Implications include important impact on the workplace, as the concept of self-actualization shouldn’t be forced upon a collectivist culture and vice versa (Nevis, 1983).

2. Introduction 2.1 Review Most famous authors that have investigated international implications of Maslow’s hierarchy of needs include Geert Hofstede, Edwin C. Nevis. Other individualism-collectivism studies by Hampden-Turner and Trompenaars, Schwartz, Bilsky, Ivtzan and Tanaka have a direct relation to theories of motivation as well.

2.2 Purpose The purpose of this literature review is to organise, compare and synthesize academic papers related to the Maslow’s theory of motivation and to indicate the sources of obtained data.

3. Application of Maslow’s theory in individualistic and collectivist cultures 3.1 Beginning of studies Individualism – collectivism is one of four dimensions of culture in different countries developed by Geert Hofstede.

According to (Hofstede, National Cultures in Four Dimensions, 1983), in an individualistic society individuals look after themselves and immediate family members. He defines collectivism as a preference for a close social framework where family members and other in-group members look after them in exchange for loyalty; individualism, on the contrary, refers to a more self-oriented approach to socialization. 3.2 Methodology & Findings

Source: www.geert-hofstede.com In a recent study (Ivtzan, 2010) the cultural validity of self-actualization is tested using the Personal Orientation Inventory (POI) questionnaire developed by (Shostrom, E.L, 1980) as a comprehensive measure of the self-actualizing characteristics originally highlighted by Maslow. The POI questionnaire was tested on 100 British participants and 100 Indian participants as these two cultures belong to 2 different cultures (Hofstede, geert-hofstede.com, 2004). In support of the hypothesis, the results showed British participants scored significantly higher than the Indian participants on 10 out of the 12 scales, meaning that Individuals from an individualistic culture are more likely to be closer to the self-actualizing ideal, as measured by these scales, than individuals from a collectivistic culture.

Thus, one’s cognition and motivation are affected by the social system in which they are raised and fulfilling one’s potential is expressed differently in these cultures. Collectivistic cultures are more ‘other orientated’ with strong emphasis on approval, acceptance and adherence to social groups (Erez & Earley, 1993). In support of this, Tanaka (1978) tested individualistic and collectivistic differences in agreeable responses to various behavioural statements. For example, in response to the statement “To do something good for society”, participants from Indonesia, Pakistan and India scored the highest and those from Australia and New Zealand the lowest.

However, in response to the statement “To achieve personal happiness”, the pattern of results was reversed. Similarly, Riesman et al (1953) describe that the other-directed person “hardly thinks of himself as an individual” (p.33) further suggesting that collectivists that define themselves in such an ‘other-directed’ way are less likely to be inner orientated than individualists. Therefore, prestigious companies such as Royal Bank of Scotland (RBS, 2007) that actively use Maslow’s motivational theory may fail to effectively ‘reach out’ their more collectivist employees. Source: www.geert-hofstede.com

4. Summary Hofstede (1983) and Nevis (1983) both conclude that the hierarchy of needs developed by Maslow stresses individual achievement rather than collective, since it was developed on the basis of individualistic US model. However, Hofstede (1983) and Trompenaars (1993) agree that the American way of management does not apply across all cultures, especially as those in Asia. Living to our fullest potential is a universal theme and the route towards unlocking this potential and fulfilling it might be dependent on our cultural values. Therefore, the results of using Maslow’s model will differ in individualist and collectivist cultures. Further research is needed to establish whether the fulfilment of the individual in a non-Western, collectivistic culture is idealised in a different way (Ivtzan, I., Gardner, H. E., Bernard, I., Sekhon, M., & Hart, R., 2013).

5. Implications for Managers Individualistic countries desiring to invest in collectivist countries (e.g. China) can increase their profitability through understanding of collectivist culture and vice versa. Companies where management models are based on individualism shouldn’t force their management practices upon a collectivist environment. For example, in a collectivist culture like China, Nevis (1983) suggests that Chinese business practices should be governed by being a good member of society and placing group needs before individual needs. Therefore, a team-based organizational structure should be put in place by the investing firm.

The human resource management plan should also design a benefits plan that centres on the work group with a focus on housing, medical care, and education. Cultural research is important in human resource management in order to divide between individualistic and collectivistic cultures, allowing both to work efficiently and effectively, side by side, in the same organisational environment (Ivtzan, I., Gardner, H. E., Bernard, I., Sekhon, M., & Hart, R., 2013). Also, the human resource management plan should implement a comprehensive cultural training program designed to increase understanding and awareness of a collectivist culture to avoid confrontations and situations that would cause one to lose face (Gambrel, P. A.& Cianci, R., 2003). 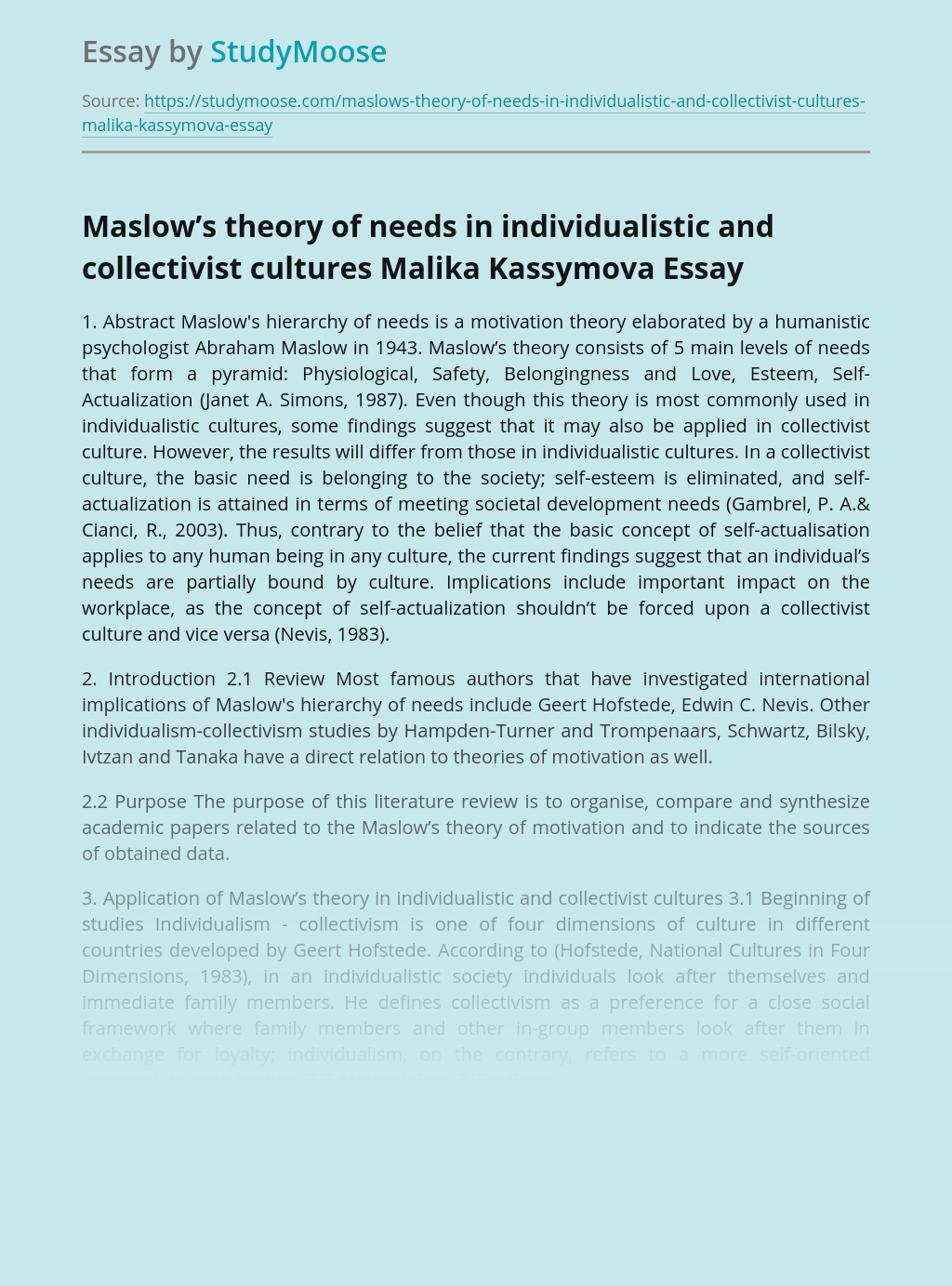 Turn in your highest-quality paper
Get a qualified writer to help you with
“ Maslow’s theory of needs in individualistic and collectivist cultures Malika Kassymova ”
Get high-quality paper
Helping students since 2015
Stay Safe, Stay Original